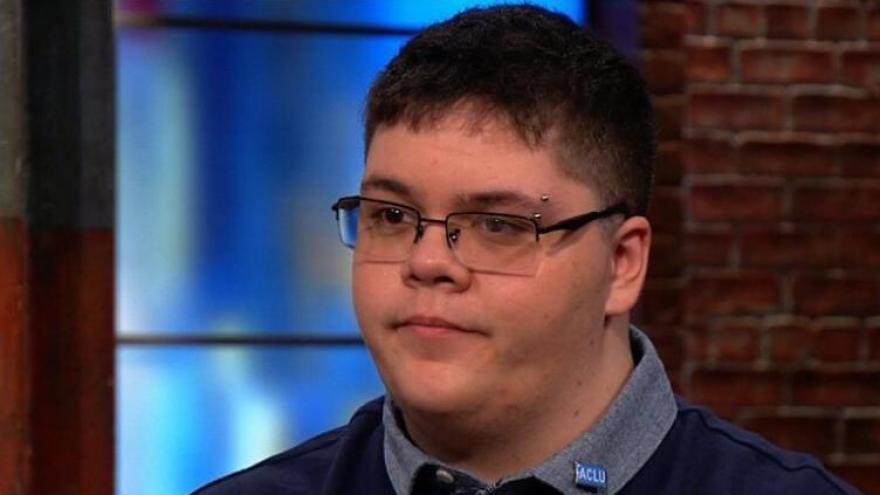 (CNN) -- The Supreme Court on Monday left in place a decision that allowed a transgender student to use the bathroom that corresponded to his gender identity, a victory for the LGBTQ community that has been fearful the high court would take up the case and reverse a lower court opinion.

The case concerns the scope of Title IX that prohibits schools from discriminating "on the basis of sex." It began when Gavin Grimm, a transgender male who was then a high-school student, challenged the local school board's decision to require him to use either a unisex restroom or a restroom that corresponds to the sex, female, he was assigned at birth.

Justice Clarence Thomas and Justice Samuel Alito said they would have taken up the case for next term.

"I am glad that my years-long fight to have my school see me for who I am is over. Being forced to use the nurse's room, a private bathroom, and the girl's room was humiliating for me, and having to go to out-of-the-way bathrooms severely interfered with my education," Grimm -- who has since graduated -- said in a statement Monday.

"Trans youth deserve to use the bathroom in peace without being humiliated and stigmatized by their own school boards and elected officials," he added.

The court's decision not to review an opinion by the 4th Circuit Court of Appeals means that public school students in the mid-Atlantic states covered by the 4th Circuit, as well as states governed by the 7th Circuit and the 11th Circuit, can use the bathroom that corresponds to their gender identity. The issue is unsettled in other states and another appeal could conceivably make its way back to the Supreme Court, although Grimm's legal fight is over.

Grimm filed suit against the board in 2015, arguing that the school's policy violated Title IX and the Equal Protection Clause. The Obama Justice Department filed a "statement of interest" accusing the board of violating Title IX. A federal appeals court deferred to the interpretation ruling in Grimm's favor. The school board appealed the decision to the Supreme Court, which agreed to take up the case.

Before the high court could rule, however, the Trump administration withdrew the Obama-era guidance, and the Supreme Court wiped away the decision by the 4th US Circuit Court of Appeals and sent the case back down for further proceedings. The case began again at the district court and ultimately the 4th Circuit again ruled in favor of Grimm, this time citing the Supreme Court's landmark decision in 2020 that held that federal employment law protects LGBTQ workers.

Grimm began fighting the Gloucester County School Board's policies when he was a sophomore at a Virginia high school in 2015. As part of Grimm's medical treatment for severe gender dysphoria, Grimm and his mother notified school administrators of his male gender identity and received permission for Grimm to use the boys' restroom for almost two months. But once the school board began receiving complaints, it adopted a new policy denying him access to the boys' bathrooms.

In 2019, a federal judge in Virginia also ruled in favor of Grimm, telling the school board it must recognize him as male and saying the board had violated his constitutional rights. The judge awarded him one dollar in damages and told the school district to pay his court fees. The district was also told it must update his records to indicate he is male.

"The larger question, which wasn't at issue in this case, is how the Justices are going to address circumstances where accommodations based upon sexual orientation or gender identity run headlong into compelling countervailing interests, such as the protection of religious liberty," Vladeck said. "Just as in the Bostock employment discrimination ruling from last Term, leaving the decision below in this case intact kicks that question down the road."

The decision means that, for now, the high court won't wade into the culture wars on a key issue for members of the transgender community, which has faced an onslaught of attacks this year by conservative lawmakers around the country seeking to impose restrictions trans people in everything from public school athletics to access to gender-affirming health care.

The transgender bathroom debate has long been a flash point for conservatives and it was brought to the forefront during the 2020 Republican National Convention by the Rev. Billy Graham's granddaughter Cissie Graham Lynch, who told viewers that "Democrats pressured schools to allow boys to compete in girls' sports and use girls' locker rooms." And more than half the country's states have introduced more than 100 bills that aim to curb the rights of transgender people.

Last month, Tennessee's GOP governor signed into law a measure that requires public schools to make "reasonable accommodation" for a person who cannot or will not use a restroom or changing facility designated for their sex in a public school building or at a school-sponsored activity, which LGBTQ advocates said will deny trans students access to facilities that are consistent with their gender identity.

Meanwhile, advocates filed a lawsuit against Tennessee last week seeking to challenge another recently approved law that requires some businesses in the state to post signs indicating that they allow transgender and other non-binary people to use the bathroom in their establishment that matches their gender identity, a policy LGBTQ advocates say is "offensive and humiliating" for members of the community and could lead to harassment.

In December, the Supreme Court declined to take up a case from parents in Oregon who challenged a public school's policy allowing a transgender student to use the bathroom that corresponded with his gender identity. In declining to take up the petition, the justices left in place an appeals court decision earlier that year that held that the school's policy intended to "avoid discrimination and ensure the safety and well-being of transgender students."