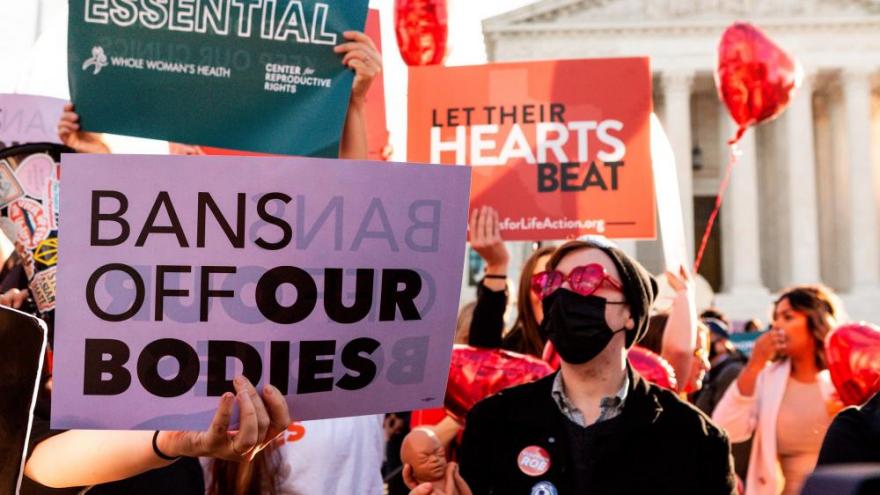 The Supreme Court will take up the most important abortion case in 30 years as the justices consider Mississippi's request to overturn Roe v. Wade and uphold a state law that bars the procedure 15 weeks after conception, as demonstrators hold rallies at the Supreme Court.

(CNN) -- The Supreme Court seemed poised Wednesday to uphold a Mississippi law that bars abortion after 15 weeks, but it is less clear if there is a clear majority to end the right to abortion nationwide, although conservative justices expressed skepticism about the landmark Roe v. Wade decision.

The dispute represents the culmination of a decades-long effort on the part of critics of the landmark opinion that legalized abortion nationwide to return the issue to the states, a move that would almost immediately eviscerate abortion rights in large swaths of the South and the Midwest.

Chief Justice John Roberts seemed to be looking for a middle ground to allow states to ban abortion earlier -- moving up the viability line from the current 22 to 23 weeks -- but leaving in place some remnants of a woman's right to end a pregnancy. He said 15 weeks was not a "dramatic departure" from viability.

Another key justice, Brett Kavanaugh, however, noted that even if the issue were returned to the states, abortion would still be available in some of those states. He conceded that supporters of abortion rights have a "forceful argument" but asked if there were two interests at stake, why the court should be the arbiter.

The court's other four conservatives were clearly critical of 1973's Roe v. Wade and 1992's Planned Parenthood v. Casey, which enshrined the right to abortions nationwide. Sixty percent of Americans say Roe should be upheld, according to an ABC News/Washington Post poll conducted in November.

Justice Clarence Thomas, who has already said that the believes Roe was wrongly decided, pressed each advocate to explain to him where the right to an abortion was found in the Constitution and suggested that if his colleagues did not overturn Roe, they would have a difficult job trying to come up with a new standard to guide lower courts. His fellow conservative, Justice Neil Gorsuch, also pressed the point that past precedent has been difficult for courts to administer.

But Justice Samuel Alito did seem to express some interest in the chief justice's middle ground suggestion, wondering if viability was a "principled line." Yet at another point he noted arguments from opponents of abortion who say the fetus "has an interest in having a life." He also rejected any notion that court's couldn't reject long-time precedent, especially if it was egregiously wrong.

The very fact that the current court, with its solid six-member conservative majority, agreed to even consider a state law that bars abortion long before viability suggests that the court -- bolstered by three of former President Donald Trump's appointees -- is poised to scale back court precedent if not reverse it outright. Already, in a separate dispute, the court is considering a Texas law that bars the procedure after six weeks and the justices have allowed that law to remain in place for three months, rendering Roe a dead letter in the country's second largest state.

Liberal Justice Sonia Sotomayor spent several minutes attacking the arguments of Mississippi's solicitor general, strenuously arguing that a woman's right to an abortion has been on the books for nearly 50 years and had been repeatedly reaffirmed. She suggested that if the court were to overturn the decision now despite the fact that "15 justices over 50 years" have reaffirmed the decision, it would suggest the change was solely due to the new composition of the court.

She worried that the public would perceive the court as political and expressed concerned that it couldn't survive such a "stench."

"The sponsors of this bill -- the house bill in Mississippi -- said we're doing it because we have new justices," Sotomayor said.

She also questioned whether other decisions pertaining to the right to contraception and gay marriage would also be in jeopardy. And she focused on the fact that if the issue were to return to the states, it would impact lower income women who wouldn't have the means to travel and would be at "tremendously greater risk."

For his part, Justice Stephen Breyer, another liberal, pushed repeatedly on the importance of the court standing by past precedent "grounded in principle."

Mississippi's Gestational Age Act, passed in 2018 but blocked by two federal courts, allows abortion after 15 weeks "only in medical emergencies or for severe fetal abnormality" and has no exception for rape or incest. If doctors perform abortions outside the parameters of the law, they will have their medical licenses suspended or revoked and may be subject to additional penalties and fines.

Mississippi Solicitor General Scott Stewart was blunt in his opening.

"Roe vs. Wade and Planned Parenthood versus Casey haunt our country," Stewart said. "They have no basis in the Constitution. They have no home in our history or traditions. They've damaged the democratic process. They poison the law. They've choked off compromise. For 50 years they've kept this court at the center of a political battle that it can never resolve and 50 years on, they stand alone. Nowhere else does this court recognize a right to end a human life."

Arguing for the Biden administration in support of the clinics, Solicitor General Elizabeth Prelogar urged the justices to uphold precedent and avoid a ruling that would disproportionally harm women who have come to depend upon the decision.

"For a half century, this Court has correctly recognized that the Constitution protects a woman's fundamental right to decide whether to end a pregnancy before viability," she argued. "That guarantee, that the state cannot force a woman to carry a pregnancy to term and give birth, has engendered substantial individual and societal reliance. The real-world effects of overruling Roe and Casey would be severe and swift."

She added: "The court has never revoked a right that is so fundamental to so many Americans and so central to their ability to participate fully and equally in society.

Lawyers for Jackson Women's Health Organization, the only licensed abortion clinic in Mississippi, and Sacheen Carr-Ellis, the clinic's medical director, told the justices there is no way to sustain the controversial law without effectively overturning Roe. They urged the court to "reject the invitation to jettison a half-century of settled precedent."

"Accepting Mississippi's request to abandon the viability line would turn back the clock for generations who have never known what it means to be without the fundamental right to make the decision whether to continue a pregnancy," Julie Rikelman, the senior litigation director for the Center for Reproductive Rights who is representing the clinic, argued in court papers.

The case comes as states hostile to Roe across the country are moving aggressively to pass abortion restrictions.

"Over 100 restrictions passed this year," said Nancy Northup, president of the Center for Reproductive Rights, said in a conference call with reporters before the arguments.

She noted that 54,000 to 63,000 people get abortions after 15 weeks every year in the US and that if Roe were overturned, nearly half the states would ban abortion entirely. Twelve states have so called "trigger" laws in place designed to ban abortion immediately. Nine more have pre-Roe bans on the books and the rest have legislatures historically hostile to Roe.

A district court had blocked the Mississippi law, holding that it is in direct violation of Supreme Court precedent legalizing abortion nationwide prior to viability, which can occur at around 23-24 weeks of pregnancy.

A panel of judges on the 5th US Circuit Court of Appeals agreed with the district court holding that in an "unbroken line dating to Roe v. Wade, the Supreme Court's abortion cases have established (and affirmed and re-affirmed) a woman's right to choose an abortion before viability." The court said states may "regulate abortion procedures prior to viability" so long as they do not ban abortion. "The law at issue is a ban," the court held.

Mississippi appealed the decision to the Supreme Court, and after the justices agreed to hear the case, the state raised the stakes and argued that the justices should not only uphold the law but also invalidate Roe and Casey.