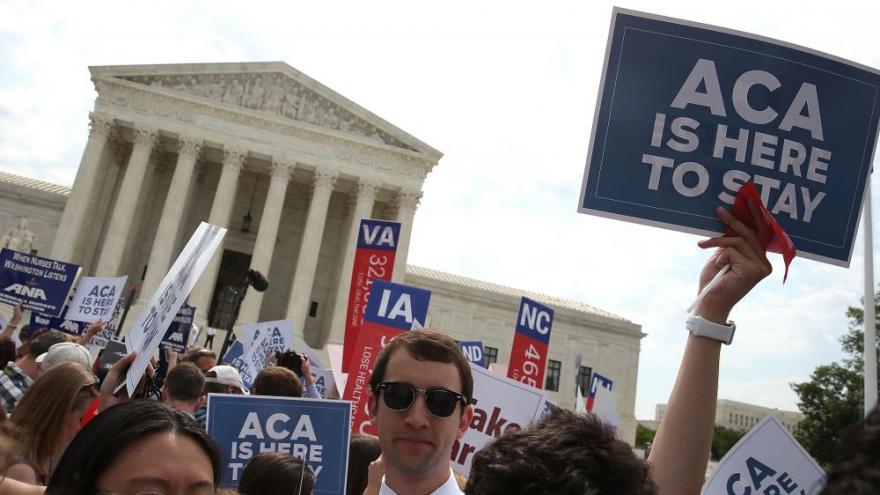 Supreme Court hears oral arguments on the future of Obamacare.

(CNN) -- Chief Justice John Roberts and Justice Brett Kavanaugh suggested Tuesday that it wasn't the Supreme Court's role to invalidate the entire sprawling, 900-page Affordable Care Act, even if one or more provisions are deemed unconstitutional, signaling the key parts of Obamacare will survive the latest court challenge.

As the pandemic rages, President Donald Trump lashes out at election returns and President-elect Joe Biden prepares for a new administration, the Supreme Court heard oral arguments to discuss whether to invalidate the linchpin of the nation's health care system.

The Trump administration and several Republican-led states are asking the court to strike down the law, 10 years after it was passed, potentially impacting millions of Americans. Should Roberts and Kavanaugh, at the very least, side with the court's three liberals, the law would remain intact.

Roberts said simply that if Trump and Republicans wanted to kill the law, they could have done it.

"I think it's hard for you to argue that Congress intended the entire act to fall if the mandate was struck down when the same Congress that lowered the penalty to zero did not even try to repeal the rest of the act," Roberts told the attorney representing Texas, one of the states fighting the law.

"I think, frankly, that they wanted the court to do that, but that's not our job," Roberts added.

At another point Kavanaugh told a lawyer supporting the law that he agreed with his position that some provisions could be severed if necessary. "I tend to agree with you on this very straightforward case for severability," he said.

Roberts and other justices began their questions asking whether the individual plaintiffs and Republican-led states can show that they have the legal injury necessary to allow them to bring the challenge to the law. This discussion on standing is a dry legal concept but it could be critical.

Supporters of the law say the challengers have no legal injury because after Congress amended the law in 2017 there is no longer a penalty for failing to buy health insurance. Lawyers for the Democratic-led states and the House of Representatives say the court should therefore dismiss the challenges

But several of the justices floated hypotheticals suggesting that even if there was no longer a penalty for not following a regulation there could still be an injury, suggesting that a challenge could be brought.

Justice Clarence Thomas, for instance, asked about a potential regulation that required someone to wear a mask, even if there were no penalty for a failure to do so.

"What if someone violates that command, let's say it's in similar terms to the mandate here but no penalty, would they have standing to challenge the mandate to wear a mask?" Thomas asked.

So far, the justices have lain low, avoiding any significant participation in post-election litigation, but now all eyes will be on the court as it sorts through the most controversial case of the term, which could impact tens of millions of Americans -- including roughly 20 million who have gained coverage over the law's exchanges and the expansion of Medicaid to low-income adults.

Also at risk are popular provisions that protect those with preexisting conditions as well as those that allow parents to keep their children on their health insurance plans until the age of 26.

Third time back at the court

The dispute pits California and other Democratic-led states against Texas and Republican-led states plus the Trump administration.

This is the third time the court has heard a significant challenge to the law, although this time the stakes are heightened given the implications of Covid-19, the catastrophic deaths and the current burdens facing the health care industry.

In 2012, Roberts cast the key vote in a 5-4 decision that stunned Republicans, holding that the law's individual coverage mandate was valid under Congress' taxing power. By 2017, the Republican-led Congress cut the tax penalty for those who lacked insurance to zero as part of the year-end tax overhaul.

The Republican-led states sued, arguing that since the mandate was no longer tied to a specific tax penalty, it had lost its legal underpinning. They also argued that because the individual mandate was intertwined with a multitude of other provisions, the entire law should fall, including protections for people with preexisting conditions.

Last December, a federal appeals court held that the individual mandate was unconstitutional. But critically, the court punted on whether the rest of the massive law -- even provisions unrelated to the mandate -- could remain on the books.

In court, Texas Solicitor General Kyle D. Hawkins said the 2017 change made the individual mandate unconstitutional. "It is a naked command to purchase health insurance, and, as such, it fall outside Congress' enumerated powers," he said. "The proper course is to take Congress at its word and declare the mandate unconstitutional and inseverable from the remainder of the ACA," he said.

Acting Solicitor General Jeffrey Wall sided with Texas on the issue, arguing that the mandate "exceeded" Congress' powers. The government is making the relatively new argument that the entire law should fall but the ruling should apply only to the 18 states that brought the challenge. Texas told the justices that it thinks the Justice Department's narrowed remedy would cause chaos and require that the states bringing the challenge heavily subsidize other states.

During the presidential campaign, Trump repeatedly said he would come up with an alternative but never issued any substantive details. His three Supreme Court appointees -- Justices Neil Gorsuch, Kavanaugh and Amy Coney Barrett -- will play a key role in deciding the future of the law.

Barrett, before taking the bench, expressed criticism concerning Roberts' original reasoning to uphold the law. But during her confirmation hearings last month she declined to tip her hand as to how she might rule on the dispute.

In court Barrett too, zeroed in on the intent of Congress in 2017.

"So what should we make of the fact that Congress didn't repeal the provision?" she asked.

At another point she noted that Congress was "free" to come back in and better explain what it meant to do.

Supporters of the Affordable Care Act think the court should uphold the entire law. But in case it does strike down the mandate, they stress that Congress never meant to bring down the entire law when it made changes in 2017.

"Congress made a single surgical change," California Solicitor General Michael Mongan told the justices. He stressed that the rest of the law should remain in effect if the mandate is struck "because that's the very framework Congress itself already created."

Former US Solicitor General Donald Verrilli, arguing on behalf of the House of Representatives, argued that the two individuals and Republican-led states do not have the legal injury necessary to bring the challenge. He said that now that Congress has brought the penalty down to zero, those who refuse to buy health insurance are no longer faced with a tax for failing to do so.

"There is just no way that Congress would have preferred an outcome that throws 23 million people off their insurance, ends protections for people with preexisting conditions and creates chaos in the health care sector," he said.

Justice Elena Kagan seemed to agree. "A lot of legislation now is in these huge packages," she said, "and it would seem a big deal to say that if you can point to injury with respect to one provision and you can concoct some kind of inseverability argument, that it allows you to challenge anything else in the statute."

Justice Samuel Alito suggested at one point that the law had been functioning since the mandate had been brought to zero. Referencing an airplane, he said, "the plane has not crashed" without the individual mandate.

Roberts pressed Verrilli, who had argued in favor of the law when he served as solicitor general for the Obama administration, on the fact that back then the government had repeatedly stressed how important the individual mandate was to the entire law. On Tuesday Verrilli argued the opposite. "Why the bait and switch?" Roberts asked.

Twice in the previous court term, the justices relied on severability doctrine to save laws after finding individual provisions unconstitutional. In one case Roberts wrote, "We think it clear that Congress would prefer that we use a scalpel rather than a bulldozer."

In another case, Kavanaugh pressed his belief that the court in the case at hand should work to "salvage rather than destroy" a law with an unconstitutional provision.

Some legal experts doubt that the justices would strike the down the whole law.

Notre Dame Law professor Richard Garnett, who is close with Barrett, said in a statement that he doubted the court would invalidate the entire law. "Although in 2017 Congress lowered to zero the penalty for failing to comply with the so-called 'individual mandate,' there is very little chance that a majority of the justices will conclude that this move renders the entire ACA -- including portions dealing with coverage for pre-existing conditions -- unconstitutional," he said.

And although Biden was vice president when the law passed, experts say the fact that the Senate may remain majority Republican will complicate his efforts to save the law.

"Biden would need to pass a law to kick the case to the curb," said Nicholas Bagley, professor of law at the University of Michigan Law School.

Bagley said such a law would be "simple" to draft. "Congress could increase the tax penalty to a nominal amount (say, $1); it could eliminate the language telling people to buy insurance; or it could add a severability clause. Any one of those laws would kill the case," he said.

"If Republicans still control the Senate after this election, they're unlikely to play ball. Whatever the Supreme Court says is likely to stick."

Near the end of the arguments, Wall, perhaps making the Trump administration's last significant argument before the Supreme Court in a blockbuster case, said that the individual mandate "exceeds Congress' enumerated powers" and that the court should leave it up to the "political branches to decide how to proceed."

This story has been updated with further developments Tuesday.