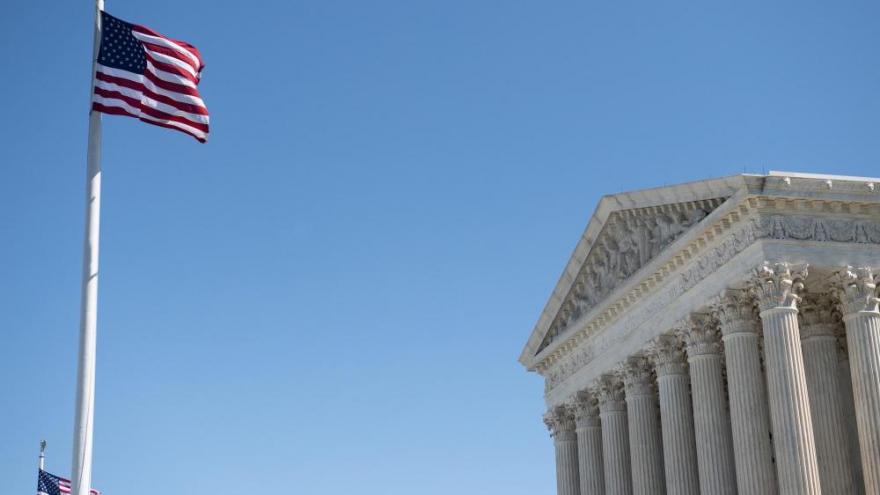 (CNN) -- In a win for the Department of Homeland Security, the Supreme Court said Thursday that a Sri Lankan farmer who lost his bid for asylum in the United States after immigration officials ordered his removal could not challenge that decision in federal court.

The ruling will keep courthouse doors closed to asylum seekers in expedited removal processes who say they cannot return home because they have a credible fear of torture or even death.

The ruling is a win for the Trump administration, which has attempted to dramatically limit who's eligible for asylum in the US, though it likely won't have an immediate impact since the vast majority of asylum seekers are currently barred from entering the country following new coronavirus border restrictions.

Seven justices sided with the government in the case, but only five -- all conservatives -- signed onto the majority opinion penned by Justice Samuel Alito.

Alito said that the petitioner in the case, Vijayakumar Thuraissigiam, "does not want 'simple release' but, ultimately, the opportunity to remain lawfully in the United States."

"If courts must review credible-fear claims that in the eyes of immigration officials and an immigration judge do not meet the low bar for such claims," he wrote, "expedited removal would augment the burdens on that system."

The ruling could stand to affect many asylum seekers in the future by stripping away the opportunity to go to federal court to contest a negative finding by immigration officials.

Currently, undocumented immigrants who are caught within 100 miles of a land border and within 14 days of arrival are subject to an expedited removal process and can be ordered removed without further hearing or review. If the individual seeks asylum, however, he or she is provided additional screening before an asylum officer, a supervisory officer and an immigration judge to determine whether the person has a credible fear of persecution or torture if returned to his or her home country.

"This is a devastating blow to the due process rights of asylum seekers who arrive at our border seeking protection," said Aaron Reichlin-Melnick, policy counsel at the American Immigration Council.

The Trump administration wants to include undocumented immigrants anywhere in the US who cannot prove they've lived in the US continuously for two years or more. A federal judge has blocked the move but proceedings are ongoing.

"This throws a lot of questions into what rights individuals who have developed strong ties to the community have and whether this decision would undermine those rights," Reichlin-Melnick said.

Thuraissigiam, a member of an ethnic minority group in Sri Lanka, entered the US illegally and was arrested 25 yards north of the Mexican border. He applied for asylum, telling the officer that he had been working at his farm in his home country when a group of men apprehended him and severely beat him. He said he didn't know who they were and why they had chosen him. He was denied the chance to seek asylum.

The asylum officer determined he had not established a credible fear of persecution, a decision affirmed by the supervising officer and the immigration judge. Under the law, after the denial, Thuraissigiam was ineligible to challenge the finding in federal court.

Thuraissigiam's lawyers at the ACLU went to federal district court arguing that the expedited removal outlined in the law violated his due process rights stripping him of a "meaningful opportunity" to establish his claims.

"Every person within US territory is entitled to due process," ACLU lawyer Lee Gelernt told the justices.

The 9th US Circuit Court of Appeals agreed, holding that the law violated a part of the Constitution called the Suspension Clause, that would allow Thuraissigiam, even as a non-citizen, to have the opportunity to challenge his detention.

Gelernt said Thursday's Supreme Court's ruling "fails to live up to the Constitution's bedrock principle that individuals deprived of their liberty have their day in court, and this includes asylum seekers. This decision means that some people facing flawed deportation orders can be forcibly removed with no judicial oversight, putting their lives in grave danger."

The Suspension Clause prohibits the government from depriving someone of their liberty without the opportunity for a court to review the legality of the government's action.

In court, lawyers for the Trump administration pointed to past precedent distinguishing between an individual who has lawfully entered the country and become part of the population, and someone who had entered only clandestinely and been in the country less than two years. They said the law outlining expedited removal had been passed so that the system would not be abused.

Thursday, Alito wrote that Thuraissigiam "has only those rights regarding admission that Congress has provided."

He said that Congress provided Thuraissigiam the right to a determination whether he had a significant possibility for establishing a claim for asylum and that he was "given that right."

In a strong dissent, Justice Sonia Sotomayor said the impact of the majority opinion could have broader consequences for US immigration law and how noncitizens or undocumented immigrants are treated.

"Taken to its extreme, a rule conditioning due process rights on lawful entry would permit Congress to constitutionally eliminate all procedural protections for any noncitizen the Government deems unlawfully admitted and summarily deport them no matter how many decades they have lived here, how settled and integrated they are in their communities, or how many members of their family are U.S. citizens or residents," Sotomayor wrote in her dissent, joined by fellow liberal Elena Kagan.

"This judicially fashioned line-drawing is not administrable, threatens to create arbitrary divisions between noncitizens in this country subject to removal proceedings, and, most important, lacks any basis in the Constitution."

The ruling "handcuffs the Judiciary's ability to perform its constitutional duty to safeguard individual liberty and dismantles a critical component of the separation of powers."

She said it will leave "exercises of executive discretion unchecked" and that the Court "justifies its decision by pointing to perceived vulnerabilities and abuses in the asylum system."

But, she said, "asylum laws have represented the best of our Nation," and that while it is "universally acknowledged that the asylum regime is under strain" the political branches have tools to reform the system.

"The role of the Judiciary is minimal, yet crucial: to ensure that laws passed by Congress are consistent with the limits of the Constitution."

"The Court today ignores its obligation," she said.

The opinion and dissent was handed down on Sotomayor's 66th birthday.

Traditionally, the justices would celebrate birthdays with a toast at their regularly scheduled private session at the court. But with the coronavirus pandemic shutting down the courthouse, justices are meeting only by telephone.

This story has been updated with more from the opinion.