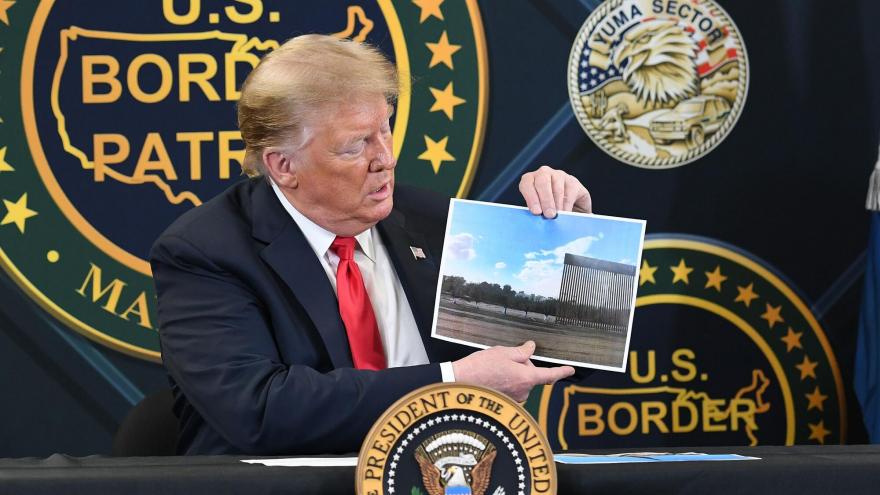 US President Donald Trump shows a photo of the border wall upon arrival at the US Border Patrol station in Yuma, Arizona, June 23, 2020.

(CNN) -- The Supreme Court said on Monday it would take up cases concerning President Donald Trump's border wall and a controversial policy that requires asylum seekers to remain in Mexico as they await hearings in the United States.

The border wall and asylum policy, informally known as "remain in Mexico," have been cornerstones of the Trump administration's immigration agenda. While the cases likely won't be considered until next year, the move to take up both cases comes just weeks before the presidential election in which Trump has been touting the wall and efforts to stop undocumented immigrants from entering the US.

The border wall case concerns the Trump administration's attempts to transfer Pentagon funds to build additional barriers along the US-Mexico border. Lower courts have ruled that the administration doesn't have the authority to transfer $2.5 billion in funds. But in a previous order, the Supreme Court allowed the construction to continue while the appeals process plays out.

Similarly, the Supreme Court allowed the controversial "Remain in Mexico" asylum policy that mandates that non-Mexican asylum seekers return to Mexico until their immigration proceedings in the US to stay in effect pending appeals. The policy has been struck down by lower courts.

The Trump administration's immigration policies have faced a slew of legal challenges, including its attempt to roll back the Deferred Action for Childhood Arrivals Program, which also landed before the Supreme Court and was blocked.

The latest two cases that will be heard by the court are specific to the US-Mexico border.

The dispute over the border wall concerns a challenge to the use of $2.5 billion from the Pentagon to construct parts of the wall along the southwestern border -- stretching across three states, including protected public land.

After Congress rejected the bulk of the administration's funding requests throughout 2018, Trump in February 2019 declared a national emergency on the southern border and the Department of Homeland Security submitted a request for Defense Department assistance with the construction of "fences, roads and lighting" to block drug-smuggling corridors.

Environmental groups, represented by the American Civil Liberties Union, as well as lawyers for California and New Mexico, argued that the secretary had exceeded his authority in attempting to circumvent Congress.

The administration says that the transfer of funds was legitimate for national security purposes. "The challenged transfers have allowed DOD to undertake the construction of more than 100 miles of fencing (and associated roads and lighting) in areas identified by DHS as drug smuggling corridors, where DHS has seized thousands of pounds of heroine, cocaine, and methamphetamine between ports of entry in recent years," the Justice Department said in court papers.

A federal appeals court ruled against Trump, but the opinion had no immediate impact because of a Supreme Court order, 5-4, from last year that allowed construction to continue while the legal challenges played out.

Dror Ladin, senior staff attorney with the ACLU's National Security Project, reacted to the Supreme Court's decision Monday, saying: "We look forward to making the same case before the Supreme Court and finally putting a stop to the administration's unconstitutional power grab."

As of October 9, the administration has completed roughly 360 miles of border barriers, of which about 15 miles have been constructed where no barriers previously existed, according to figures from US Customs and Border Protection.

Just as the Trump administration has touted the wall, officials have also credited the "remain in Mexico" policy for helping stem the flow of migration despite a record number of arrests last year.

In court briefs, Acting Solicitor General Jeffrey Wall said that since the program has gone into effect it has been "extremely effective" at reducing the strain on the United States' immigration detention capacity and improving efficient resolution of asylum applications.

The challengers -- 11 asylum seekers fleeing situations of extreme violence in Central America and represented by the ACLU -- urged the court not to take up the case and to allow the lower court opinion to stand. They note in briefs that as a result the coronavirus pandemic, there is no longer urgency because of a public health order that's led to the swift removal of migrants, including asylum seekers, apprehended at the border.

"Asylum seekers face grave danger every day this illegal and depraved policy is in effect. The courts have repeatedly ruled against it, and the Supreme Court should as well," Judy Rabinovitz, ACLU attorney and lead counsel in this lawsuit, said Monday.

Department of Justice spokesperson Alexa Vance defended the program in a statement Monday, saying: "The Migrant Protection Protocols program -- which is expressly authorized by a statute passed by a bipartisan Congress and signed into law during the Clinton administration, but never used until the Trump Administration -- has been a critical component of our efforts to manage the immigration crisis on our Southern Border. The Department is pleased that the Supreme Court has granted our petition and will be reviewing this case."

CNN legal analyst and University of Texas law school professor Steve Vladeck said the timing of the court's action means a change in administration and policy could render the lawsuit moot.

"What's especially interesting is the timing," Vladeck said. "The court waited a couple of weeks to grant at least the asylum case, which means it likely would not be argued before February of next year. By that point, it could very well be moot if Trump isn't reelected."