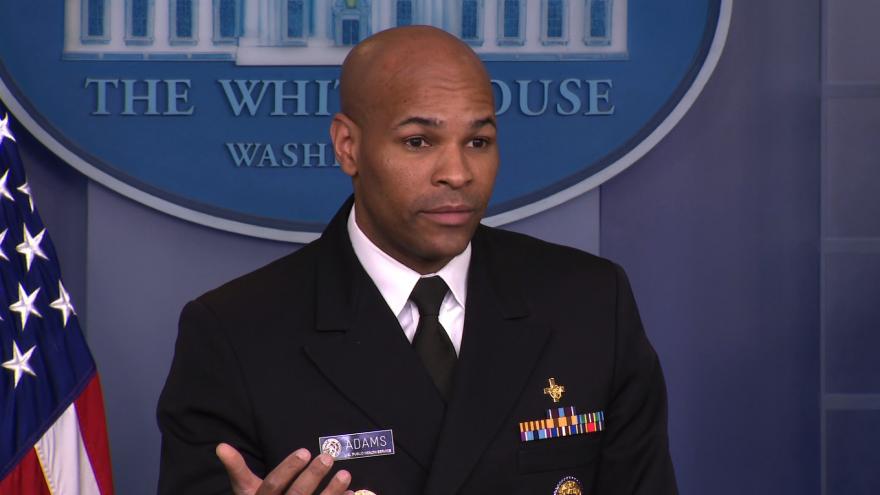 US Surgeon General Dr. Jerome Adams said to expect new outbreaks of the coronavirus resulting from the nationwide protests over the death of George Floyd that have seen thousands of people gather in close proximity. Credit: CNN
By Veronica Stracqualursi, CNN

(CNN) -- US Surgeon General Dr. Jerome Adams said to expect new outbreaks of the coronavirus resulting from the nationwide protests over the death of George Floyd that have seen thousands of people gather in close proximity.

While a majority of protesters nationwide have worn masks and face coverings as they demand justice for Floyd, an African-American man who died last week while in police custody, the large crowds have made it difficult to social distance. The coronavirus pandemic has also disproportionately affected communities of color, an issue Adams has highlighted.

"I remain concerned about the public health consequences both of individual and institutional racism [and] people out protesting in a way that is harmful to themselves and to their communities," Adams told Politico in an interview published Monday.

"Based on the way the disease spreads, there is every reason to expect that we will see new clusters and potentially new outbreaks moving forward," he added.

Adams is the latest government leader to express concern over whether the protests could spread coronavirus, as he and other health groups are caught in a balancing act of trying to advise Americans during a pandemic and raise awareness of how racism puts the black community's health at risk.

"You understand the anger, you hope that we can find ways that really can help people channel their anger into meaningful steps forward," Adams, who's African-American, told Politico.

On Saturday, Adams said there's "no easy prescription to heal our Nation, or to take away the pain people are feeling" — a pain that he too is experiencing as a black man.

"We won't fix or remove all the obstacles and stressors that are affecting people's health and wellbeing - especially ones like racism- over night. That doesn't mean we mustn't try at all," he posted on Twitter.

As the protests have continued, several doctors' groups -- the American Academy of Pediatrics, American Medical Association and American College of Physicians -- emphasized that racism is a public health issue and called for police brutality to stop.

CNN's chief medical correspondent Sanjay Gupta said on CNN Tuesday that the US may not see the impact of the protests on coronavirus infection rates and hospitalizations until three to four weeks later.

He noted that there's a number of different factors to consider such as the environment of the protests, which have taken place outside, a lower risk for transmission of the virus.