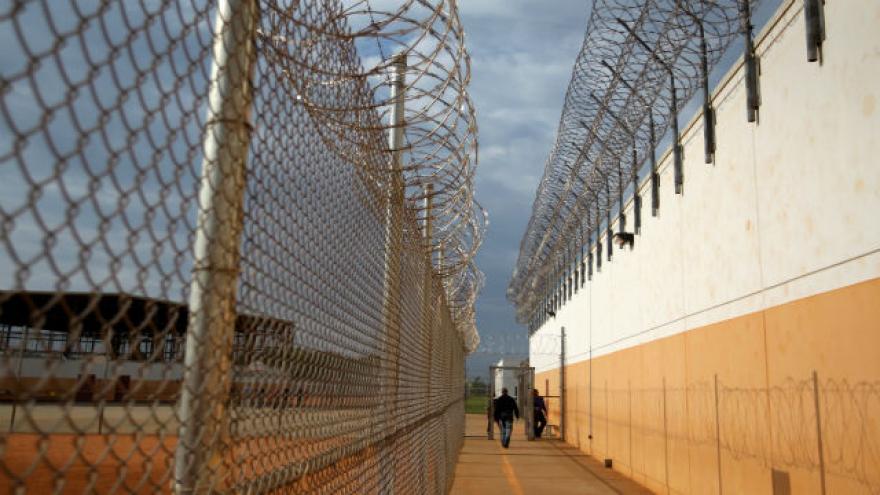 Some detainees reported long waits for medical care at the Stewart Detention Center in Lumpkin, Georgia, according to the Department of Homeland Security\'s Office of Inspector General. Photo courtesy Jonathan Wiggs/Boston Globe/Getty Images

"We identified problems that undermine the protection of detainees' rights, their humane treatment, and the provision of a safe and healthy environment," the Department of Homeland Security's Office of Inspector General said in a report released Thursday.

The report, based on unannounced inspections by the independent office, comes as the Trump administration pushes to expand the use of detention facilities to hold immigrants who are in deportation proceedings.

Officials said investigators conducted the surprise inspections in response to concerns raised by immigrant rights groups and complaints to the inspector general's hotline.

The Laredo facility "modeled quality conditions," according to the report, but inspectors found "significant issues" at the other four facilities.

Among the report's findings:

• Delayed medical care: "Some detainees at the Santa Ana City Jail and Stewart Detention Center reported long waits for the provision of medical care, including instances of detainees with painful conditions, such as infected teeth and a knee injury, waiting days for medical intervention," the report says. At times, "language barriers prevented detainees from understanding medical staff."

• Possible misuse of solitary confinement: The report identified violations of ICE detention standards in the way several facilities separated detainees from the general population, a practice officially known as disciplinary or administrative segregation.

"Staff did not always tell detainees why they were being segregated, nor did they always communicate detainees' rights in writing or provide appeal forms for those put in punitive lockdown or placed in segregation."

Medical visits and meal records also weren't properly documented, the inspectors found. "Some of these issues may simply be a matter of inadequate documentation, but they could also indicate more serious problems with potential misuse of segregation," the report says.

• Improper treatment of detainees: "At four facilities, detainees alleged in interviews that staff mistreated them, citing guards yelling at detainees, as well as using disrespectful and inappropriate language," the report says.

At the Stewart Detention Center, some detainees reported that staff interrupted or delayed Muslim prayer times.

• Problems with facility conditions: "At Otero County Processing Center and Stewart Detention Center, we observed detainee bathrooms that were in poor condition, including mold and peeling paint on walls, floors and showers," the report says.

"At the Stewart Detention Center, some detainee bathrooms had no hot water and some showers lacked cold water. Also, detainees reported water leaks in some housing areas."

Activist: 'We can't look away'

Activists, who've long documented what they say are inhumane conditions inside detention centers, pointed to the report as corroborating proof that immigrants should be released from such facilities immediately.

"A lot of the things that were found ... are horrifying," she said. "They're not small procedural problems. They're things that are actually extremely dangerous for people who are detained."

Small said she'd be flagging the report's findings to lawmakers on Capitol Hill, who are still hashing out funding appropriations for the current fiscal year, which started October 1 and runs through September 2018.

The inspector general's office said some of the issues violated ICE's own detention standards and recommended the agency develop processes to review specific areas, including facility conditions, detainee care and classification, use of language services, use of segregation and disciplinary actions, and compliance with grievance procedures.

In its official response to the report, ICE said it agreed with the recommendation.

"Special emphasis in these areas will strengthen ICE's existing system of oversight and compliance and improve overall conditions of detention," ICE said.

"ICE maintains a rigorous and multifaceted inspection schedule for its detention facilities, and local field management is responsible for the aforementioned areas identified in the recommendation," Chief Financial Officer Stephen Roncone wrote.

Thousands of ICE detainees are held in immigration detention facilities across the United States, many of which are operated by private prison companies.

Two facilities highlighted in the report are operated by private prison company CoreCivic: Laredo, which drew praise from inspectors, and Stewart, where inspectors documented a number of issues.

"We believe the issues identified at Stewart Detention Center can be quickly and effectively remedied," CoreCivic spokesman Jonathan Burns said in a written statement to CNN.

"CoreCivic cares deeply about every person entrusted to our care," Burns said, noting that detainees in its facilities have access to medical vaccinations, legal assistance and education opportunities.

Management & Training Corporation, which operates the Otero County Processing Center, said its most recent audit showed the facility complies with all national standards, "including the humane and dignified treatment of detainees."

The facility's bathrooms are "well maintained, clean and in good working order," company spokesman Issa Arnita said in a written statement to CNN.

"While the need to segregate detainees is rare, if required we follow proper procedures for administering, justifying, and documenting these instances," he said.

The agencies that operate the Santa Ana City Jail and the Hudson County Jail did not immediately respond to requests for comment.