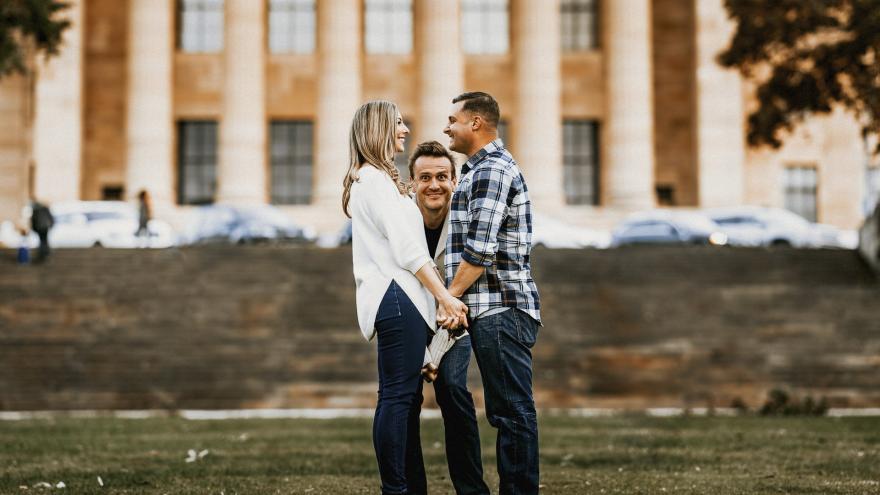 This photobomb will be a talking point for the couple for years to come.
Originally Published: 23 OCT 19 21:46 ET
By Lauren M. Johnson, CNN

(CNN) -- An engaged couple was minding their own business, getting their photos taken in Philadelphia, when suddenly a celebrity joined in one of their pictures.

Megan Monaco and Joe Setrow were visiting from Norfolk, Virginia, taking engagement pictures in front of Philadelphia's famous art museum when a familiar face jumped into the frame with them. Jason Segel, in town filming a movie, straight up photobombed their Saturday shoot.

"You don't expect something like that to happen ... and then it does, and it was so fun," Monaco told CNN.

Segel, best known for his roles in "How I Met Your Mother" and "Freaks and Geeks," had been walking around the area before deciding to be in the picture.

"We waved hi to him ... and then he started walking over to us," Monaco said. "Then he said, 'Just keep doing what you're doing I'll get in a photo with you!'"

Oddly enough, the photographer, Eric Talerico, had no idea who he was.

"He is the only one of my photographers who wouldn't recognize him," Twisted Oaks Studio owner Jay Cassario told CNN. "I'm just kind of jealous it didn't happen to me."

Cassario said that as a photographer, getting a perfect focus on the first shot is relatively difficult, and the photographer nailed it.

After the photobomb, Segel shook hands with the couple and went about his way, not hanging out for too long.

But the photo will be a talking point for the couple for years to come.

"We had such a great day. ...That was just something extra to make it special," Monaco said.