Suspect in deadly shooting of Kentucky officer killed by police 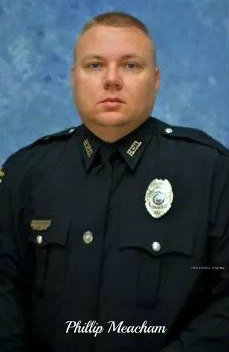 According to the TBI, James Kennith Decoursey refused to obey commands from officers, which is when the situation escalated and the officers opened fire on Wilma Rudolph Boulevard in Clarksville just after midnight.

Authorities said the officers first found the vehicle Decoursey had stolen in a parking lot at Exit 4 off Interstate 24. After receiving a call from the hotel across the street reporting that a man who matched Decoursey's description was there asking for a cigarette, the officers found Decoursey crossing Wilma Rudolph Boulevard.

"Decoursey appears to have ignored repeated commands and the situation escalated, resulting in the law enforcement officers firing upon Decoursey, killing him," said the TBI in a statement.

Two Montgomery County deputies and a U.S. Marshal opened fire on Decoursey. None of the officers were injured in the incident. Their names have not been released by authorities.

The TBI joined the investigation into the shooting of Decoursey at the request of 19th District Attorney General John Carney. The agency will hand over their findings to the district attorney general, who will decide on the legality of the officers' actions.

According to Kentucky State Police, Decoursey was impersonating a police officer when he pulled over off-duty Hopkinsville Officer Phillip Meacham at 5:10 p.m. Thursday on Paulette Court in Hopkinsville, KY.

During the incident, 38-year-old Meacham was shot and killed.

After the shooting, Decoursey reportedly fled the scene and stole a white Chevrolet pickup truck.

Decoursey, 35, has a history of arrests in Kentucky. News4 found that Decoursey has charges dating back to a burglary charge in 2002. He was also charged with fraudulent use of credit cards in 2007.

Decoursey has been arrested five times for possession of methamphetamine. On one occasion, Decoursey appealed on the basis his home was searched illegally. A judge found the search was justified.

Meacham had worked with the Hopkinsville Police Department since May 2017. He previously worked for 12 years with the Christian County Sheriff's Office. Meacham has two school-aged children.

Kentucky Gov. Matt Bevin tweeted about the officer's death, saying, "There is no greater sacrifice than that of a person willing to lay down their life for another."

The Associated Press reported the lawmakers in the House stood for a moment of silence after Rep. Walker Wood Thomas of Hopkinsville announced that an officer had been shot.

On Friday morning, police officers will be escorting Meacham's body from the Medical Examiner's Office in Madisonville through downtown Hopkinsville to Lamb's Funeral Home on Lafayette Road. The procession will exit the Pennyrile Parkway on to the bypass, to North Main, to Country Club, then Lafayette Road and then to the funeral home. The intersections along this route will be blocked off during this time.

A fund has been set up to raise money for Meacham's family. Click here for more information about how to donate.

The Hopkinsville Police Department has released this statement: "Our hearts are heavy this morning as we mourn the loss of our brother and friend, Officer Phillip Meacham. We have placed his patrol vehicle in front of the Police Department for citizens to bring flowers, cards or anything else they may want to place on it. We will also be holding a candlelight vigil in the days to follow and will let everyone know when this will be. We ask in the meantime that you continue praying for the Meacham family and all those that are hurting from this loss."