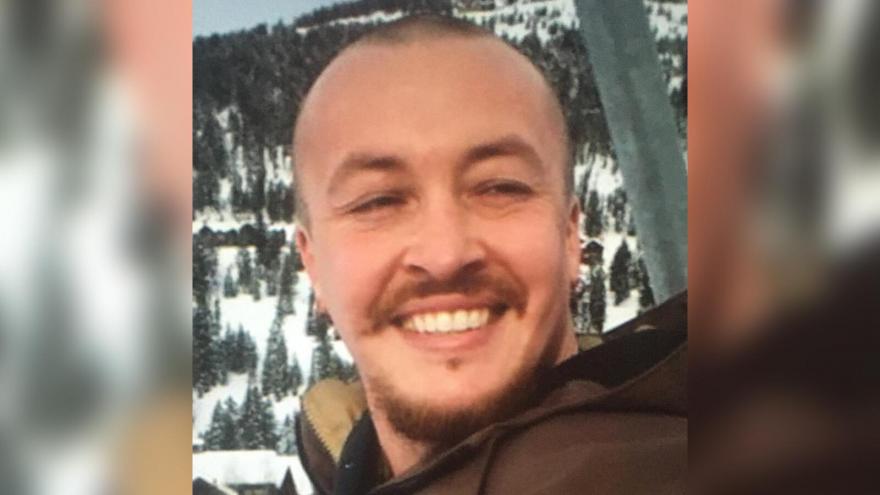 The Portland protests shooting victim was identified as Aaron Danielson.

(CNN) -- A Portland man who was killed Thursday night while authorities attempted to apprehend him on a murder warrant appeared to admit he was responsible for the fatal shooting of a supporter of a right-wing group during clashes between pro-Trump groups and left-wing protesters in the Oregon city.

The US Marshals said a task force was attempting to arrest Michael Forest Reinoehl in Washington state. He was wanted by the Multnomah County Circuit Court on a charge of second-degree murder.

"Reinoehl was allegedly involved in an August 29 shooting incident in Portland, Oregon, that resulted in a death," US Marshals said.

Multnomah County District Attorney Mike Schmidt said Portland police searched Reinoehl's home and found ammunition of the same caliber used in the fatal shooting and clothes that matched what Reinoehl was wearing on the night of the incident.

Reinoehl's sister, who asked that her name not be used, said in a statement that her "estranged" brother "believed that the country is going to war."

"He believed the war was here, and look at where that got him; where it got us," she said. "Two men are dead. He is one of them. Two families have been thrown into the chaos, and everyone seems more up in arms than ever... I believe the peaceful majority are stronger than that. We have the strength to choose. We can still choose peace, and we can change the course of things through open communication."

Referring to threatening messages she and her family received recently, she added: "It was hard to look hatred in the eye and choose not to reflect it back when so much was directed our way, but under all the bitterness, we are all people. People who are angry, scared, and bitter. But we are more than that. And we are stronger than the forces tearing us apart."

Her brother lost sight of that somewhere along the way, she said.

"I wish it had never happened, and now, we just want peace."

The task force located Reinoehl in Olympia, Washington, and attempted to arrest him.

"Initial reports indicate the suspect produced a firearm, threatening the lives of law enforcement officers. Task force members responded to the threat and struck the suspect who was pronounced dead at the scene," the statement said.

None of the task force members were injured.

Deshirlynn Chatman, who was arriving at the apartment complex at the time, told reporters Friday that Reinoehl left an apartment and got in his car before attempting to flee on foot.

"That's just when you hear shots," she said, adding that the suspect fell a few feet from his car, which was left running for hours after the shooting.

She said windows of cars in the parking lot were blown out by the gunfire. A fence and wall outside a home was also hit. She said officers tried to resuscitate Reinoehl.

"I was pulling up when it was all happening so I could have even been out here in the crossfire," Chatman said.

It's not known if Reinoehl fired at officers, according to Thurston County Sheriff's Lt. Ray Brady, who said four officers fired their weapons.

The suspect was shot trying to flee, according to a statement from the Thurston County Sheriff's Office, which does not identify Reinoehl by name.

Members of a violent offender task force led by US Marshals were conducting surveillance on an apartment when the suspect "came out of the apartment and got into a vehicle to leave," said the statement posted to Facebook Friday.

"During the attempt to apprehend him, shots were fired at the suspect in the vehicle and he fled from the vehicle on foot," said the statement, adding that the man was shot and pronounced dead at the scene.

"We can confirm at this time that the suspect was armed with a handgun," the statement said.

Reinoehl described himself as '100 percent anti-fascist'

In an interview broadcast Thursday night by Vice News, Michael Reinoehl, 48, appeared to take responsibility for the killing of Aaron "Jay" Danielson at the Portland protest, alleging that he acted in self-defense because he and a friend were about to be stabbed.

"You know, lots of lawyers suggest that I shouldn't even be saying anything, but I feel it's important that the world at least gets a little bit of what's really going on," Reinoehl said. "I had no choice. I mean, I had a choice. I could have sat there and watched them kill a friend of mine of color. But I wasn't going to do that."

In the interview, conducted with freelance journalist Donovan Farley, Reinoehl said he went downtown Saturday night to provide "security" after seeing a caravan of hundreds of Trump supporters parading in vehicles through the city. He described himself as "100 percent anti-fascist," though not a member of any Antifa group.

Danielson, who was a supporter of the far-right group Patriot Prayer, was shot in the chest during the confrontation and died.

After the shooting, Reinoehl said he realized what had happened and "was confident that I did not hit anyone innocent." He then left the scene feeling "totally justified [that] had I not acted I am confident that my friend, and I'm sure I, would have been killed."

Reinoehl said he had decided to speak out because "there's been a lot of propaganda put out there."

"What they've done is they've tried to make it look like we're all terrorists. And they're trying to make me look like a murderer," he said.

The interview was broadcast as officers moved to apprehend him in Lacey, Washington, according to a federal law enforcement source familiar with the incident.

President Trump, apparently reacting to the interview, tweeted moments after the broadcast: "Why aren't the Portland Police ARRESTING the cold blooded killer of Aaron "Jay" Danielson. Do your job, and do it fast. Everybody knows who this thug is. No wonder Portland is going to hell! @TheJusticeDept @FBI"

Reinoehl regularly posted photos and videos of protests on social media in June and early July, including one of people chanting "F**k Trump" as someone burned a Trump 2020 flag.

And in the months leading up to Saturday's fatal shooting of 39-year-old Danielson, Reinoehl had at least two run-ins with the law.

At a July 5 protest, Reinoehl was cited for possessing a loaded handgun in a public place, interfering with police, and resisting arrest. Police said they seized a Walther PPQ semi-automatic pistol as evidence. In a statement, the Multnomah County District Attorney's Office said the incident remains under investigation and that "we have neither rejected nor declined prosecution on this case."

A month earlier, Reinoehl and his son, 17, were arrested in Baker County, Oregon, just before 1 a.m., according to Oregon State Police records. The two were stopped by an Oregon state trooper and a county sheriff's deputy on June 8 for driving over 100 miles an hour in separate cars in Interstate 84, which runs east from Portland, the records state.

Reinoehl was charged with driving under the influence of a controlled substance, unlawful possession of a firearm (a loaded Glock pistol), driving while suspended, recklessly endangering another person (his daughter, who was a passenger in his car), and reckless driving. Reinoehl's son was arrested on DUI and a gun charge.

Suspect blamed the violence on people opposed to protests

On social media, meanwhile, Reinoehl posted comments that vacillated between rejecting violence and embracing the use of force. He called the months of protests against police violence in Portland a fight for his country and said, "now is the time to change the course of humanity."

Reinoehl described being involved in a prior clash with counter-protesters in a video interview with Bloomberg Quick Take News posted July 27, though the incident hasn't been verified by CNN.

In that video, he blamed the violence on people opposed to the protests, saying, "It's escalating to a point where, you know, they're trying to disrupt us in every way, that's illegal. They're shooting at us. They're sending people that are starting fights ... it's warfare, this is stuff they've done overseas for years and years and years and years; but now they're doing it to us."

Reinoehl described himself as having army experience -- though the US Army said it couldn't find records of his service -- and said he worked as a professional snowboarder and contractor. He said in the video that he was providing security to Black Lives Matter protesters.

In a photo in one of his own posts, Reinoehl pulled up his shirt to show what he called, "Tonight's battle scar thanks to an nasty bean bag shot at me from 20 feet away (sic)." When someone warned in a text message about a purportedly armed "Patriot" group expected to counterprotest on July 4, Reinoehl replied, "Thank you my friend we are ready."

"Every Revolution needs people that are willing and ready to fight," he said in a June 16 Instagram post, adding, "I am 100% ANTIFA all the way! I am willing to fight for my brothers and sisters. Even if some of them are too ignorant to realize what antifa truly stands for. We do not want violence but we will not run from it either!"

He also talked about confrontations with police, saying, "If the police continue to pick on and beat up innocent citizens that are peacefully voicing their objections, it must be met with equal force!" He said that "we truly have an opportunity right now to fix everything... it will be a fight like no other! It will be a war and like all wars there will be casualties."

Reinoehl had been estranged from his family, according to one family member, who said that Reinoehl had a "stick it to the man mentality." Family members became aware of the August 29 shooting after receiving a threatening text message Sunday, the relative said.

"We woke up to death threats, that's how we found out. We received messages all day yesterday. Some said 'blood for blood,' another said our whole family was in danger and that 'someone's gotta die.'" Among the texts was one to the family member's spouse with "a photo of me and the text, 'Patriot Prayer says hello,'" the family member said.

When they called the police to report the threats, they were asked to identify photos of Reinoehl, the family member added.