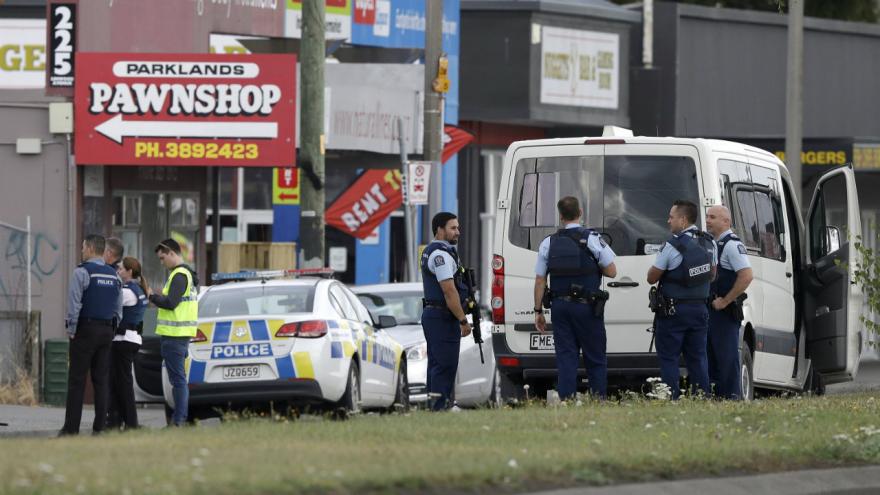 A murder suspect was to appear in a New Zealand court Saturday morning in connection with the mass shootings in which at least 49 people were killed at two mosques in the city of Christchurch, an unprecedented attack apparently broadcast live for a time on social media. Photo courtesy Mark Baker/AP

(CNN) -- Worshippers ran from gunfire, called police and hid beneath the benches of two mosques in New Zealand for 36 minutes before a group of armed officers located the gunman.

"There were two other firearms in the vehicle that the offender was in and it absolutely was his intention to continue with his attack," New Zealand Prime Minister Jacinda Ardern said.

At least 49 people were killed and dozens injured in an unprecedented attack that has shocked the nation and the world. The suspect, Brenton Harrison Tarrant, has been charged with one count of murder but officials have said additional charges are forthcoming. 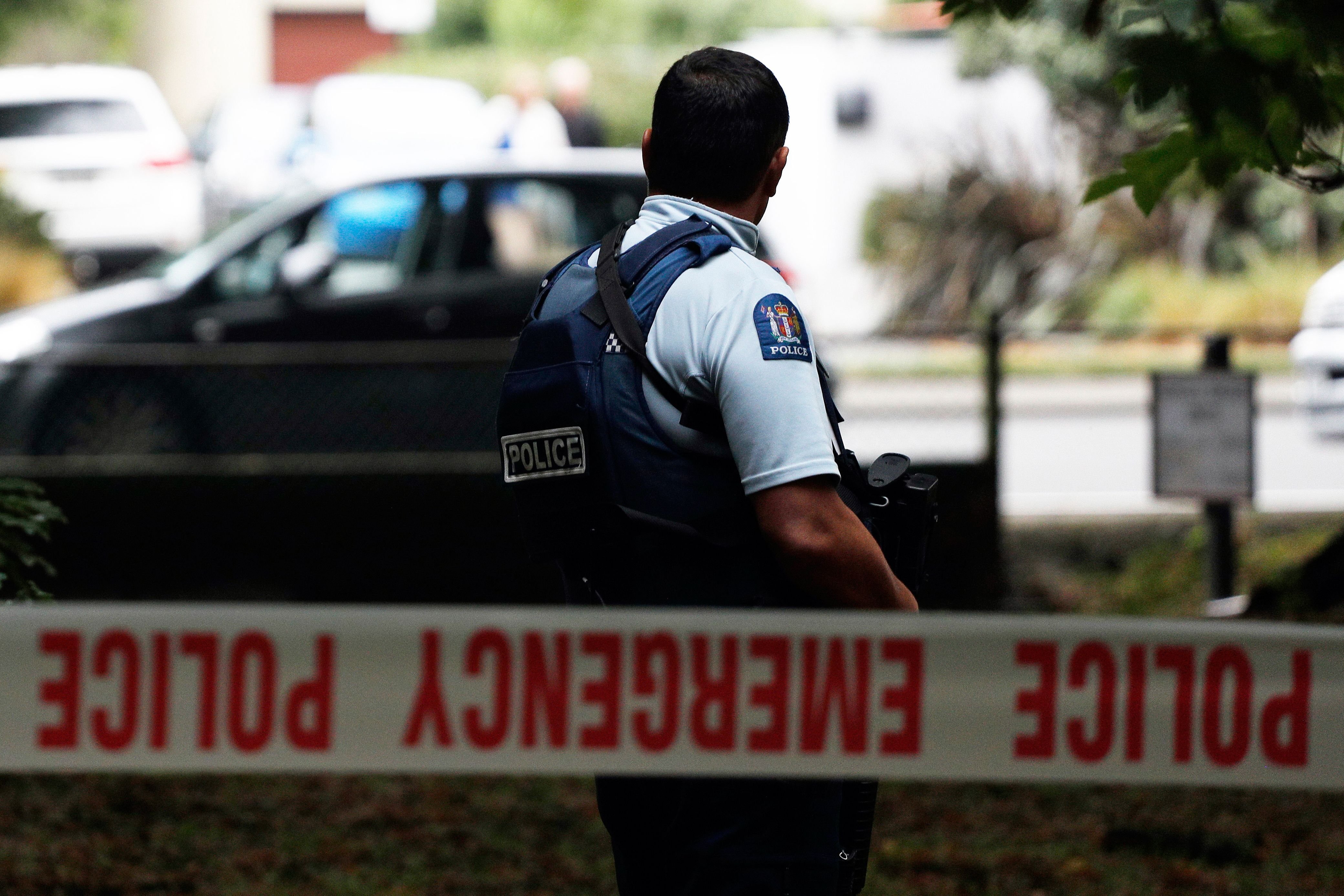 Nearly a day after the shootings, Tarrant, 28, appeared before a Christchurch district judge. He was handcuffed and was wearing a white prison jumpsuit when he quietly walked into the courtroom.

He was remanded in custody and is set to reappear in court April 5.

Authorities implemented more security measures. The courtroom was closed to the public, the name of the victim was withheld by authorities and a judge ruled that pictures of the suspect in court must have his face blurred.

The attack, which was apparently broadcast live for a time on social media, is the biggest massacre in New Zealand's history. Ardern labeled the carnage a terrorist attack and has vowed to change the country's gun laws as a result.

Police presence in Christchurch and around the country was heightened while families arrived to streets near the mosques with tributes for the victims.

"This attack has been an enormous shock for all New Zealanders, and I am aware that there is a real sense of fear and concern for personal safety, particularly among our Muslim communities," New Zealand police commissioner Mike Bush said.

In addition to the 49 killed, authorities said 48 people were wounded, many of them seriously. Some of the injured were young children with gunshot wounds.

The suspect, who is an Australian citizen, was living in the southern city of Dunedin at the time of the attack, Prime Minister Jacinda Ardern said. Dunedin is about 225 miles from Christchurch.

A police spokesperson in New South Wales said Tarrant's family in Australia have been "assisting and cooperating" with authorities.

Ardern said the suspect traveled around the world and was in New Zealand sporadically. He had no criminal history in New Zealand or Australia, and had not drawn the attention of the intelligence community for extremist views.

Tarrant was one of three people arrested in connection with the shootings. The other two remain in custody but their role in the shootings remains unclear. None of them had been on any security watch lists prior to the attack, officials said.

Police said they were not searching for any other suspects but stressed the investigation remained fluid.

When asked about whether the same person carried both shootings, Bush said officials were not aware of anything that would contradict that suggestion.

A fourth person who had been taken into custody was later determined to be an armed bystander who wanted to help police.

As Ardern revealed deatails about the suspect's weapons and his background, she promised changes to the country's gun laws.

The shooter, who had a gun license acquired in November 2017, carried out the killings with two semi-automatic weapons, two shotguns and a lever-action firearm, Ardern said.

"While work is being done as to the chain of events that lead to both the holding of this gun license and the possession of these weapons, I can tell you one thing right now -- our gun laws will change," Ardern told reporters on Saturday.

"It's the time for change," said Ardern, who had earlier called Friday one of her country's "darkest days" and described the suspects as holding "extremist views" that have no place in New Zealand or the world.

The Prime Minister was traveling from Wellington to Christchurch on Saturday alongside other politicians, including the opposition leader.

"As is the entire nation, we are all unified in grieving together," she told reporters.

Bush, the police commissioner, said authorities were investigating the suspects' ties to shootings that occurred as Muslims convened for Friday prayers, the busiest time for many mosques around the world.

The suspected shooter livestreamed video of the attack and posted a lengthy manifesto online under the name of Brenton Tarrant. In the manifesto, he identifies himself as a white man, born in Australia, and lists the white nationalists who have inspired him.

Ardern urged the public not to share the "distressing" 17-minute video.

Authorities declined to discuss potential motives for the attack. But the 87-page manifesto posted on social media just before the shooting began was filled with anti-immigrant, anti-Muslim screeds and explanations for an attack. It was not signed.

Police said they were aware of a video shared online and broadcast live during the attack, which apparently showed a gunman walking into a mosque and opening fire. "We would strongly urge that the (video) link not be shared. We are working to have any footage removed," New Zealand police said.

The brazen nature of the broadcast, and the apparent failure of tech companies to prevent its proliferation online, raised concerns. In New Zealand, commentators also worried that the horror would sow deep divisions in a society that has largely avoided the polarizations that have spread elsewhere.

Facebook New Zealand spokesperson Mia Garlick said in a statement that the footage was quickly taken down. "New Zealand Police alerted us to a video on Facebook shortly after the livestream commenced and we removed both the shooter's Facebook account and the video. We're also removing any praise or support for the crime and the shooter or shooters as soon as we're aware," she said.

CNN has not been able to independently confirm any information about the attackers or the the alleged video at this stage.

A spokesperson for Google and YouTube called the shooting a "terrible tragedy," adding in a statement: "Shocking, violent and graphic content has no place on our platforms, and is removed as soon as we become aware of it. As with any major tragedy, we will work cooperatively with the authorities."

Twitter removed an account it believed was linked to the main suspect and was working to keep the video of the incident off its platform, a spokesperson said. "We are deeply saddened by the shootings in Christchurch today," Twitter said in a statement. "Twitter has rigorous processes and a dedicated team in place for managing exigent and emergency situations such as this. We also cooperate with law enforcement to facilitate their investigations as required."

Australian Prime Minister Morrison said he asked for flags to be flown at half-staff out of respect for those killed. "Australians stand with all New Zealanders today during this dark time where hate and violence has stolen their peace and innocence. Kia kaha (stay strong)," Morrison tweeted earlier, using a Maori phrase.

US President Donald Trump said in a tweet: "My warmest sympathy and best wishes goes out to the people of New Zealand after the horrible massacre in the Mosques. 49 innocent people have so senselessly died, with so many more seriously injured. The U.S. stands by New Zealand for anything we can."

Armed officers were deployed after first receiving reports of the shootings at 1:40 p.m. local time, when mosques were packed for Friday prayers. Police said 41 people were killed at the al Noor mosque on Deans Avenue. Seven died at the Linwood mosque on Linwood Avenue, and one died in the hospital from injuries.

Two improvised explosive devices were found in a vehicle connected to the attack. A number of weapons were also recovered at both locations.

The area was placed on lockdown, and police urged Christchurch residents to stay indoors and monitor the police website and social media. Worshipers were urged to stay away from all mosques in New Zealand.

Later in the day, authorities evacuated properties close to a "location of interest" in Dunedin.

Much remains unknown about the victims, but they appear to have hailed from around the world. Speaking to reporters, Ardern said some of "those involved" were from Pakistan, Turkey, Saudi Arabia, Bangladesh, Indonesia and Malaysia.

At least two Jordanian citizens were killed and five others wounded in the shootings, according to a statement from Jordan's Foreign Ministry on Friday.

A 5-year-old girl was critically wounded and had surgery but remained in serious condition, her uncle, Sabri al-Daraghmeh, told Jordan's al-Mamlaka TV. She was shot in the face, the abdomen and the leg.

Al-Daraghmeh told the station that his brother was also wounded and remained in stable condition. He was shot in the abdomen and the leg.

Five other Pakistanis citizens were still unaccounted for, he said.

One worshiper, Mohan Ibn Ibrahim, said he was inside one of the mosques when the shooting began. He said he heard the gunman "continuously shooting for 10 to 15 minutes."

"It's a big mosque and there were more than 200 people inside. The gunmen came from the back side. Gunshots went on for a long time. We had to jump the wall to escape. I saw lots of broken glass and bricks on the backside of the mosque," he said.

"I came to the street, I saw one person got shot on his chest," he said, adding that the ambulance and police then arrived on the scene. He said that he had a friend in another mosque in the area who told him a gunman had opened fire there as well and five people were dead.

"I could not contact two of my friends who are in the mosque as well," he said.

Another witness, who did not want to be named, said he was driving and saw a man with a "with his 3- or 4-year-old daughter" who had been shot in the back. "He was screaming, like, get her to the hospital," he said. "I just got my truck and loaded up him, and his daughter, and this other guy had been shot in the leg, and took them to the hospital," he said.

One man outside the mosque said that he prayed that the gunman would "run out of bullets."

"I was thinking that he must run out bullets you know, so what I did was basically waiting and praying to God, oh God please let this guy run out of bullets," he said. He said a man told him to remain still and then the gunman shot the man "straight in the chest."