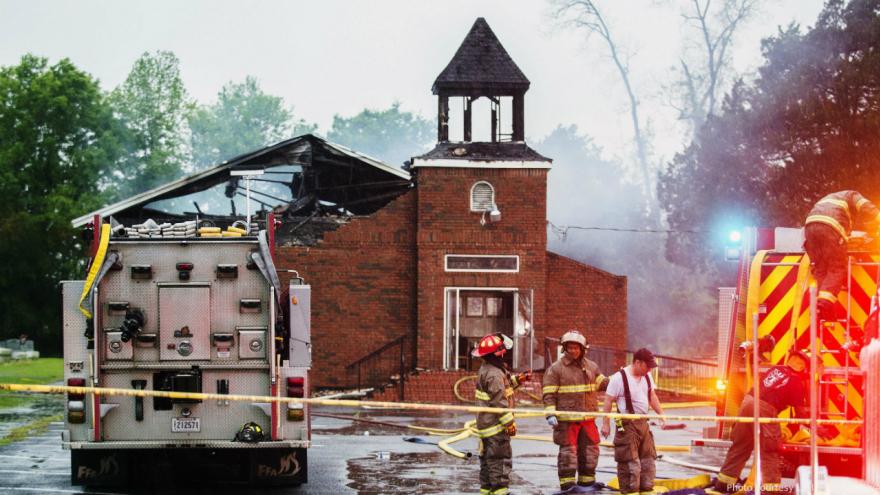 (CNN) -- For three historically black churches in the heart of south central Louisiana's Cajun and Creole country, Sunday services will not be the same.

The churches in rural St. Landry Parish -- about 30 miles north of Lafayette -- have burned since March 26 in what officials have described as "suspicious circumstances."

"There is clearly something happening in this community," State Fire Marshal H. Browning said in a statement.

Standing outside the charred remains of the Greater Union Baptist Church in Opelousas -- which burned on Tuesday -- Pastor Harry Richard said he looked forward to meeting elsewhere with his congregation on Sunday.

"Quite naturally, something like this would shake us up," he told CNN affiliate KLFY.

Why are black church fires associated with acts of hate?

"I'm very concerned but I'm very optimistic because of our faith in God and, no matter what happens, I feel like this is his plan," Richard said. "He's going to bring me through this."

"The three fires in St. Landry Parish contain suspicious elements, but we have not yet classified them," said Ashley Rodrigue, a spokeswoman for the state fire marshal.

Gov. John Bel Edwards this week appealed for the public's help with the investigations.

"Our churches are sacred, central parts of our communities and everyone should feel safe in their place of worship, " he said in a statement. "We do not know the cause of these fires in St. Landry and Caddo parishes, but my heart goes out to each of the congregations and all of those who call these churches home."

"Investigating a fire is a very lengthy process," he said. "It's one of the most complicated and unconventional crime scenes you'll ever enter because most of the evidence is burned away."

The FBI and federal Bureau of Alcohol, Tobacco, Firearms and Explosives were assisting in the investigations.

"It's imperative that the citizens of this community be part of our effort to figure out what it is," Browning said.

St. Landry Parish Sheriff Bobby Guidroz said authorities were "doing everything we can" to protect churches and determine the cause of the fires. Law enforcement presence at houses of worship has increased.

"You got to have a certain degree of anger because there's no reason for this," Deacon Earnest Hines of Mount Pleasant Baptist Church in Opelousas told CNN affiliate WBRZ.

"You know the history of our country. During the civil rights struggle, they had all these incidents that would happen and sometimes that happens again," he said.

"Our parents, grandparents went here," he said. "Buried in the back there, some of them are."

On Sunday, he told KLFY, he planned to preach about God's grace to his displaced congregation.

"God's grace is undeserved merit. I know we don't deserve this, but he gives us something better than this, and that's undeserved grace," Richard said.