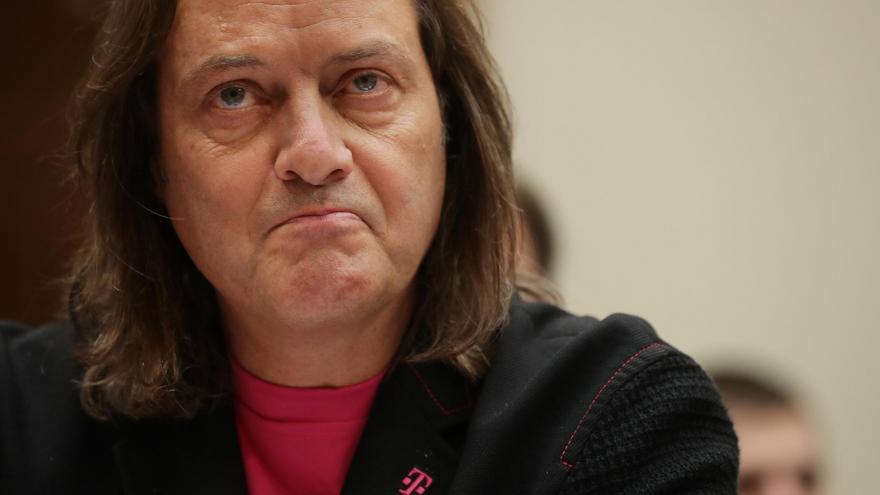 (CNN) -- T-Mobile announced Monday that CEO John Legere will be stepping down at the end of next April after his contract expires.

The surprise move comes as speculation swirls about the possibility that Legere was a leading contender to become the next CEO of WeWork — although Legere shot down reports that he was looking to take that job.

Legere will be replaced by Mike Sievert, who is currently the president and chief operating officer of T-Mobile. The company said Legere is going to remain a board member and will assist with the company's pending acquisition of rival Sprint.

Sprint is controlled by Japanese investing giant SoftBank, which also has a controlling interest in WeWork.

WeWork is looking for a new CEO after Adam Neumann was forced out when the company was forced to scrap its initial public offering plans due to concerns about its corporate governance and mounting losses.

But Legere said during a conference call with analysts Monday that he never was having discussions with WeWork, adding that rumors about him leaving made things "awkward" since he was already in the process of hashing out a T-Mobile succession plan.

Investors took the news of Legere's stepping down in stride. Shares of T-Mobile were down only slightly Monday while Sprint's stock rose nearly 1%.

T-Mobile not worried about states' legal challenge to Sprint deal

Legere said that in his last few months as CEO, he plans to focus on making sure the deal with Sprint is finalized. The merger has been given regulatory approval by the US Federal Communications Commission and Department of Justice. But a group of attorneys general from several states are still trying to block the merger. A trial is set to begin in December.

Sievert said during the conference call that he was not too worried about the possibility that the Sprint deal will unravel.

"We're planning to win, as you know and we're increasingly confident as we get closer to the trial," he said, adding that T-Mobile's main focus "is on getting this deal done and building this new company, unlocking this massive capacity on the network and the massive synergies that follow from that capacity expansion."

The $26 billion deal with Sprint with create a much more formidable rival to telecom giants Verizon and CNN owner AT&T as well as cable firms Comcast and Charter Communications.

Legere, who is often seen wearing a magenta-colored T-Mobile t-shirt, often pokes fun at these larger rivals -- and he said Monday that would not change.

"This transition is more than 5 months away, so you will still have plenty of time and opportunity to hear me take shots at the competition," he said during the call. "So don't get too excited, AT&T, Verizon, Comcast and Charter."

During the call, Sievert pledged to continue referring to a combined T-Mobile and Sprint as the "un-carrier" -- a term Legere coined to describe what he believed to be T-Mobile's more customer-friendly style of doing business.

"Our lower cost and greater scale will allow us quite simply to supercharge the un-carrier strategy and bring even more competition to this market," Sievert said, adding that AT&T and Verizon "will have no idea what's about to hit them and customers are going to be the winners."

But Legere did have some kind words for Verizon, which is partnering with Disney to offer the House of Mouse's new Disney+ streaming service free to many Verizon cell phone and Fios internet and TV subscribers.

"Disney+ looks like it's been a big success out of the gate. And there's some great assets in there," Legere said.

But in true Legere style, he quickly dubbed Verizon's partnership to be a copycat move to the deal that T-Mobile has with Netflix that allows T-Mobile subscribers to get Netflix for free.

"I think Disney+ is an exciting platform. I'm not denigrating it, but Verizon's offers certainly pales in comparison of what T-Mobile offers," Legere said, adding that T-Mobile may consider other partnerships but did not have any plans to create its own content like AT&T, Verizon and Comcast do.

"We don't fashion ourselves a media company," Legere said.