Taiwan's coronavirus response is among the best globally 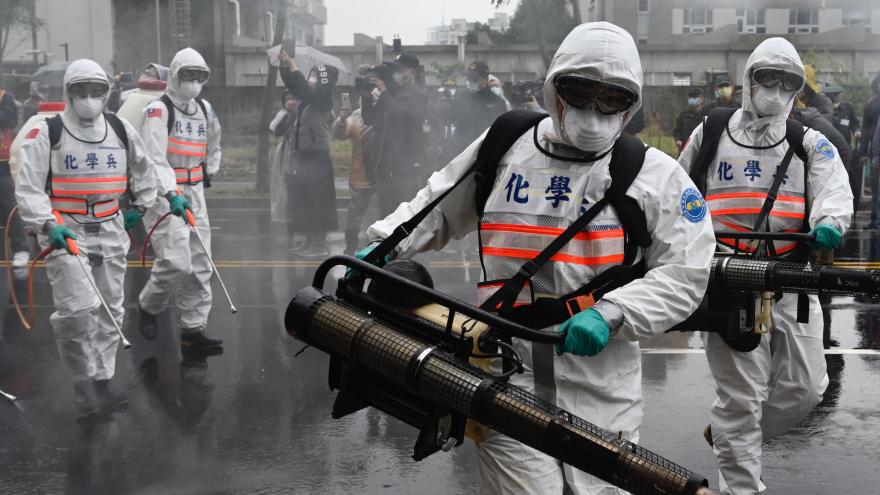 (CNN) -- On January 25, as the world was still waking up to the potential danger of the novel coronavirus spreading rapidly out of central China, two governments recorded four new infections within their territory.

Australia and Taiwan have similar sized populations of about 24 million people, both are islands, allowing strict controls over who crosses their borders, and both have strong trade and transport links with mainland China. Ten weeks on from that date, however, Australia has almost 5,000 confirmed cases, while Taiwan has less than 400.

The question is not what Australia did wrong -- 20 countries have more cases than Australia, and seven have more than 10 times as many -- but how Taiwan has kept the virus under control when other parts of the world have not.

During the severe acute respiratory syndrome (SARS) outbreak of 2003, Taiwan was among the worst-hit territories, along with Hong Kong and southern China. More than 150,000 people were quarantined on the island -- 180 kilometers (110 miles) off China's southeastern coast -- and 181 people died.

While SARS now pales in comparison to the current crisis, it sent shockwaves through much of Asia and cast a long shadow over how people responded to future outbreaks. This helped many parts of the region react faster to the current coronavirus outbreak and take the danger more seriously than in other parts of the world, both at a governmental and societal level, with border controls and the wearing of face masks quickly becoming routine as early as January in many areas.

Taiwan has a world-class health care system, with universal coverage. As news of the coronavirus began to emerge from Wuhan in the run up to the Lunar New Year, officials at Taiwan's National Health Command Center (NHCC) -- set up in the wake of SARS -- moved quickly to respond to the potential threat, according to a recent report in the Journal of the American Medical Association (JAMA).

"Taiwan rapidly produced and implemented a list of at least 124 action items in the past five weeks to protect public health," report co-author Jason Wang, a Taiwanese doctor and associate professor of pediatrics at Stanford Medicine, said in a statement. "The policies and actions go beyond border control because they recognized that that wasn't enough."

This was while other countries were still debating whether to take action. In a study conducted in January, Johns Hopkins University said Taiwan was one of the most at-risk areas outside of mainland China -- owing to its close proximity, ties and transport links.

Among those early decisive measures was the decision to ban travel from many parts of China, stop cruise ships docking at the island's ports, and introduce strict punishments for anyone found breaching home quarantine orders.

In addition, Taiwanese officials also moved to ramp up domestic face-mask production to ensure the local supply, rolled out islandwide testing for coronavirus -- including retesting people who had previously unexplained pneumonia -- and announced new punishments for spreading disinformation about the virus.

"Given the continual spread of Covid-19 around the world, understanding the action items that were implemented quickly in Taiwan, and the effectiveness of these actions in preventing a large-scale epidemic, may be instructive for other countries," Wang and his co-authors wrote.

"Taiwan's government learned from its 2003 SARS experience and established a public health response mechanism for enabling rapid actions for the next crisis. Well-trained and experienced teams of officials were quick to recognize the crisis and activated emergency management structures to address the emerging outbreak."

In particular, Taiwan's rapid and transparent response -- with medical officials holding daily briefings on the matter -- has been held up as an example of how democracies can still rein in epidemics, even as some were claiming only an autocratic government like China's could effectively control such a rapidly spreading virus. Taiwan also avoided the type of strict lockdowns that characterized the response in China and many other countries.

Taiwan is in such a strong position now that, after weeks of banning the export of face masks to ensure the domestic supply, the government said Wednesday that it would donate 10 million masks to the United States, Italy, Spain and nine other European countries, as well as smaller nations who have diplomatic ties with the island.

Taiwan's relative success in stymying the coronavirus outbreak has largely been overshadowed by the worsening crisis in Europe and the US, and the sense that, if any lessons were there to be learned, the moment has passed.

While that may be true, why Western countries did not follow Taiwan's lead in January and February when they still had a chance remains unclear. One contributing potential factor many observers have pointed to is that Taiwan, unlike most every other governments, is not a member of the World Health Organization (WHO).

Taiwan is claimed by China as part of its territory, and Beijing blocks Taiwan from participating in many international organizations unless it does so in a way that conforms to the "one China" principle -- which obfuscates the island's separation from mainland China -- such as calling itself "Chinese Taipei" in the Olympics.

Taiwan did have observer status at the WHO until 2016. That changed, however, with the election of President Tsai Ing-wen, of the traditionally pro-independence Democratic Progressive Party,which has been followed by Beijing massively ramping up pressure on Taipei, poaching its few remaining diplomatic allies and staging military shows of force.

The WHO argues that Taiwan's exclusion from meetings of member states does not have an effect on the day-to-day sharing of health information and guidance, with experts and health workers still interacting with international colleagues through the organization. However, numerous observers, including Taiwanese officials, have claimed that it has had a negative effect both during the SARS epidemic and the current crisis.

Natasha Kassam, an expert on China, Taiwan and diplomacy at Australia's Lowy Institute, said that early on in the coronavirus pandemic, a lack of direct and timely channels to the WHO "resulted in inaccurate reporting of cases in Taiwan," with WHO officials apparently relying on Beijing for numbers from the island.

"Taiwanese authorities have complained about the lack of access to WHO data and assistance," she said.

That lack of information may have forced Taiwan to go it alone and make decisions early on independently of the WHO guidance and broader international consensus.

Assistance goes in both directions, however, and in recent weeks, Taiwanese officials have repeatedly complained that their exclusion from the WHO is preventing the island playing its full part in the global response.

"We want to help -- to send out our great doctors, our great researchers, our great nurses -- and to share our knowledge and experience with countries that need it," Vice President Chen Chien-jen, a Johns Hopkins-trained epidemiologist, told the American Chamber of Commerce in Taipei last week. "We want to be a good global citizen and make our contribution, but right now we are unable to."

Officials on the island have seized on an interview with WHO assistant director-general Bruce Aylward by Hong Kong public broadcaster RTHK last week, in which he appeared to dodge a question on Taiwan, blaming internet connection issues.

In a statement, the WHO said that "the question of Taiwanese membership in WHO is up to WHO Member States, not WHO staff."

Speaking to reporters Friday, Chinese Foreign Ministry spokeswoman Hua Chunying, said that all sides clearly understand "that WHO members have to be sovereign states."

"There have been no issues with Taiwan's participation in relevant WHO events and its obtaining information on public health emergencies, including this pandemic," she claimed, contradicting the island's own government. "We hope (the US and Taiwan) stop their attempt in engaging in political manipulation under the pretext of the pandemic."

A spokesman for the WHO told CNN that "some people are confusing WHO's technical global public health mandate, with the mandate of countries to determine WHO's membership."

"Every year, WHO and Taiwanese authorities and experts interact on vital public health and scientific issues, according to well-established arrangements. During the current Covid-19 pandemic, there are regular interactions as well," they said in an email. "The Taiwanese caseload is low relative to population. We continue to follow developments closely. WHO is taking lessons learned from all areas, including Taiwanese health authorities."