Talks with GM 'have taken a turn for the worse,' union says 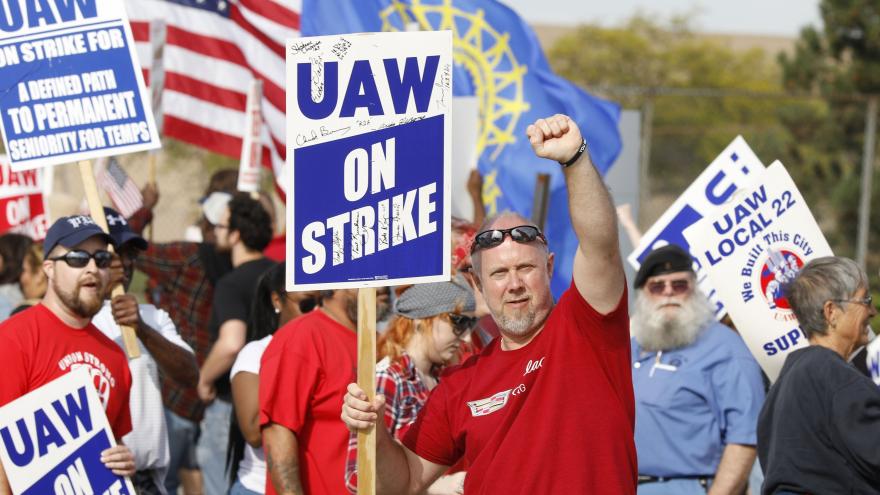 (CNN) -- Talks between the United Auto Workers union and General Motors "have taken a turn for the worse," according to the union's chief negotiator, suggesting that no immediate end is in sight for the auto industry's longest strike in decades.

The setback in talks followed several days of reported progress between the two sides. They hope to reach a new four-year deal.

Terry Dittes, the vice president of the United Auto Workers union negotiating team, sent a letter to members midday Sunday saying that the union found the company's latest contract proposal to be totally unacceptable to the union.

"They reverted back to their last rejected proposal and made little change," said Dittes' letter. He said the union negotiators "could not be more disappointed" in GM's position.

With nearly 50,000 GM employees on strike, this is the largest work stoppage at any US business since the last time autoworkers struck GM in 2007. But that strike was over in less than three days. This strike is now in its 21st day.

"We continue to negotiate in good faith with very good proposals that benefit employees today and builds a stronger future for all of us," GM said in a statement. "We are committed to continuing discussions around the clock to reach a resolution."

Despite the setback, the two sides are continuing to talk Sunday according to the UAW.

Major issues in these talks include GM's use of temporary workers, as well as the union's demand that the company find work for some or all of the four plants it announced it would to close. GM has already halted work at an assembly line in Lordstown, Ohio, as well as transmission plants in Warren, Michigan, and Baltimore. It also plans to halt work at the Hamtramck assembly plant in Detroit early next year.

The union wants GM to bring some production in Mexico to the United States. But a source familiar with the negotiations says bringing back a product lines from Mexico still has not been addressed in the talks. That particular issue was tabled to make progress in other areas, but the product line issue has popped up again, the source added.

The four US plants had about 3,000 UAW members on payroll at the time of the closing announcement. GM said it has found other jobs for 2,300 of those workers, but many had to relocate to take those other jobs.

GM said it had offered $7 billion in investment in US plants to create or save 5,400 jobs. as well as "solutions" for Lordstown and Hamtramck. But the union found those proposals unacceptable. Dittes' letter said GM's proposal did nothing to provide the job security guarantees the union is demanding.

Additional issues include wages and benefits and profit sharing.

"The company has shown an unwillingness to fairly compensate the great workforce of the UAW," said Dittes' letter.

The two sides had met every day since the strike started at 12:01 a.m. on Monday, September 16. The strike had halted work at 31 GM factories and 21 other facilities spread across nine states, mostly in the center of the country. It also led to layoffs at many of the 10,000 American suppliers that provide auto parts and other goods and services to GM. That may have furloughed as many as 200,000 additional workers at those companies, according to estimates. GM has had to halt work at some of its other plants in Canada and Mexico due to the strike, idling nearly 10,000 additional GM workers who are not part of the UAW.

The strike has been costly for both sides. Those on the picket lines had been getting only $250 a week in strike benefits, starting with the second week of the walkout. That's far below the more than $30 an hour that most of the veteran workers had been earning. Altogether that comes to lost wages of about $18 million a day for the striking GM employees, according to an estimate from Anderson Economic Group, a Michigan research firm concentrating on the auto industry. The strike has cost GM about $600 million in total lost profits through three weeks of the strike, according to Anderson.

But GM had built up the inventory of cars it had available before the strike to limit lost sales. Still, credit rating agency Moody's had estimated that once the strike went more than one or two weeks, the chances of it having a material impact on its finances had increased. GM's credit rating is only one step above junk bond status and any downgrade into junk bond status would risk raising GM's cost of borrowing.

GM and other automakers are dealing with declining US car sales along with the need to spend billions of dollars to develop electric and self-driving vehicles that GM believes represent the future for the industry. GM has said much of the $6 billion a year it hopes to save from plant closings would be invested in those research and development efforts.

But GM has remained very profitable, even in the face of declining sales in both the United States and China, now its largest market for car sales. The union has said its members made sacrifices to save the company 10 years ago as it went through bankruptcy and a bailout. The union argues that the record profits GM has reported mean the workers deserve to be compensated for those sacrifices.

Union contracts with Fiat Chrysler and Ford had been extended while the union tried to reach a deal with GM.