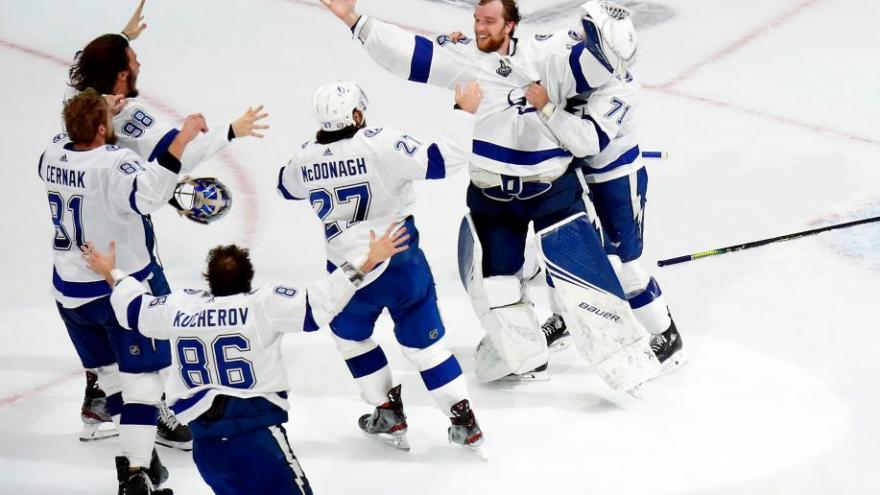 The Tampa Bay Lightning celebrate following the series-winning 2-0 victory over the Dallas Stars in Game Six of the 2020 NHL Stanley Cup Final at Rogers Place on September 28, 2020 in Edmonton, Alberta, Canada.

(CNN) -- The Tampa Bay Lightning defeated the Dallas Stars in Game 6 of the Stanley Cup Final to win the National Hockey League's 2019-2020 championship.

The Lightning won by a score of 2-0 in an empty Rogers Place arena in Edmonton, Alberta, Canada.

Brayden Point and Blake Coleman each scored for Tampa Bay, and Lightning goaltender Andrei Vasilevskiy held the Stars scoreless in a stellar performance.

Lightning defenseman Victor Hedman, who scored 10 goals in the postseason, was awarded the Conn Smythe Trophy as the most valuable player throughout the playoffs.

This is the Lightning's second Stanley Cup win in franchise history with the first coming in the 2003-2004 season.

In a surreal scene that sports fans may see play out again in future sporting championships, the Lightning team reveled and hoisted the Stanley Cup trophy with no fans to cheer them on in a relatively quiet celebration.

The NHL is the first of North America's four major sports leagues to complete a season since the pandemic disrupted the sports world. MLB begins its postseason Tuesday, and the NBA Finals is set to start Wednesday.