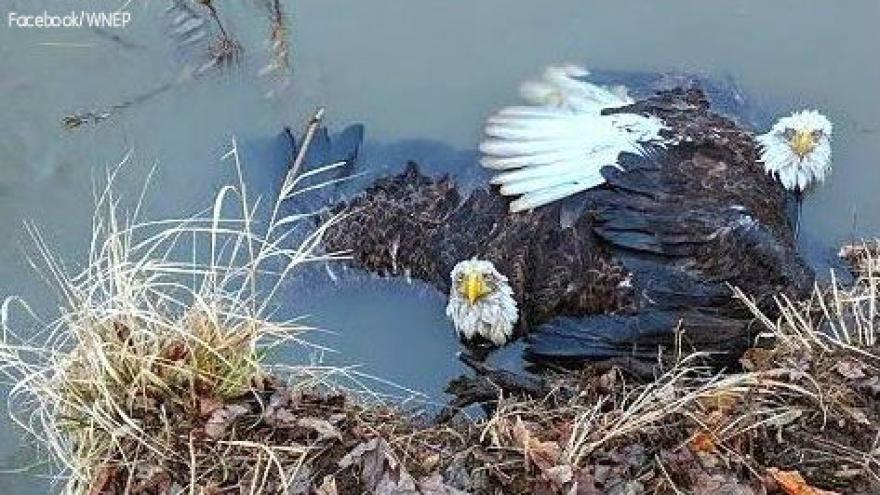 SCOTT TOWNSHIP, PA (WNEP) -- Birds of a feather may flock together but two eagles got a little too close in Columbia County.

The birds ended up getting tangled up for hours before being freed.

It was quite the ordeal for the two eagles, seen being released in a video sent to us by the Epsy Fire Company near Bloomsburg.

This happened on Sunday evening. Hours before, that eagle and another were found tangled together in the Susquehanna River, Rebecca Weaver took a photo.

"I never imagined to see a situation like that. We have seen eagles on the property landing on the trees but never in that situation," said Weaver.

Weaver says her daughter Alyssa, age 11, first heard a noise by the river. The family went out to check it out and discovered two eagles, stuck together, floating in the river.

"A little crazy you got so many things going through your head. You aren't sure what direction you need to go but getting help was the first thing that needed to happen," Weaver said.

"Their talons were just so stuck from the cold they couldn't release," Game Warden Rick Deitrich. "It was like lifting up two by fours, and basically what it was, so we just used snare poles to get the eagles out and they actually started shivering."

The Game Commission thinks they were fighting, got their talons tangled, then fell in the water.

The tangled-up eagles were transported to Epsy Fire Company where they were able to warm up and fly away.

"Our family is very much avid in the outdoors so when you see an animal it's kind of instinct you do not want to see them suffer," Weaver said.

Weaver added she hoped to see the birds one day flying over the Susquehanna River instead of being tangled up in the water.