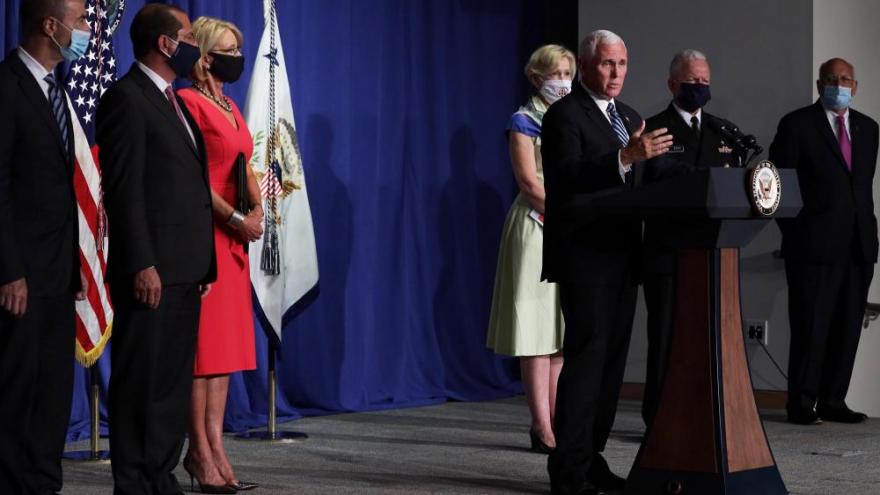 (CNN) -- The White House coronavirus task force has again ramped up its warnings to states in a weekly set of reports as the pandemic continues to aggressively worsen, raising alarms on the potential impact of rising cases on hospitals.

"There is now aggressive, unrelenting, expanding broad community spread across the country, reaching most counties, without evidence of improvement but rather, further deterioration. Current mitigation efforts are inadequate and must be increased to flatten the curve to sustain the health system for both Covid and non-Covid emergencies," state reports dated November 15 obtained by CNN said.

The language in the weekly reports, which offer the administration's most unvarnished picture of the pandemic, has become increasingly dire in recent weeks, matching the severity of the current situation as President Donald Trump remains silent on rising cases, focusing instead on positive vaccine developments in his only public event on the matter in a month last Friday.

Reports shared with states over the summer months called for social distancing and face coverings, implementing contact tracing and closing bars and nightclubs in "red zone" states. In mid-September, reports reflected improvements in new case rates and test positivity. Reports in late October warned of "unrelenting, broad community spread in the Midwest, Upper Midwest, and West." By early November, reports said, "There is a continued increase in cases, hospitalizations, and fatalities nationally, spreading southward from the coldest climates as the population moves indoors and cases increase exponentially." And last week's reports suggested there was "accelerating community spread across the top half of the country" and "significant deterioration in the Sunbelt."

That language was also reflected in charts included with the reports mapping spread of new cases per 100,000 population across the US over the past several months, with isolated spread across the country six months ago, followed by worsening in the Southeast in July, worsening in the Midwest in October, and now, the entire nation essentially engulfed in the most recent chart.

This week's reports also included a comparison to Europe, which is also experiencing, per the task force, "a fall surge similar to the USA."

Europe, however, is "showing early signs of improvement," the reports said, citing mask requirements in public settings, with most European countries imposing fines for non-compliance, as well as "significant restrictions on gathering size."

Tailored language in each state's report this week also intensified from previous weeks.

For instance, in New Mexico, the breadth and depth of community spread "is now threatening the health system," the task force said, calling for "significant behavioral change."

"The doubling of hospitalizations in the past 4 weeks is deeply concerning and not sustainable," New Mexico's report said.

In Wyoming, where there is "deeply concerning" acceleration in cases, the task force recommended "more intensive restrictions, such as temporary closures of bars and restaurants."

There is still no statewide mask mandate in Wyoming, to which the task force said, "The issuance of a statewide recommendation for facial covering communicates urgency. This is strongly advised."

In Tennessee, spread is "deepening and unyielding," noting that increases in hospitalizations and deaths "correlate with Halloween and related activities."

In Arkansas, the task force said it shares the "strong concern of Arkansas leaders that the current situation is worsening."

"Arkansas is on the precipice of a rapid, accelerating increase in cases which will be followed with new hospital admissions," the Arkansas report said, calling for compliance with public health orders, including mask usage.

In Maine, there is "continued acceleration of the epidemic," which, the task force said, warrants "increasing restrictions" including the recommendation that the state considers ways to enforce social distancing.

In Ohio, there has been a "full resurgence" in new cases with "an extremely rapid rise in hospitalizations in over 40 and over 70 year-old," the report said

In Maryland, the task force warns of an "accelerating surge in cases," with its highest daily number of new cases during the pandemic reported last week.

And in Wisconsin, there has been an "unrelenting rise" over two months and the "current situation is critical."

Recommendations to each state also include suggestions for expanding proactive testing and contact tracing.

And as public health officials express concerns about small group gatherings with the Thanksgiving holiday next week, the task force warned states that the "upcoming holidays can amplify transmission considerably," calling for increased public health messaging.

"On university campuses, students are letting their guards down with Thanksgiving break less than a week away. Message to students to continue their mitigation actions on and off campus to protect others and themselves. If they are going home, they should follow CDC holiday guidelines for protective behaviors," the reports said.