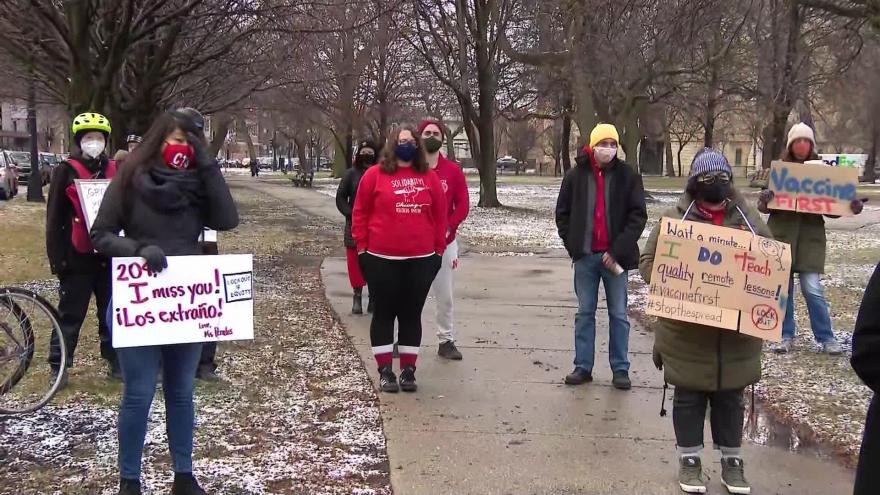 (CNN) -- Lori Torres knows the dangers of coronavirus are real.

Fourteen members of her extended family tested positive after they grieved together for the loss of her grandmother last November.

So Torres feels safer at home -- and that's where she plans to keep herself and her three children.

As a Spanish teacher at James Monroe Elementary School in Chicago, she has hundreds of other children also relying on her. But in the pandemic, she's made her choice to put family first.

"I need to worry about not just what my students are facing, but also what my family and myself are facing," she told CNN. "I think it's OK that, at a time like this, that I take a step back and consider me at this point."

Torres has a powerful ally in her corner: the Chicago Teachers Union (CTU). And the union has a powerful weapon at its disposal: The ability to strike.

Chicago Public Schools (CPS) CEO Dr. Janice Jackson said the district has plans to mitigate the spread of any coronavirus outbreaks in schools. She and other school officials believe it's time to get everyone back to the classroom.

More than 70,000 K-8th grade students -- about 37% of eligible students -- have indicated to the school district they intend to return on February 1.

The CTU has told its members to be prepared to go on strike if the school district retaliates for teachers choosing to continue teaching online -- yet neither the retaliation nor strike have happened.

Chicago Mayor Lori Lightfoot said in a recent news conference that she's "deeply disappointed" that 10 months into the pandemic, with plans made and work done, there is still no agreement between CPS and CTU -- especially as city officials have pointed to the educational divide as more than just a Covid mitigation issue.

Jackson said the vast majority of students whose grades are falling and being impacted dramatically by Covid-19 are Black and Latino students.

"If people don't see that as an equity issue, I really don't know what else to say," Jackson said.

"My first reaction was simply 'how inhumane,'" she said. "I'm comfortable being at home. It's safer at home. It may not be true for everyone. And we understand that, but the reality is it's too soon. If it comes to it, I am prepared to strike."

Some parents torn on whether to send kids back to school

Many parents know that much of the load usually alleviated by in-person school is also falling on them.

Steven Keys, a father of a 2nd grader and 7th grader, put it simply: "Every day, it's like a different test."

His wife Reella Garcia listed off the multiple roles she now has to fulfill for her children in virtual learning -- teacher, mom, lunch cook and more.

Still, the couple has concerns about sending their children back to school.

"We're not fully comfortable with it -- hearing that it's possibly a new strand of Covid that's supposedly could hit us," Garcia said. "And just knowing that my kids would have to sit there all this time with a mask on."

As a two-parent household, they know they have options.

"We want to make sure that we're not just, you know, expediting our children and putting them in a situation where we just want them out the house," Keys said.

"We do get it, that this social aspect is vitally important. I don't believe you can substitute the virtual experience for the in-person, but we know why we're in the predicament we are in, because of Covid-19."

That's one of the Chicago Teachers Union's arguments: if many parents are choosing not to send their children back, why should teachers be forced into classrooms?

"There are many options that we've proposed to staff classrooms where children are returning without putting every single member of the school community at increased risk — including thousands of educators with families at heightened risk from COVID."

Torres said she believes there should be vaccinations for teachers, and guarantees that school ventilation systems are good enough, especially on older campuses.

Her union has a similar demand.

"The Union is seeking a health metric based on CDC guidance, a phased reopening, access to vaccinations for educators, and enforceable safety standards in school buildings, which have struggled to meet even basic needs for PPE, adequate ventilation and clean facilities," the CTU said in a statement on Tuesday.

The US Centers for Disease Control and Prevention recommends that teachers get vaccinations -- along with firefighters, grocery store clerks and other essential workers -- ahead of the general population.

Teachers have been early in line to get shots in places like California, but for some teachers' unions that is still not enough.

There are arguments going on in Fairfax County, Virginia, where CNN affiliate WJLA reports teachers are getting their vaccinations but now calling for full in-person learning to be delayed until students get their vaccinations. The current vaccines have not been tested on children.

In states like Georgia, teachers are not backed by unions and some districts have required them to be back for in-person learning. Deaths of teachers from coronavirus, such as two educators who died within hours of each other in Cobb County, are adding to anxiety. Teachers there want the opportunity of virtual learning, with one leader telling CNN they felt lives were being put at risk, but strikes are not an option.

This week, newly published findings by CDC researchers showed that with the right precautions, schools can reopen safely.

The experts noted that the kind of spread seen in crowded offices and long-term care facilities has not been reported in schools. And while in-school transmission has occurred, they said there is little evidence that it contributed meaningfully to increased community transmission.

In Chicago, the CTU said that as of Tuesday, "a majority of Chicago's public schools fall outside of the newly released Center for Disease Control guidelines."

Still, Rosario Anacleto, a parent in Chicago, said her family is ready for schools to open.

"I'm that parent that's constantly like 'Put your mask over your nose. Do not touch this, do not touch that,'" she told CNN. "I believe I've implemented that into their brains enough and, with the school's help in watching and everything that is pretty much now our new normal, that they're going to do OK."

"I just really want to see my friends," Santiago said. "When we're on the computer I go to talk to them and I get headaches sometimes and my eyes start to hurt."