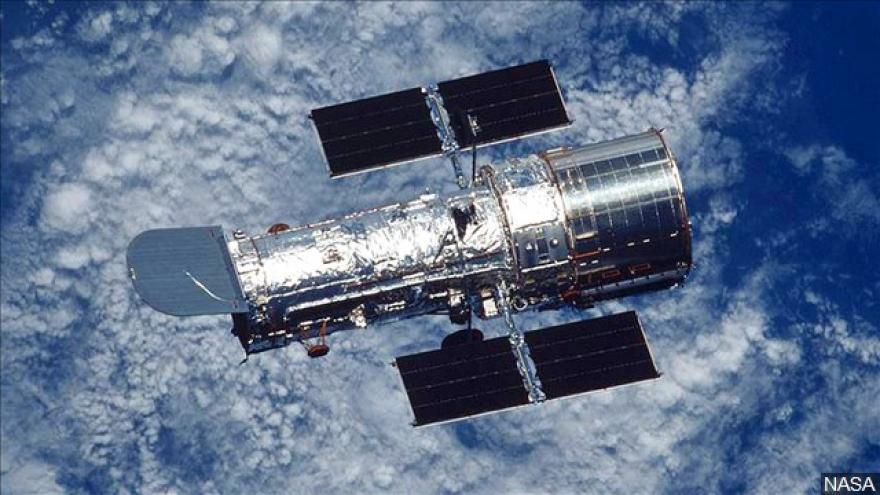 The Hubble Space Telescope, which travels the Earth at about five miles per second -- equivalent to driving from America\'s East to West Coast in just 10 minutes -- faces out to space to take pictures of planets, stars and galaxies to help scientists learn about the solar system. NASA scientists have been trying to repair the telescope since Friday. Photo courtesy NASA

(CNN) -- NASA scientists are trying to repair the Hubble Space Telescope, which has been placed in "safe mode" since Friday after one of the three gyroscopes used to aim and steady the telescope failed.

The telescope, which travels the Earth at about five miles per second -- equivalent to driving from America's East to West Coast in just 10 minutes -- faces out to space to take pictures of planets, stars and galaxies to help scientists learn about the solar system.

"Science operations with Hubble have been suspended while NASA investigates the anomaly," a statement from the space agency said.

Named after astronomer Edwin P. Hubble, the foremost American astronomer of the 20th century, the sophisticated optical observatory was placed into orbit about 600 kilometers (370 miles) above Earth by the crew of the Space Shuttle Discovery on April 25, 1990.

This is not the first time such a fault has occurred. A series of space missions were needed to repair technical problems -- affecting the gyroscopes among other things -- since Hubble's launch in 1990.

Three space shuttle missions in 1997, 1999, and 2002 repaired the gyroscopes and added new instruments including a near-infrared spectrometer and a wide-field camera. In 2009. six new gyros were installed -- three are used for maximum efficiency and three for backup. Two of the backup gyros had already failed since 2009.

The current fault had been anticipated because the gyroscope had been "exhibiting end-of-life behavior for approximately a year," according to NASA.

Though the telescope is temporarily out of action, NASA is confident it will soon be back on track. The remaining three gyros available for use are technically enhanced and therefore expected to have significantly longer operational lives.

On Monday, NASA tweeted: "The Hubble team is working to resume science after Hubble entered safe mode due to 1 of 3 gyros failing. Analysis and testing on the backup gyro are ongoing to determine why it is not performing as expected.

A 2009 servicing mission installed six new gyroscopes, according to NASA. Ideally, Hubble would use three of them simultaneously "for maximum efficiency," but it can continue making observations with one, the agency said in another tweet.

In 2020 NASA will launch Hubble's successor, the James Webb Space Telescope, a more powerful instrument that will offer astronomers unprecedented views of the cosmos.