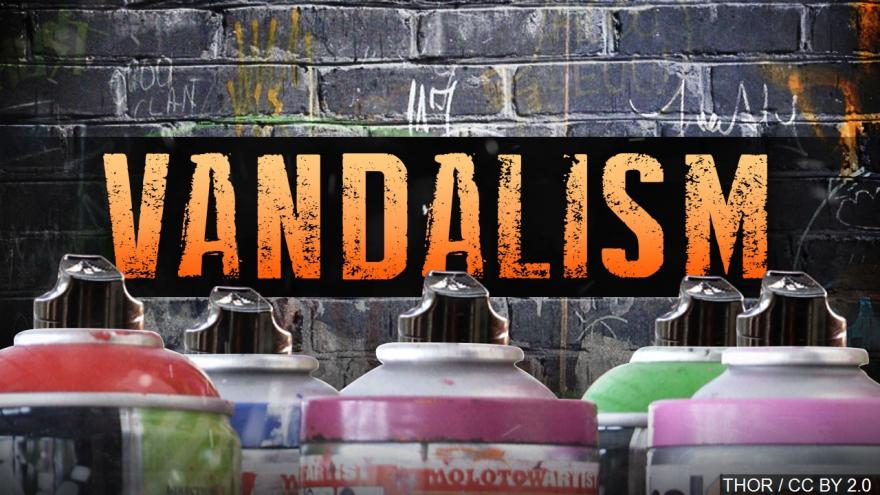 (CNN) -- A Kentucky teen is under arrest after being accused of vandalizing a Hindu temple in Louisville earlier this week, police said.

The suspect, a 17-year-old white male, is believed to have acted alone. He was arrested and charged with 1st-degree criminal mischief and 3rd-degree burglary after the Louisville Metro Police Department received a tip, authorities said.

Doors broken down and a knife stabbed into a chair

The break-in at Swaminarayan Temple was reported Tuesday morning. Temple members found their place of worship desecrated with what police said were hate-filled religious phrases and black crosses. A knife had been stabbed into a chair and several doors were broken down, police said.

"To come into the temple today and to see the words of hate, the paint on the posters, the desecration of this temple is heartbreaking," Conrad said Wednesday.

'This wasn't an attack by a religion'

Temple spokesman Rajesh Patel said Friday that temple members were shaken up by the vandalism, especially when they saw a poster of their deity covered with paint.

"When you go and touch what's sacred to us, that got people shaken up," Patel said.

Patel told CNN this was the first incident of its nature for the Hindu community in Louisville and the temple had not been threatened previously.

"Do we let a hate crime take over our lives or do we move forward? We will be back in service Sunday and we will be even stronger and even closer than before," said Patel. "And we will educate our children, that this wasn't an attack by a religion, but an attack by an individual."

The Jefferson County office of the Commonwealth Attorney told CNN a judge may consider a hate crime designation when the case comes to court.

Several state and local officials and representatives expressed their sadness, outrage and support over the incident on social media.

The community is rallying around the Swaminarayan Temple

Louisville Mayor Greg Fischer called the vandalism a "cowardly and unacceptable act" and urged the Louisville community to show their support for the temple and its worshipers by coming to an event scheduled for Saturday morning to help clean up the "repugnant messages of hate" left behind.

Janice Cates, director of the mayor's Compassion Initiative, said they are expecting at least 100 people to attend the clean-up, including faith leaders from the Muslim and Christian communities of Louisville who have all shown an "outpouring of support."

"This community really comes together in times of strife like this," Cates added.