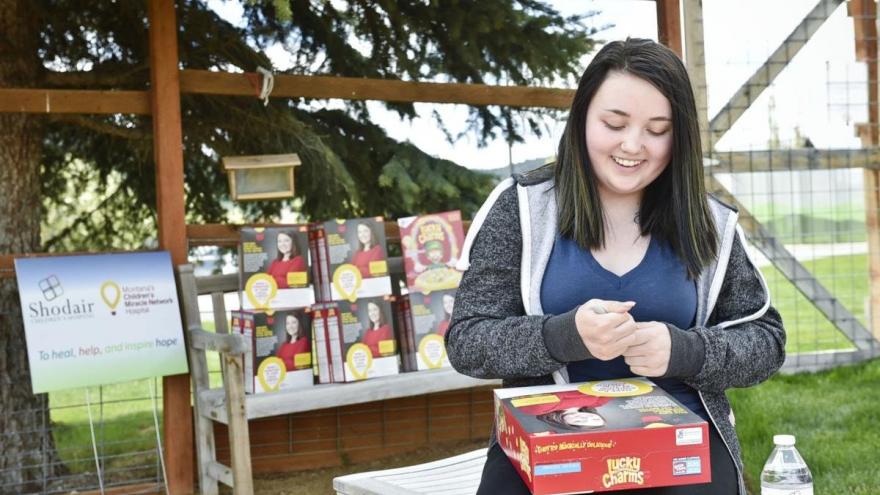 "It's amazing and a little surreal when thinking about where I was two years ago," Nyman said about seeing herself on a box of cereal. "In a way I can look at it and be reminded that I made it, I survived."

A partnership between General Mills and CMN, the cereal box campaign is aimed at raising awareness of the needs of children suffering from poor mental health. They also partnered with Costco, which is the only store selling these boxes, where donations can be made to the CMN throughout the month of May.

The boxes featuring Nyman are available in Costco stores throughout Montana, though it appears they are already sold out in Helena.

Nyman has been very open about the struggles she has faced with her mental health. She has no doubt that she would not be alive today if it weren't for the help she received from Shodair, even though she had overwhelming support from her family.

In addition, she said she would have dropped out of school if it weren't for the Project For Alternative Learning. Nyman will be a senior next year, and her love for the school makes her an advocate for that program as well.

"She is a little spitfire, unafraid to tell you how it is," Listoe said. "She is an excellent ambassador for Shodair, CMN and mental health."

Listoe said she believes Nyman grew through her relationship with Shodair. Over time, Nyman and her family became part of the Shodair family and a patient relationship grew into more of a friendship, according to Listoe.

This is something Nyman agrees with. She said that through her work as a champion she has made further connections with Shodair staff. This is on top of the close relationships she made with staff as a patient.

Nyman's relationship with Shodair also helped her with the intimidating task of becoming a national champion.

"Going into this I didn't have to worry about them judging me," Nyman said. "They know me and they know my situation. They were willing to do whatever they could to make it comfortable."

During her time as a champion, Nyman has traveled with the CMN and shared her story. She went to Las Vegas and spoke to over 7,000 people about the importance of mental health. There she met a lot of new people and heard their stories.

Nyman said she even met a man who said her story inspired him to speak about his own mental health struggles, something he had been quiet about the majority of his life. Nyman even used her birthday as an opportunity to raise money for CMN hospitals.

Nyman will remain a champion for the remainder of 2020. She hopes the COVID-19 pandemic will die down a bit so she can resume traveling and telling people her story.

Soon after, she will graduate from PAL. Nyman said she doesn't know what she wants to do after graduation, but she will remain an advocate for mental health regardless.

"For me it's really a need to keep advocating for mental health as much as I possibly can," Nyman said.