Teen may have died during game of 'Russian Roulette' 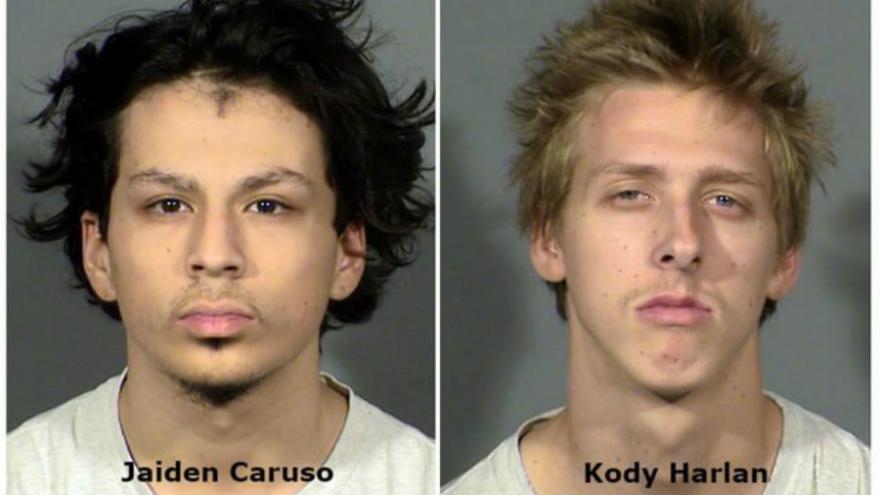 Las Vegas, NV (KTNV) -- Police say that Matthew Minkler may have been killed during a modified game of Russian Roulette on the morning of June 8.

According to the arrest report, Jaiden Caruso and Kody Harlan left Minkler to bleed out on the kitchen floor of the vacant home immediately after the shooting. They returned to the house shortly after to clean up the scene and hide the body. At no point did they attempt to render aid, according to the report.

Minkler's body, covered by a plastic sheet, was later found in a closet. It was also observed that a profanity had been spray painted on the closet door.

Caruso and Harlan were arrested Friday evening after they crashed a stolen car during a police chase. Several juveniles inside the car got out and ran.

Harlan told police after he was taken into custody that he had been present during a murder which took place earlier in the day. He then led police officers to the abandoned home on Cool Lilac Avenue.

According to Harlan, Minkler was shot in the face by Caruso. Harlan said that Caruso "never allowed the other participants to handle the firearm or pull the trigger themselves."

Several videos of the scene of the shooting were found on Caruso's cell phone, along with videos of him with a gun before the shooting. Caruso can be heard saying "Bro, I just caught a body." The phrase "caught a body" usually means that the person is saying they have killed someone. Another voice can be heard asking what to do with Minkler's body. Caruso does not respond and walks "calmly to the kitchen sink, wets his hands and begins to clean his shoes."

Minkler's wallet and a gun were found in the stolen vehicle. Police were able to determine that Caruso and Harlan took $300 from the wallet after the shooting and purchased shoes and drugs before they were arrested by police.

Caruso and Harlan are being held at the Clark County Detention Center. They have been certified as adults by the district attorney.