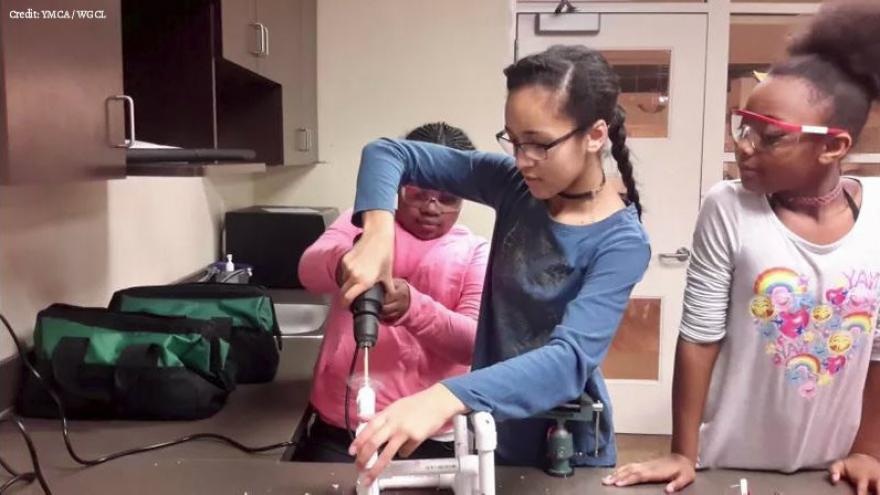 ATLANTA, Ga.(WGCL) -- While many teenage girls in America are often preoccupied with taking selfies or choosing their next outfit, one metro Atlanta girl is focused on breaking barriers in the engineering world.

Madison Kenney, 14, of Sharpsburg, has more than six-years’ experience at building robots. For the past three years, she’s been captain of an all-girls robotics team called “Robo Chicks Robotics.”

But that’s not all she does to keep herself busy. She also coaches four teams of younger girls at a southwest Atlanta YMCA, teaching them how to build robots that compete in underwater races.

"I made my first robot when I was around eight years old, said Madison.

She remembers it well. She was attending a Girl Scouts expo that promotes science, technology, engineering and math.

"They had Lego crocodile that I could program to open and close its mouth, and it was just the most amazing thing to me,” said Madison. “I wouldn't leave, not for one second, and I told my mom, 'This is what I want to do.'"

Her fascination for building robots became an obsession. So her mother decided to enroll her in an online public charter school called Georgia Connections Academy. That way, Madison could take her classes online and still have flexibility for all her robotics competitions.

She's now a grade level ahead – 9th grade instead of 8th like other girls her age – and she's already enrolled in classes at Georgia Gwinnett College.

Madison’s dream is to be a mechatronics engineer.

“It's a combination of mechanical and electrical engineering,” she explained.

Madison enjoys teaching younger girls about engineering and robotics. At age 13, she wrote a grant so she could coach the girls at the Young Family YMCA.

"I was really blown away when Madison reached out to me,” said the center’s executive director Gavin McGuire.

He said watching the girls compete recently in an underwater robotics competition was inspiring.

"It really gave them the confidence that they need not only in school, but you also have a lot of aspiring engineers in that group,” McGuire said.

Madison has received numerous awards and accolades for her accomplishments. But that’s not what motivates her. What does?

"I really want to set an example for other girls,” she said, “showing them, 'Hey, you can do this, too."