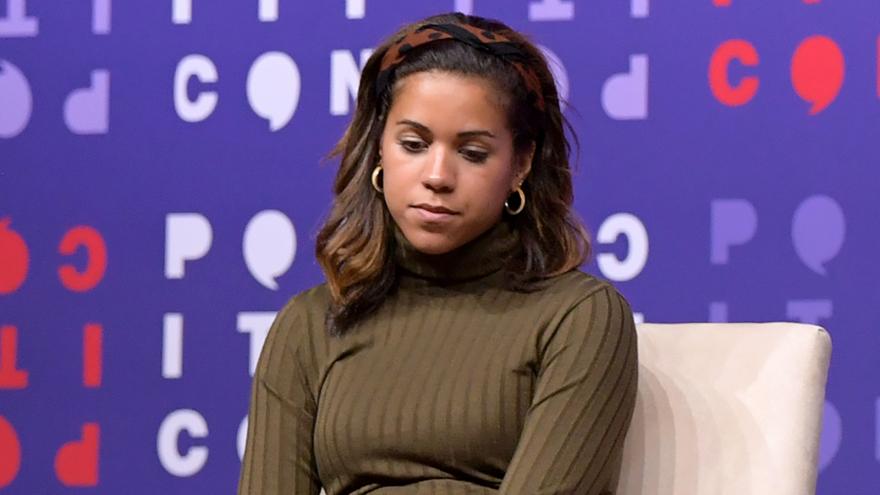 Alexi McCammond will not become editor-in-chief of Teen Vogue. Her appointment to the job sparked outrage because of anti-Asian tweets she posted a decade ago. - Jason Kempin/Getty Images for Politicon

(CNN) -- Alexi McCammond is out as editor-in-chief of Teen Vogue even before officially starting, she and the magazine's owner announced Thursday. The announcement of her appointment to the job had sparked outrage from the publication's staffers and readers as well as some celebrities because of anti-Asian and homophobic tweets she posted a decade ago.

"I became a journalist to help lift up the stories and voices of our most vulnerable communities. As a young woman of color, that's part of the reason I was so excited to lead the Teen Vogue team in their next chapter," McCammond tweeted. "My past tweets have overshadowed the work I've done to highlight the people and issues that I care about — issues that Teen Vogue has worked tirelessly to share with the world — and so Condé Nast and I have decided to part ways."

"I should not have tweeted what I did and I have taken full responsibility for that. I look at my work and growth in the years since, and have redoubled my commitment to growing in the years to come as both a person and as a professional," McCammond continued.

The Daily Beast first reported the news of her exit.

Condé Nast, which owns Teen Vogue, The New Yorker, and other popular magazine titles, was aware of McCammond's tweets prior to her hiring, the company's Chief People Officer, Stan Duncan, revealed in an email to staff on Thursday announcing the news. He wrote that McCammond was "straightforward and transparent about these posts during our interview process and through public apologies years ago."

McCammond's racist tweets, in which she mocked the appearance of Asian people and perpetuated stereotypes about them, had previously surfaced in 2019 when she was working at Axios. She apologized for them at the time.

"Given her previous acknowledgement of these posts and her sincere apologies, in addition to her remarkable work in journalism elevating the voices of marginalized communities, we were looking forward to welcoming her into our community," Duncan's email reads. "In addition, we were hopeful that Alexi would become part of our team to provide perspective and insight that is underrepresented throughout media."

But McCammond's tweets resurfaced after Condé Nast announced her hiring on March 5, and they immediately prompted backlash. The weekend after the news broke, Diana Tsui, editorial director of recommendations at The Infatuation, posted on Instagram a series of text-based photos calling attention to the McCammond's old tweets and said she was a "questionable hire." It was recirculated by Diet Prada, an Instagram account with 2.5 million followers that shares gossip and drama about the fashion industry.

A group of more than 20 Teen Vogue staffers sent a letter to management on March 8 expressing concerns over McCammond's hiring. Staffers publicly shared statements on Twitter about the letter. Actress Olivia Munn, who has been speaking out against the recent wave of anti-Asian attacks around the country, tweeted her support for Teen Vogue's staffers.

McCammond, who was not supposed to formally start in the role until March 24, released an apology to Teen Vogue staffers that same day. She wrote, "There's no excuse for language like that" and that she was "committed to amplifying AAPI voices across our platforms, and building upon the groundbreaking, inclusive work this title is known for the worldover," using the acronym for Asian Americans and Pacific Islanders.

McCammond apologized again on March 10, with a lengthier note that reaffirmed her commitment to the AAPI community. She also shared that she spoke with the Asian American Journalists Association. By then, Ulta Beauty had paused an ad campaign with Teen Vogue.

McCammond's hiring continued to spur conversations inside Condé Nast. Duncan said in his email announcement that he and Yashica Olden, Condé Nast's chief diversity and inclusion officer, had many conversations with the staff over the past week.

"Our most important work as a company right now is embodied in the focused efforts we are all undertaking to become more equitable and inclusive. Our commitment to these issues is sincere and unwavering," he wrote.

Jim VandeHei, CEO and cofounder of Axios, replied to McCammond's tweet Thursday to express support for her.

"You will always be part of the @axios family. @alexi admited her mistakes, repented (years ago and again of late) and showed during her four years with us she was a strong woman with a big heart. She was a great colleague who often stood up 4 others. Sad outcome @TeenVogue," VandeHei tweeted.

These tweets have not been the only controversy involving McCammond recently. TJ Ducklo resigned in February from his position as deputy press secretary for President Joe Biden after he threatened a Politico reporter who planned to write a story about his and McCammond's previously unreported relationship.