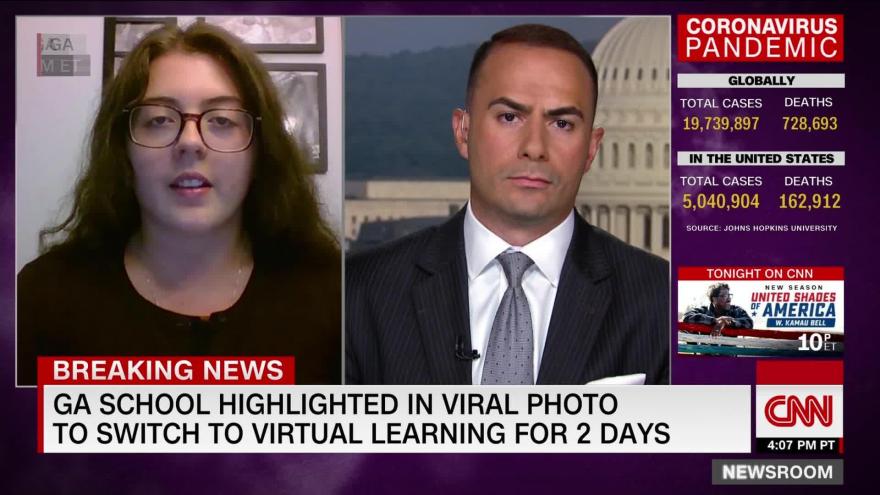 North Paulding High School sophomore Hannah Watters told CNN she and her family and friends have been receiving screenshots of group chats with threatening language against her.

(CNN) -- A teen who shared a photo of a crowded hallway at her Georgia high school last week says she has been receiving threats after the image went viral.

North Paulding High School sophomore Hannah Watters told CNN she and her family and friends have been receiving screenshots of group chats with threatening language against her.

One message said "I know where this girl lives," she said. Other threats included, "We're going to jump every girl named Hannah in the tenth grade," and, "Hannah is going to have a rough day at school on Monday," Hannah told Boris Sanchez Sunday night on CNN's "Newsroom."

The teen said she understands why people are upset but said she shared the photo because she felt like it was the right thing to do.

"I feel like a lot of teachers have my back because they know how dangerous it is going to school. But I know that a lot of the kids that I go to school with, I've already gotten backlash for it, threats and things like that," Hannah said. "I know I'm doing the right thing and it's not going to stop me from continuing doing it. But it is concerning, especially since it's a lot of the people I go to school with, people I've known for years now, that are threatening me."

Hannah previously told CNN she shared the photo because she was concerned for the safety of her classmates and school staff, as well as the wider community.

As of Sunday, nine students at the school had tested positive for the virus and the district announced it would move learning online for Monday and Tuesday.

Following the news that the school will be closed for at least two days, Hannah said many people have told her they are getting tested for the virus.

"I've heard from many friends that they've been getting tests or that their family members or their teacher has gotten tested because it hasn't been safe over these few days," she said. "We were only in school for three days and the fact that we already have nine cases at the end of that week is concerning because we don't know how many people those nine people came in contact with."

"It's going to spread like wildfire in that school," she added.

School 'used us as guinea pigs'

Hannah said she was initially suspended for posting the photo. But on Friday, her mother told CNN the suspension had been reversed. Lynne Watters spoke with the school's principal Friday morning, she said, and was told her daughter would not be suspended and a suspension would not appear on her record.

On Sunday, she said she doesn't think the school would have addressed the issue as early as it did if she hadn't posted the image.

"We could have just delayed opening like many other schools," she said. "They kind of sent us to school and used us as guinea pigs to see what would happen later on."

The sophomore also said she understands that people want to have the option for in-school learning for a variety of reasons, and she does too, but it's just not safe yet.

"We're all pretty concerned about going back and I know a lot of my teachers are too. Because we all want to go to in person," Hannah said. "I have no intention of shutting the county down because I know a lot of people don't learn well online, I don't learn well online, and I want to be able to go to in person school and have some type of normality this year for my semester. But we can't if we're not safe."