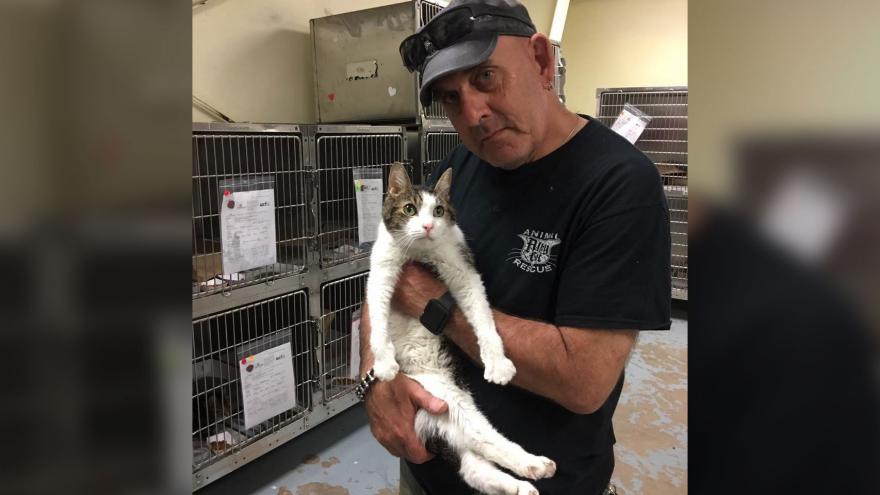 (CNN) -- A 14-year-old girl was arrested and charged with murder after police say she tied down and killed a 59-year-old Philadelphia man known for his animal rescue efforts.

Philadelphia police said they responded early November 5 to a report of a man in distress. Police entered the home and found a man, later identified as Albert Chernoff, partially tied to the bed with a massive head wound and several slashes to his chest. He was pronounced dead at the scene.

A female was seen leaving the property before officers arrived, and police released surveillance video from inside the home to identify her. The girl, who is 14, arrived with her mother and two defense attorneys to turn herself in, police said.

She was arrested November 8 and a preliminary hearing is scheduled for November 27, court documents show. Given her arrest, the surveillance video has since been removed, police said.

Police have not named the girl.

Jane Roh, a spokeswoman for the Philadelphia district attorney, said officials have not decided whether to proceed in juvenile or adult court.

One of the teenager's attorneys, Howard Taylor, told CNN the girl is currently in juvenile detention.

"It's a very sad situation. Troubled girl. There's a reason police aren't saying much," Taylor said. "There's a lot more to it."

When asked whether she was a victim, he said he "wouldn't put it to that extent," but added that "he wasn't totally innocent, either."

Chernoff was a well-known animal rescue advocate in Philadelphia. In the wake of his death, the makers of the documentary film "The Cat Rescuers" shared a short video of Chernoff, showing his cat tattoos, and praised his "warmth and affability."

"The world is just a little bit colder today without this wonderful human being. Please take a moment to tell the cat rescuers in your life what they mean to you. We will never forget you, Al," their Facebook post read. "We lost a gracious soul."

"The animal rescue community, and especially the cat community has lost an amazing man," the group said. "He was one of the kindest people I've ever met and he would do anything for anyone. You are already missed and there is a hole in the heart of every cat rescuer that will never be filled."

Chernoff's cousin, David Levin, told CNN that the Army Reserve veteran helped him get a rescue dog and loved all animals, especially cats.

Chernoff's soft spot for his fellow creatures extended to elderly humans as well, Levin said. He'd give them rides to the grocery store free of charge, he said.

"He had a very dry sense of humor, so he was hilarious," Levin said. "I was blown away by the outreach, impact that he's had on the community."

Correction: This story has been updated to reflect that Chernoff did not own a rescue dog himself.