Teens in an SUV were throwing eggs at cars before a fatal crash, police say 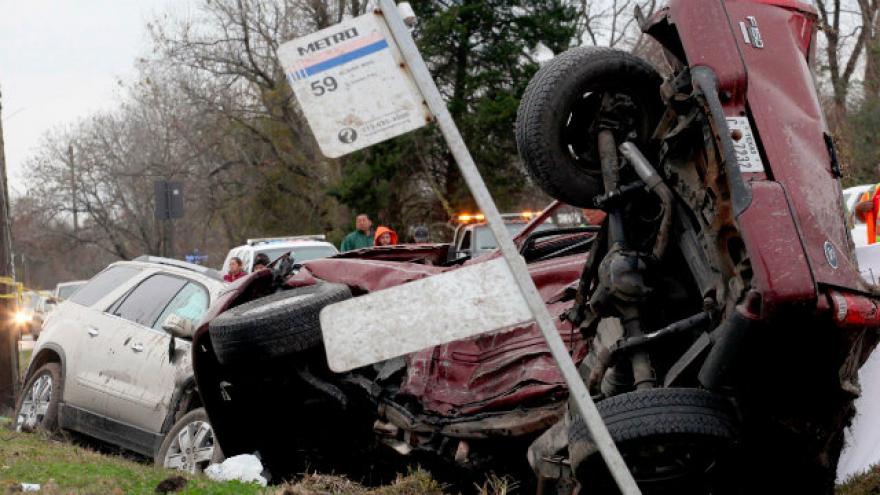 What started as an egg-throwing prank in suburban Houston, Texas, ended with a 14-year-old facing a murder charge after the SUV he was driving plowed into a truck and killed a woman, according to the Harris County Sheriff\'s Office. Photo courtesy Nicole Hensley / Houston Chronicle / AP

(CNN) -- What started as an egg-throwing prank in suburban Houston, Texas, ended with a 14-year-old facing a murder charge after the SUV he was driving plowed into a truck and killed a woman, according to the Harris County Sheriff's Office.

The teen driver and his passengers were reportedly throwing eggs at other cars before the crash, Harris County Sheriff Ed Gonzalez said via Twitter.

The fatal crash occurred Tuesday afternoon when the 14-year-old, with two other juveniles as passengers, drove a GMC Arcadia at a high speed through a red light and struck a Ford pickup truck, the sheriff's office said.

The Ford's driver, identified as 45-year-old Silvia Zavala, was dead at the scene when paramedics arrived, according to the sheriff's office.

The driver of a late-model Lincoln, also targeted in the egg throwing, allegedly brandished a semi-automatic handgun and chased after the GMC Arcadia at high speeds, according to Gonzalez.

CNN affiliate KHOU reported that the driver of the Lincoln is cooperating with investigators, who are trying to determine why the underage teen had access to the SUV.

The unidentified 14-year-old driver, who broke an ankle in the crash, was charged with murder and booked into the county juvenile detention center, Gonzalez said.

The sheriff's vehicular crimes division is investigating the incident.

"We don't wish harm on anyone. No one. But the parents... let's take care of our kids. Where were those parents of those teens?" Zavala's sister, Fabiola, told KHOU. "If you know your son is a bad kid, you need to be on top of them. What are they up to? Who are they hanging out with? What are they doing?"