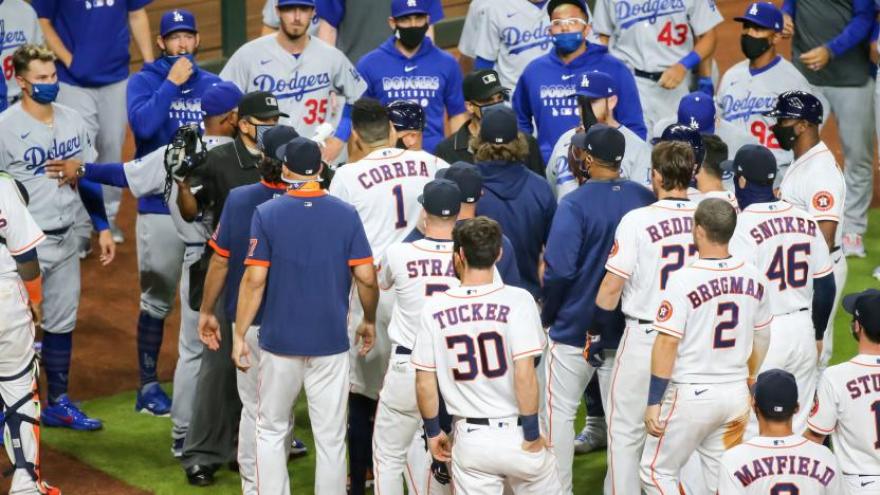 Tensions between the Astros and Dodgers ran high during their night game.

(CNN) -- Tempers flared during the Houston Astros and Los Angeles Dodgers game Tuesday night, the first time the teams have met since the Astros were handed a punishment by the league in January.

While the game in Houston started out on a good foot, tensions began to run high at the bottom of the sixth inning with two outs.

A pitch from Dodgers reliever Joe Kelly -- which did not appear to be a fastball -- buzzed near Astros shortstop Carlos Correa, causing Correa to fall, advancing runners to second and third. Correa stared back at the mound at Kelly. Correa went on to strike out to end the inning, and Kelly stuck out his tongue at the Astros' shortstop. The two sides exchanged verbal jabs, and the benches cleared. More words were exchanged, the television broadcast shows, but it appears that no punches were thrown.

The Dodgers won the game, 5-2. The teams will play each other again on Wednesday at 7 pm ET.

Major League Baseball doled out a punishment for the Astros in January after the league said Houston illegally created a system that decoded and communicated the opposing teams' pitching signs during its 2017 championship season -- the year the Astros defeated the Dodgers in the World Series.

The punishment included both Astros manager AJ Hinch and general manager Jeff Luhnow being suspended without pay for one season, forfeiture of the teams regular first and second-round selections in 2020 and 2021 drafts, as well as a $5 million fine. Astros owner and chairman Jim Crane fired both managers the same day.