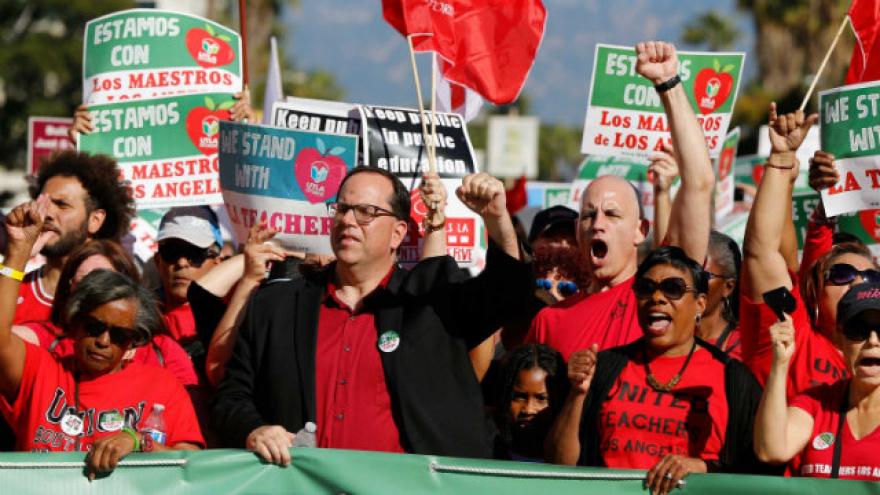 LOS ANGELES, Calif. (AP) — A tentative deal was reached Tuesday between Los Angeles school officials and the teachers union that will allow educators to return to classrooms after a six-day strike against the nation's second-largest district, officials said.

"I'm proud to announce that, pending approval by the teachers represented by UTA and educational professionals and this Board of Education, we have an agreement that will allow our teachers to go back to work on the campuses tomorrow," Garcetti said.

The agreement was broadly described by officials at the news conference as including a 6 percent pay hike and a commitment to reduce class sizes over four years. Details were promised to be released later.

District Superintendent Austin Beutner said he was delighted the deal was reached. But he hinted that financial challenges remained as he pledged to invest every nickel the district has while maintaining fiscal solvency.

"The issue has always been how do we pay for it?" Beutner said. "That issue does not go away now that we have a contract. We can't solve 40 years of underinvestment in public education in just one week or just one contract."

Some teachers were already declaring victory despite a lack of details about the agreement.

Thousands of boisterous striking teachers — many wearing red — and their supporters gathered on the steps outside City Hall.

The crowd began roaring, blowing horns and chanting the initials of Caputo-Pear as the smiling leader emerged from the building and walked through the throng of teachers hoisting signs as a band rocked out on a stage nearby.

Joaquin Flores, a special education teacher, said from what he'd been told teachers were getting a lot of what they asked for. He believed he would support the deal unless it weakened health care or didn't go far enough to reduce class size.

"It's almost like metaphoric," Flores said. "The sun's out. When we started, it was all rainy and cold. I feel like it's a new day. It feels like we're on the brink of something new."

Teacher Sharon Maloney said she was reluctant to support the deal without seeing the fine print.

She was skeptical that the district had made enough concessions on class size, health care benefits for new teachers or that the superintendent would spend enough of about $2 billion in reserves.

"I suspect the motives of Beutner," Maloney said. "If he doesn't release some of that $2 billion and there's no understanding for moving forward how he's going to cut out this crap that we're running at a deficit and yet our reserves are going up every year. That is false. I'm a math teacher. That is suspicious."

Talks resumed Thursday at Garcetti's urging. The mayor does not have authority over LAUSD, but he sought to help both sides reach an agreement after nearly two years of fruitless talks that led to the walkout.

Clashes over pay, class sizes and support-staff levels in the district with 640,000 students led to its first strike in 30 years and prompted the staffing of classrooms with substitute teachers and administrators. It followed teacher walkouts in other states that emboldened organized labor.

The district maintained that the union's demands could bankrupt the school system, which is projecting a half-billion-dollar deficit this budget year and has billions obligated for pension payments and health coverage for retired teachers.

Negotiations broke down in December and started again this month. The union rejected a district offer on Jan. 11 to hire nearly 1,200 teachers, counselors, nurses and librarians and reduce class sizes by two students.

Teachers hoped to build on the "Red4Ed" movement that began last year in West Virginia and moved to Oklahoma, Kentucky, Arizona, Colorado and Washington state. It spread from conservative states with "right to work" laws that limit the ability to strike to the more liberal West Coast with strong unions.