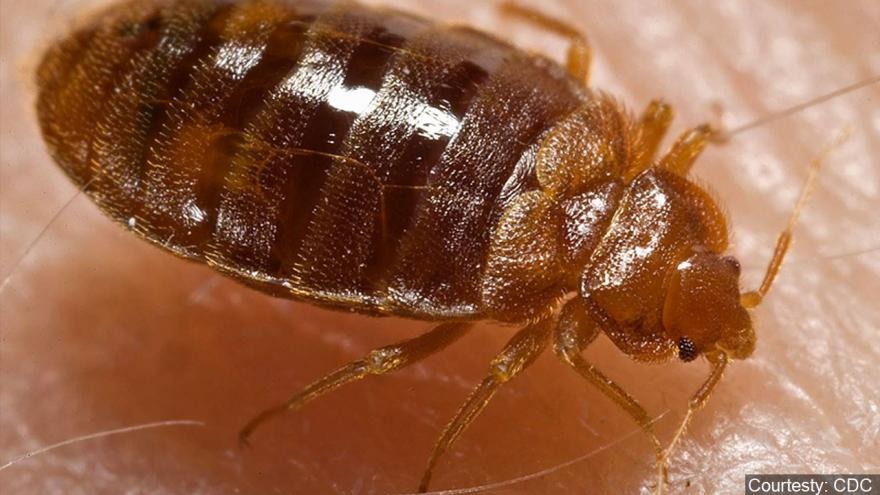 MEMPHIS, Tenn.--(BUSINESS WIRE)--To kick off the busy summer travel season and Bed Bug Awareness Week, Terminix ®, a leading provider of termite and pest control services and a ServiceMaster ® (NYSE: SERV) company, June 3 announced its 2019 ranking of the top 50 most bed bug-infested cities in the country.

Philadelphia reclaimed the top title it last held in 2014, while Cleveland fell to No. 7 after two years as No. 1 on the list. New York, Dallas, Indianapolis and Cincinnati rounded out the top five spots. Ohio dominated the list with six cities in the top 50, and Florida followed closely behind with five.

Terminix based its rankings on the number of services rendered in each city in the past year*. The top 50 cities for bed bug infestations in the United States are: 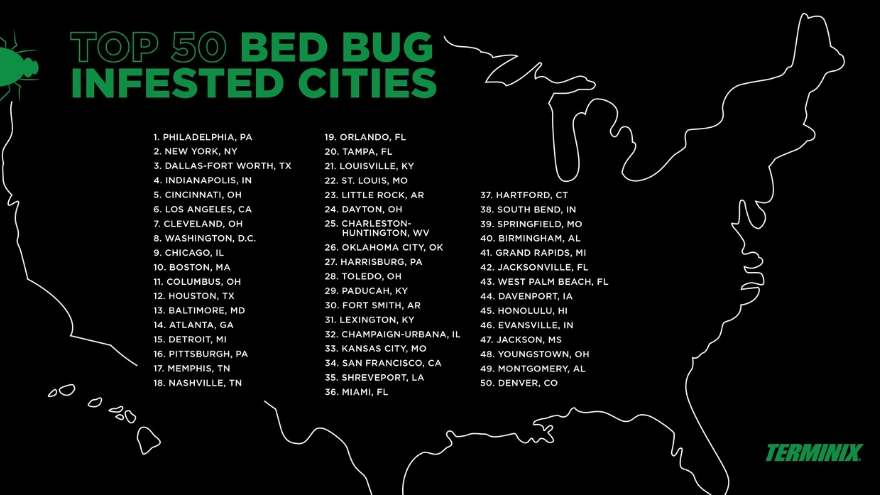 “Bed bugs continue to pose concerns for public health, as their presence is felt across the country, in cities large and small,” said Matthew Stevenson, president of Terminix Residential. “Since pioneering this annual list almost a decade ago, Terminix has proven itself as a leader in bed bug detection, treatment and eradication. We’ve helped bring awareness to an epidemic that can lead to a variety of negative physical health, mental health and financial consequences.”

New research reveals one-fifth (22%) of Americans polled have had a bed bug encounter, and the odds are much higher for those with children (35%). Despite the high incidence rates and increased awareness of bed bugs, this research shows nearly half of the country who travel (48%) do not know what precautions to take to guard against them.**

As the summer travel season approaches, Terminix experts warn that bed bugs can be found in more than just bedding and mattresses. They can easily hitchhike from place to place via personal belongings, such as jackets, purses and luggage, or hide in upholstered furniture and behind baseboards.

Terminix offers the following tips to mitigate the risk of being bitten or transporting bed bugs:

Check hotel headboards, mattresses and box springs for live bed bugs, their exoskeletons and/or dark blood spots.While full-grown bed bugs are about the size, shape and color of an apple seed, travelers should also look for newly hatched nymphs, which are cream-colored and the size of letters on a penny, as well as small translucent eggs, which may be found in the tucks and folds of sheets.Hang all clothing. Leave nothing lying on the bed or furniture.Avoid storing clothing in a hotel’s furniture drawers.Store suitcases on a luggage rack as far away from the bed as possible.Vacuum suitcases when returning home, and immediately wash clothing in hot water.Between trips, store luggage in a sealed plastic bag in a garage or basement, away from bedrooms.If you suspect you have bed bugs, have your home inspected by a trained professional. Bed bug infestations are extremely unlikely to be controlled by over-the-counter treatments.

* This ranking was created by compiling bed bug-specific data of services rendered at more than 300 Terminix branches across the country. The rankings represent Metropolitan Statistical Areas (MSAs) with the highest number of actual services between April 16, 2018 and April 15, 2019.

**Data gathered in March, 2019, through an online survey of 1,516 randomly selected American adults who are Springboard America Community panel members and was executed by Maru/Blue. For comparison purposes, a probability sample of this size has an estimated margin of error (which measures sampling variability) of +/- 2.5%, 19 times out of 20. The results have been weighted by education, age, gender and region to match the population, according to Census data. This is to ensure a sample representative of the entire adult population of America. Discrepancies in or between totals are due to rounding.