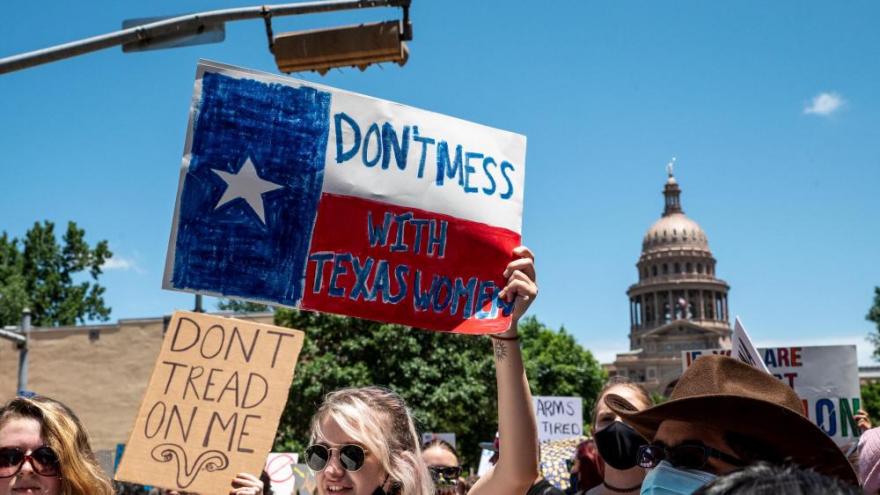 Texas 6-week abortion ban went into effect early Wednesday. Abortion protesters here hold up signs as they march down Congress Ave outside the Texas state capitol on May 29, in Austin, Texas.

The lack of judicial intervention means that the law -- which is one of the strictest in the nation and bans abortion before many people know they are pregnant -- goes into force absent further court intervention.

The law allows private citizens to bring civil suits against anyone who assists a pregnant person seeking an abortion in violation of the ban.

No other six-week ban has been allowed to go into effect -- even briefly.

"What ultimately happens to this law remains to be seen," said CNN Supreme Court analyst and University of Texas Law School professor Steve Vladeck, "but now through their inaction the justices have let the tightest abortion restriction since Roe v. Wade be enforced for at least some period of time."

The case comes as the justices are poised in the upcoming term to rule on the constitutionality of a Mississippi law that bars abortion at 15 weeks.

Under the Texas law, abortion is prohibited when a fetal heartbeat is detected, which is often before a woman knows she is pregnant. There is no exception for rape or incest, although there is an exemption for "medical emergencies."

Abortion providers asked the justices to block the ban while legal challenges played out because they argued that if it were allowed to go into effect it would "immediately and catastrophically reduce abortion access in Texas," ultimately forcing many abortion clinics to close.

They argued if the law were allowed to take effect it would have the impact of "barring care for at least 85% of Texas abortion patients" and would mean that lawsuits could be filed against a broad range of people including a person who drives their friend to obtain an abortion, someone who provides financial assistance and even to a member of the clergy who assists a patient.

Abortion access had already been curtailed by the ban by the time Wednesday morning rolled around. Whole Woman's Health — which operates clinics in McAllen, McKinney, Austin, and Fort Worth, and led the federal lawsuit challenging the ban -- said that it was only offering the procedure if "if no embryonic or fetal cardiac activity is detected in the sonogram."

Tuesday night, two hours before the ban was set to go into effect, one of the clinics -- Whole Woman's Health -- reported that it was providing abortions. "Our waiting rooms are filled with patients," the clinic tweeted, adding that "anti-abortion protestors are outside, shining lights on the parking ...we are under surveillance." In another tweet, the clinic said, "This is what abortion care looks like. Human Rights warriors."

The Supreme Court's failure to respond prompted a furious backlash from supporters of abortion rights just after the law went into effect.

"Access to almost all abortion has just been cut off for millions of people, the impact will be immediate and devastating," the ACLU said in a tweet.

In the novel legal strategy, the state Legislature designed the law to prevent government officials from directly enforcing it. The move was meant to make it much more difficult to bring a pre-enforcement challenge because there are not the usual government officials to hold accountable in court.

Instead, the law allows private citizens -- anywhere in the country -- to bring civil suits against anyone who assists a pregnant person seeking an abortion in violation of the ban.

Opponents say the law is part of a new wave of laws put forward by states hostile to abortion rights and will inspire other states to follow suit.

Lawyers for Texas officials urged the justices to allow the law to go into effect, saying that the clinics had not shown that they will be "personally harmed by a bill that may never be enforced against them."

The case comes as the justices have already agreed to consider a Mississippi law during their upcoming term that bars most abortions at 15 weeks. Supporters of abortion rights say the Mississippi and Texas laws are a direct challenge to Roe v. Wade, the landmark 1973 opinion legalizing abortion nationwide prior to viability, which can occur at around 24 weeks of pregnancy.

The clinics initially filed suit not only against Texas Republican Attorney General Ken Paxton, but state judges and clerks in Texas with the jurisdiction to enforce the law. They also targeted Mark Lee Dickson who serves as the director of Right to Life East Texas.