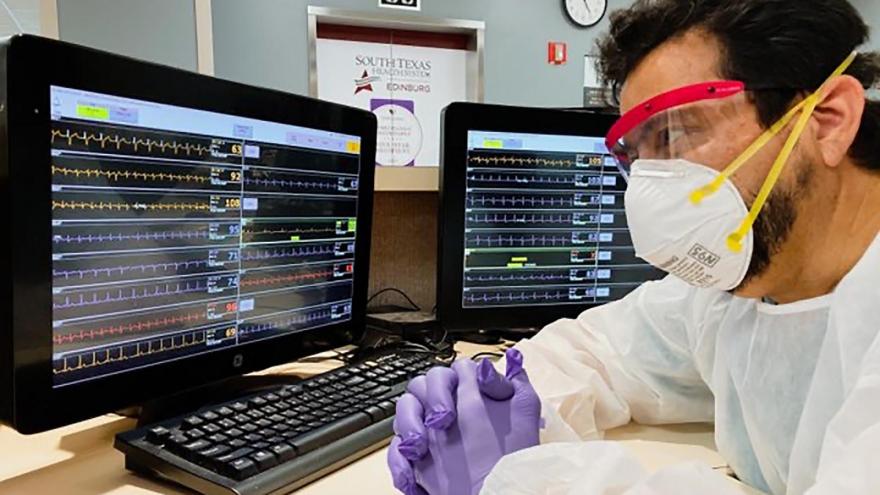 (CNN) -- Jessica Ortiz said she and her twin brother, Jubal, were inseparable. Even when Jubal lay dead in an open casket with plexiglass over his body -- out of fear he could still be contagious with coronavirus -- she couldn't help but lean down and touch him at his viewing earlier this month.

Now, weeks later, she wears a necklace with his ashes.

"He meant the world," Jessica, who is from Hidalgo County in South Texas, said, remembering her 27-year-old brother. "I just wish it wasn't him."

Health experts say there's no evidence that bodies are contagious after death, but the moment speaks to the fear and concern in Hidalgo County, where health officials say Covid-19 is wreaking havoc on communities. Hospitals started reaching capacity earlier this month in the Rio Grande Valley, which has become the main hotspot in Texas.

Vallejo said walking through the hallways at the hospital is a "massive shock," and he worries about the mental health of his colleagues who are overwhelmed with the sheer number of patients. "It's not easy to handle something like this."

The situation has grown so dire that Hidalgo County officials threatened this week to criminally prosecute people who don't quarantine after testing positive for Covid-19. Hidalgo County Judge Richard Cortez issued a shelter-at-home order for all residents starting Wednesday.

The order includes a curfew, travel limitations and facial covering requirements and comes as the county's hospitals have hit capacity, Cortez said.

"Please stay in compliance and protect yourself and your loved ones by following these important steps," Hidalgo County officials tweeted on Tuesday. "Failure to comply could result in criminal prosecution."

The state of Texas has identified 351,071 Covid-19 cases, and 4,199 deaths as of Tuesday afternoon, according to Johns Hopkins University data. On Monday, Hidalgo County reported 34 new deaths due to Covid-19 complications, and 524 new cases.

Dr. Peter Hotez of the Baylor College of Medicine said Southern states like Texas and Florida are seeing increased deaths because "the hospitals are overwhelmed."

"We had 34 deaths in the last 24 hours in not a very large county, so South Texas is just getting hit incredibly hard," Hotez said Tuesday on CNN.

Texas was one of the first states to reopen in May after Gov. Greg Abbott ended the state's stay-at-home order and allowed businesses such as retail stores, malls, restaurants and theaters to reopen that day at limited capacity.

In late June, Abbott announced he was pausing any further phases to reopen the state as cases surged.

While Abbott implemented a mask requirement for nearly all Texans in early July, he has kept in place a ban on local officials from issuing stay-at-home orders, despite increasing pressure from leaders of major areas like Houston and Dallas.

In an interview Tuesday night with CNN affiliate KRGV in McAllen, Abbott acknowledged the dramatic numbers coming out of the Rio Grande Valley.

Abbott said he supported the Hidalgo County judge's decision to enforce curfews but did not explicitly support the shelter-at-home order when asked about it. Abbott's office said earlier Tuesday the order lacked legal authority and was more of a recommendation.

"There are parts of the orders which I have the complete latitude to enforce, such as the curfew," Abbott said. "That is the authority that the local County judges always have been including right now, and it's my understanding that in Cameron and Hidalgo County they intend to be enforcing curfews. That is one of the strategies to make sure they reduce the number of people out and about."

The governor said the state has already sent 1,200 medical personnel to the region and he expects to send more. The US Navy said in a statement on Tuesday it was also deploying some 70 medical personnel to support civilian hospitals in Texas. The US Army has also sent medical professionals to the Rio Grande Hospital.

Abbott, who spoke with officials and hospital executives in the Rio Grande Valley earlier Tuesday, said the state is working to partner with hotels to provide rooms for people who are recovering from Covid-19 but can't go home yet so they don't infect others.

The governor pleaded with audiences to wear masks and take the virus seriously.

"It is essential that everybody -- not just leaders -- but every resident in the Rio Grande Valley understand: You need to be wearing a face mask or face covering when you go out."

Dr. Ivan Melenedez, the Health Authority in Hidalgo County and a practicing physician, said the region needs all the help it can get.

"If I found a lamp on the beach and I rubbed it and the genie came out, my first wish would be: President Trump please, please send the USNS Mercy," he said, referring to Navy hospital ship that's been used to alleviate hospital stress during the pandemic. "Let's park it out in the Gulf, which is, you know, 35 miles away. That gives us 1,000 beds with all the personnel attached to it."

That would also help the medical professionals who've been working 18-hour days for weeks on end finally have a break, he said. "Boy, that would be a gift from God."

Melendez described the hospitals in South Texas as a parallel universe -- buildings that look peaceful from the outside but are going through hell on the inside.

"If (people) only knew what lurks behind those walls as they're driving down the expressway," he said. "If they could only have X-ray vision and see the the pain and the suffering."

The reasons why the region is hit so hard are two-fold, according to Melendez. First, he pointed to the high rates of diabetes and obesity in the Rio Grande Valley. Combined with poverty and limited access to health care, those comorbidities make combatting coronavirus a huge battle for many.

"Their infrastructure is non-existent. You can't even go to a hospital right now," he said. "So if you put a point and then draw a circle around where we live and go three hours every way, there's 14 million people -- the majority of them living in Mexico."

"They're human beings -- we don't care about immigration status" he added. "They come in, we got to take care of them."

The Hispanic community has been disproportionately hurt by the coronavirus pandemic. In Hidalgo County, where 92.5% of the county's 860,000 residents identify as Latinx, Dr. Hotez told CNN many of the victims are poor, Hispanic, working in jobs deemed essential and that they have to be at work to support their families.

"There are many stories across Texas and across the southern United States among Hispanic and Latinx communities just getting hammered, and we're not really getting a full accounting of this," Hotez said.

In nearby Cameron County, which includes Brownsville, officials claim the death toll is much larger than what is being reported.

In a press conference Monday, Cameron County Judge Eddie Treviño Jr. said that the reporting of both positive cases and number of fatalities is running behind in the county. He said the reason is due to the health department being overwhelmed with the number of cases and deaths growing over the past six weeks.

Dr. James Castillo, the public health authority for the county health department, said during the press conference that the number of deaths would lag in reporting by a month or more. The reporting system is manual, and he said the staff is overwhelmed.

Statewide, Texas announced its highest hospitalization number yet on Tuesday, with 10,848 people currently in hospitals, according to the latest data from the Texas Department of State Health Services.

Vallejo, the critical care pulmonologist in McAllen, said he is grappling with frustration as he watches his colleagues work tirelessly in exposed environments -- yet he still hears reports of people ignoring social distance guidelines on the outside.