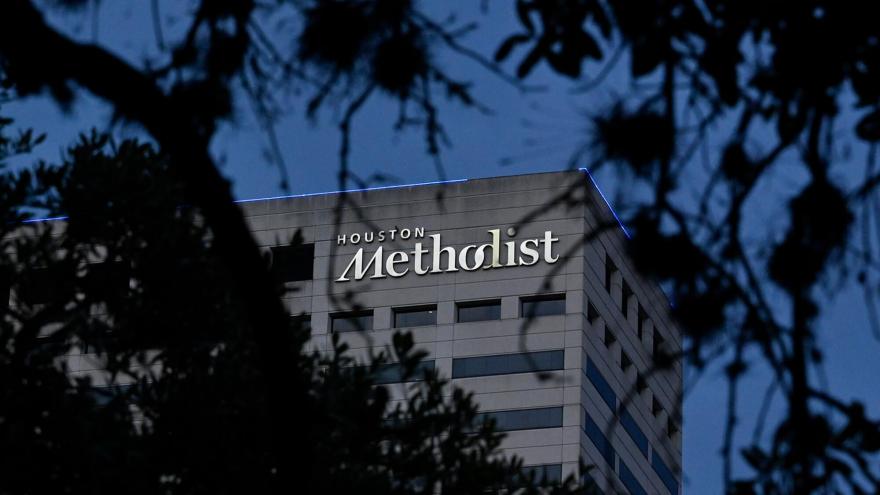 The Houston Methodist name is seen on one of the buildings in the Methodist Hospital system on Sunday, July 5, 2020, in Houston.

(CNN) -- The doctor who had her medical staff privileges suspended over Covid-19 "misinformation" on her social media has sent a letter to Houston Methodist stating she is resigning, a spokesperson for the hospital told CNN Tuesday.

Dr. Mary Bowden, an ear, nose and throat doctor, also tweeted about her resignation saying, "I have broken free from Methodist and very much appreciate the flood of support I have received!"

Stefanie Asin, public relations director with Houston Methodist told CNN that "(Bowden) is not an employee."

On Friday, Houston Methodist announced they had suspended Bowden's privileges after she posted "harmful" and "dangerous misinformation" about Covid-19 and its treatments on social media, according to the hospital.

The doctor was a recent addition to Houston Methodist's medical staff and used her social media to "express her personal and political opinions about the COVID-19 vaccine and treatments," Houston Methodist said in a statement on Twitter.

"Her privileges have been suspended," a spokesperson for the hospital told CNN.

Bowden's attorney Steven Mitby said the doctor has treated "more than 2,000 patients with Covid-19" at her private practice and that none of them have ended up in the hospital.

"Her early treatment methods work and are saving lives," he added.

Bowden's Twitter account shows a series of tweets praising the anti-parasitic drug ivermectin. The US Centers for Disease Control and Prevention and the US Food and Drug Administration have cautioned people against using the drug to treat Covid-19, CNN has reported.

Ivermectin is used to treat parasites such as worms and lice in humans and it is also used by veterinarians to de-worm large animals. The CDC warned about a sharp increase in reports of severe illness caused by the drug to poison centers.

Along with advocating for the use of ivermectin, Bowden also frequently criticizes vaccine mandates on her social media accounts, with Mitby adding that "Dr. Bowden is not anti-vaccine," but believes "people should have a choice."

The doctor herself is vaccinated, as mandated by the hospital for all physicians who work at Houston Methodist, the hospital said. In June, over 150 employees left the hospital after they put a vaccine mandate in place.

"These opinions, which are harmful to the community, do not reflect reliable medical evidence or the values of Houston Methodist."

As the Covid-19 pandemic continues, with deaths in the United States surpassing 762,692 and the casualties increasingly come from the ranks of the unvaccinated, there still remains a small group of doctors who have emerged as a huge source of misinformation, a CNN investigation found.

These doctors share a miasma of conspiracy theories and misinformation about Covid-19 vaccines, which have thus far proven the most effective weapon against the deadliest pandemic in 100 years.

"These doctors are taking advantage of the trust in them," said David Lazer, a political science and computer sciences professor at Northeastern University. "They are using the prestige of that term 'doctor' to convey misinformation."

Correction: An earlier version of this story incorrectly described the hospital personnel who left due to the vaccine mandate. It was 150 employees.