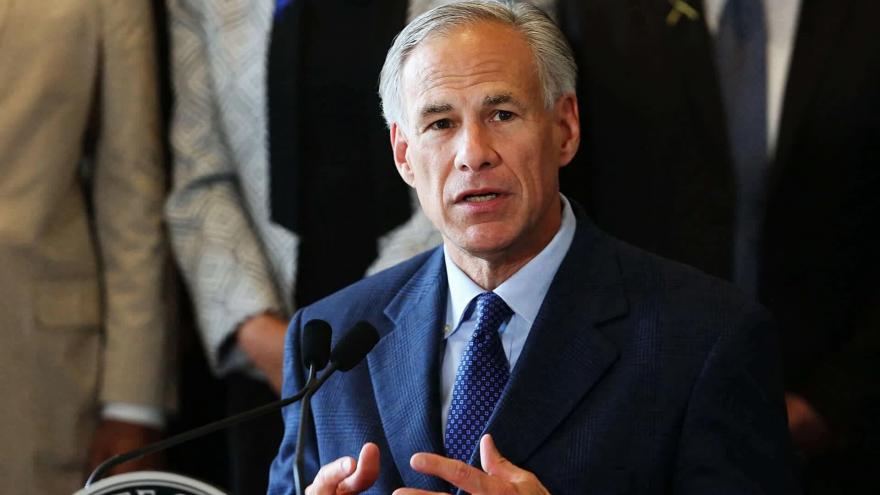 The restrictive voting measure adds Texas to the list of Republican-controlled states that have seized on former President Donald Trump's lies about widespread voter fraud and clamped down on access to the ballot box this year. Already, Florida, Georgia and other states have enacted new voting laws.

The election overhaul in Texas comes as Republicans seek to hold onto power in a rapidly changing state where people of color make up virtually all of the population growth -- and that growth is concentrated in large cities that tend to vote Democratic.

Democrats had fled the Capitol in Austin for weeks in an effort to stymie the bill -- first preventing the passage of a similar measure at the end of the state's regular legislative session in May, then forcing Abbott to call two special sessions to tackle what the governor called "election integrity."

"It does make it easier and than ever before for anybody to go cast a ballot. It does also, however, make sure it is harder than ever for people to cheat at the ballot box," Abbott said at an event at which he signed the bill into law.

Opponents of Senate Bill 1 said its provisions will disproportionately restrict voting access for marginalized voters -- particularly people of color and those with disabilities.

The new law takes aim at Harris County, the home of Houston, which last year offered drive-thru voting and 24-hour early voting. The bill restricts the hours counties can offer early voting to between 6 a.m. and 10 p.m. And it prohibits tactics like the ones Harris County used in 2020, when a garage at the Toyota Center -- the home of the NBA's Houston Rockets -- was among the venues used as a place residents could vote from their vehicles.

The bill also blocks counties from sending unsolicited mail-in voting applications -- even to those who are over age 65 and therefore qualify automatically to vote by mail. It also places new rules around mail-in voting, increases protections for partisan poll watchers and sets new limits on those who help voters, including those with disabilities, to cast their ballots.

Marc Elias, the leading Democratic elections lawyer, said immediately after Abbott signed the bill that he had filed a lawsuit on behalf of a group of Texas organizations challenging the law, arguing it violates the Voting Rights Act.

The lawsuit says the new Texas law contains provisions "intended to impose a particular burden on Texas's Black and Latino communities -- exacerbating the marginalization caused by more than a century of discriminatory practices."

"SB 1 is an appalling, anti-democracy effort by Texas Republicans to construct barriers to voting for people they believe will not support them," Eric Holder, the US attorney general under then-President Barack Obama, said in a statement. "What makes this bill and similar ones Republicans are pushing across the country even more un-American is that Republicans are using the 'Big Lie' about the 2020 election as a pretext to support them. The reality is that these bills have nothing to do with election integrity or security, but rather are discriminatory measures making it harder for all people to vote. These bills will have a disproportionate impact on communities of color."

In part because Democratic inattention to state-level races has allowed Republicans to build majorities in legislative chambers in many otherwise competitive states, Democrats have proven unable to mount a forceful response this year to the tide of voting restrictions in GOP-led statehouses.

Instead, they are looking to Congress for action. In Texas, state House Democratic lawmakers left Austin and traveled to Washington to urge Congress to approve new voter protections.

However, measures to expand voting rights are stalled on Capitol Hill with Senate Democrats unable to break the 60-vote filibuster threshold -- and unable to eliminate the filibuster, due to opposition within the party.

"I was born in segregation," Democratic state Rep. Garnet Coleman said before Tuesday's House vote to approve the bill. "We think we've made progress, and then all of a sudden there's a new law that moves us back in time."

Republicans in Texas, meanwhile, said their election reforms were aimed at making it easier to vote and harder to cheat -- a refrain GOP lawmakers have used even though there is no evidence of widespread voter fraud in Texas.

"The common-sense reforms in this legislation strengthen our trust in the electoral process, from voter registration through the final tallying of ballots. Texans can cast their votes with confidence knowing that they'll be counted and reported accurately," said Republican state Sen. Bryan Hughes, the provision's author.