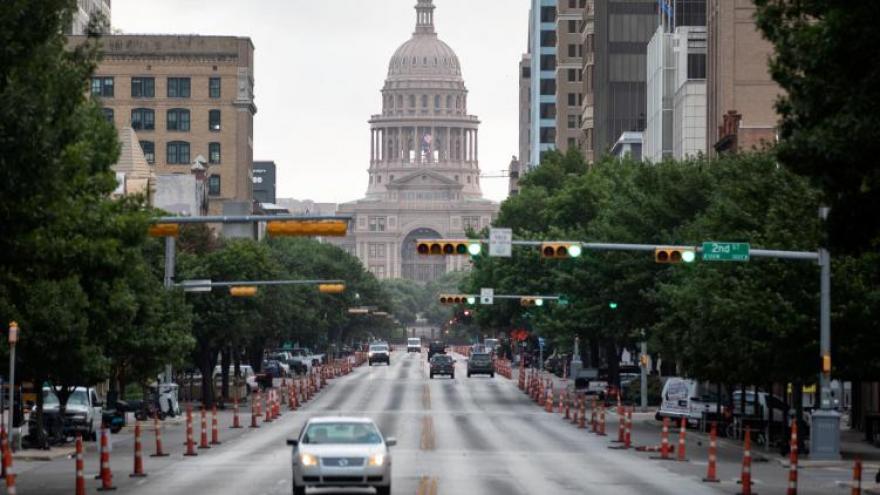 The Texas House is expected to pass the election overhaul bill on Friday. This image shows the Texas Capitol building in Austin, Texas on July 14, 2020.

(CNN) -- The Texas House of Representatives is expected to pass an election overhaul bill Friday that would add new voting restrictions and penalties, the latest effort in a slew of Republican-pushed initiatives nationwide that seek to curtail voting access.

The GOP-led Texas House early Friday morning advanced SB 7 on an 81-64 party-line vote to a third reading vote, roughly nine hours after it was introduced on the floor. There were 18 amendments adopted in an after-midnight session after intense behind-the-scenes negotiations led by Democrats to soften some of the bill's language on criminal penalties.

Voting advocates and Democrats acknowledged to CNN, however, that it is possible the changes could be dropped, because after the bill passes the House, it must go back to the state Senate to reconcile the sharp differences between the two versions before final passage. And the overall effort amounts to additional restrictions and penalties to the voting process out of an ostensible desire to address voter fraud, though no evidence of fraud in the 2020 election in Texas has been presented.

The current House version of the bill does not include some of the Senate version's more controversial provisions, including a ban on drive-through voting and a requirement for an applicant voting by mail on the ground of disability to state they have a sickness or physical condition that prevents them from going to the polls. However, since these measures were included in the Senate-passed version of the bill, they could be added back to a final version if it goes to conference.

Democrats were also able to add amendments that allow for the removal of poll watchers who breach the peace, as well as softening criminal penalties for voters who didn't realize they were ineligible and decriminalizing simple, basic mistakes made by volunteers and election judges.

Other provisions in the Senate version, which passed last month, would limit extended early voting hours and give partisan poll watchers broader authority when observing at a polling location, including being allowed to record a voter who receives assistance while filing out their ballot.

"Under cover of darkness, the Texas House just passed one of the worst anti-voting bills in the country," Sarah Labowitz, policy and advocacy director of the ACLU of Texas, said in a statement. "SB 7 will target voters of color, voters with disabilities and the civil servants who run our elections. Lawmakers advanced the bill with little debate or public input. They know the bill is designed to suppress the vote by making voting harder and allowing poll watchers to intimidate voters. Texans deserve better than to wake up and find out that lawmakers jammed through a law that will make participating in our democracy harder and scarier."

The Texas bill is just one of several Republican-backed legislation nationwide that restrict access to the ballot and place new voting limits following former President Donald Trump's baseless claims of fraud in the 2020 election. Florida Republican Gov. Ron DeSantis on Thursday morning signed into law a controversial voting bill aimed at curbing access to mail-in voting in the state, and other Republican-controlled legislatures are charging forward with a raft of new state laws imposing limits on voting.