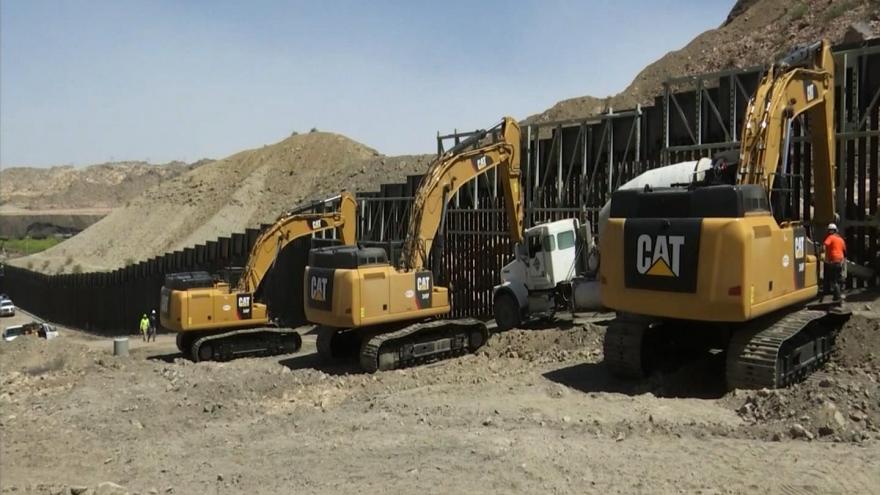 A Texas judge has temporarily halted the construction of a private wall along the US-Mexico border, delivering a blow to the group that has ardently supported the President Donald Trump's push for additional border barriers.

(CNN) -- A Texas judge has temporarily halted the construction of a private wall along the US-Mexico border, delivering a blow to the group that has ardently supported the President Donald Trump's push for additional border barriers.

We Build the Wall, a group founded by an Air Force veteran, kicked off new construction on the Texas border last month in an attempt to showcase its barrier designs and shore up support for Trump's signature issue.

The National Butterfly Center, a 100-acre wild butterfly habitat near the project's location, argued the new construction was "illegal," and asked the court to intervene.

On Tuesday, State District Judge Keno Vasquez, of Hidalgo County, issued a temporary restraining order, halting construction of the wall for the time being.

In the order, Vasquez ruled the National Butterfly Center could face "imminent and irreparable harm" if construction were to proceed.

Javier Peña, a lawyer for the center, said the center felt compelled to take legal action because of the "hateful rhetoric" used by We Build the Wall and the destruction the barriers could cause.

When asked about the order, Kolfage told CNN Tuesday, "More fake news. We haven't heard anything. We have not been served."

The International Boundary and Water Commission, which oversees boundary and water treaties between the US and Mexico, has also previously raised concerns with the project. The commission asked the group to provide additional details about construction and halt the use of motorized vehicles on the levee.

This is not the first We Build the Wall presence in the border. In May, the group, which had raised millions of dollars in a GoFundMe campaign, broke ground on a stretch of wall on private property in New Mexico.

Similar to the New Mexico project, the group is building on private land in the Rio Grande Valley region in Texas, a strategy that shields it from government intervention. It's also using the same contractor: Fisher Industries, a company that's captured Trump's attention.

Earlier this week, Fisher, a company that's also been touted by White House officials, was awarded $400 million by the government to design and build part of Trump's border barrier in Yuma County, Arizona.

A number of the President's supporters are part of We Build The Wall, including Steve Bannon and Kris Kobach.

The Pentagon on Monday announced that North Dakota company Fisher was awarded a contract to "design-build border infrastructure along the southern perimeter of the Cabeza Prieta National Wildlife Refuge" in Arizona by the end of 2020. The company had previously been approved by the Pentagon as an eligible vendor for wall projects.

So far, Customs and Border Protection has updated roughly 86 miles of existing barrier, swapping out old, dilapidated designs with a newer system. Construction is also underway in areas where there was previously no barrier.

The administration says it intends to complete 450 miles by the end of 2020.