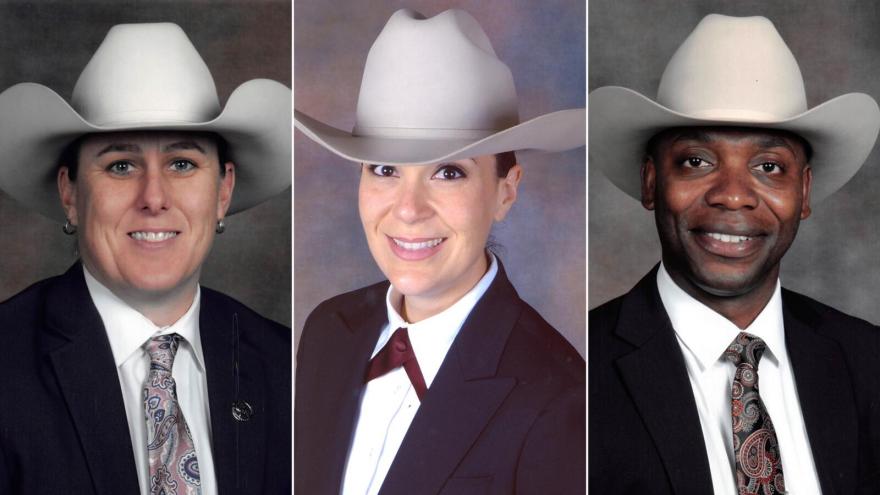 These Texas Rangers are making history with three landmark promotions announced on Tuesday.

After nearly 200 years, the Texas Department of Public Safety promoted their first female captains, Rangers Wende Wakeman and Melba Saenz. Ranger James Thomas was also promoted to the rank of captain, making him the first known Ranger in modern history to hold a doctorate degree, according officials.

"These three talented, dedicated professionals have excelled in positions throughout their DPS careers and have exhibited tremendous commitment to the people of Texas and our law enforcement partners," DPS Director Steven McCraw said in a press release on Tuesday. "I have the utmost confidence they will continue to make the department proud in their new roles within the Rangers."

All three trailblazing captains held the rank of lieutenant before their promotions. Thomas and Wakeman will officially become captains on September 1 and will be stationed in Austin. Saenz was promoted on May 15 and is on duty in Edinburg.

The Texas Rangers, an elite law enforcement division in the state, consists of nearly 170 Rangers. The group specializes in investigating some of the state's major crime incidents including, officer-involved shootings, crimes against children, border security and public corruption.

Wakeman first made Ranger history in 2014, when she became the first woman to be promoted to the rank of lieutenant. She joined the Texas DPS 22 years ago and served as a highway patrol officer and narcotics sergeant before joining the Rangers. In Austin, she will be tasked with overseeing specialized law enforcement teams within the Rangers.

Saenz started off her law enforcement career as a police officer in Mission, Texas. She also served as a highway patrol officer for the Texas DPS. In 2008, she joined the ranks of the Rangers. Saenz was recognized by the FBI for her work on a case involving the aggravated kidnapping and recovery of a 5-year-old child, according to the DPS. As captain, the DPS says Saenz now manages six Joint Operations Intelligence Centers from El Paso to the Rio Grande Valley and continues to manage the field operations for the Drawbridge Program.

Throughout Thomas's lustrous career, he served as a highway patrol officer, special agent within the Criminal Investigations Division's gang unit, and was appointed a Special Deputy US Marshal before joining the Rangers. He earned a bachelor's degree in criminal justice from Lamar University, a master's degree in behavioral science from the University of Houston-Clear Lake and a doctoral degree in educational leadership from Lamar University, according to the DPS.Thomas will now supervise the Sexual Assault Kid Initiative and Forensic Artists program in Austin.