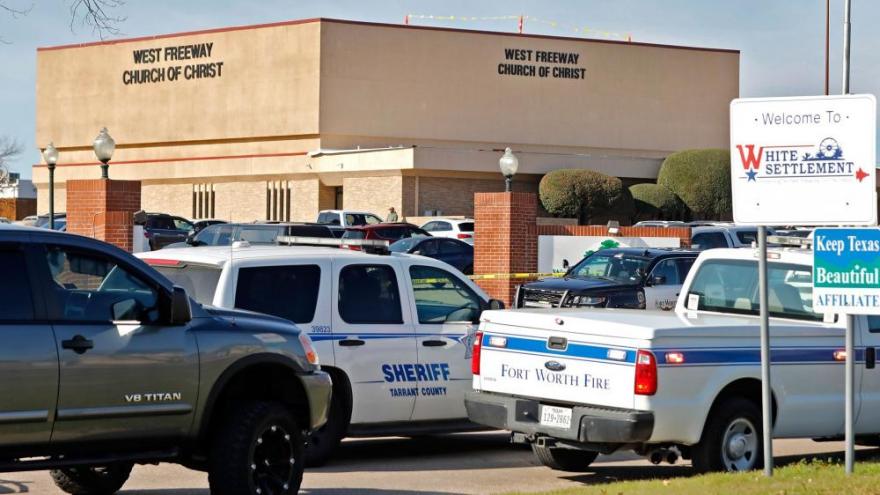 Two parishioners were killed when a gunman opened fire in a Texas church Sunday. Within seconds, members of the church security team shot and killed the suspect.

(CNN) -- The senior minister at West Freeway Church of Christ said Monday he knew the gunman who killed two people inside the sanctuary Sunday.

Britt Farmer spoke at a community vigil outside of his church in White Settlement on Monday night. He honored both victims, Anton "Tony" Wallace and Richard White, whom he called his best friend. The congregation held a private worship service inside the sanctuary to pray for their fallen church members.

Farmer discussed ministering to the gunman, Keith Thomas Kinnunen, on more than one occasion, even stating the 43-year-old had visited his church in the past.

"I had seen him. I had visited with him. I had given him food. I had offered him food at other occasions that he had been to our building," Farmer said.

"Quickly after this tragedy, there were people from this community who went into action to aid us, the West Freeway Church of Christ," Farmer said. "We want to express our deepest thanks to you for your love, your prayers and support."

Farmer also urged people to pray for the victims' families and the family of the shooter.

"We also ask that you pray for the perpetrator's family and those who may have been affected by his loss. Our hearts are not lost in that as well," he said. "We want this community to know that we're strong, but we want to be strong for them and all those who come into our midst that we can wrap our arms of love around them."

Funds have been set up to help with funeral costs and meals for the victims' families, Farmer said.

One of the victims was a deacon of the church

Wallace, 64, was from Fort Worth and White, 67, was from River Oaks, according to a statement released by the Texas Department of Public Safety.

Wallace was a deacon and longtime congregant of the church.

"He always wanted us to be in the church, he was always my role model," Wallace's daughter, Sarah Wallace, told CNN. "We just say God wanted him more than we did. They couldn't handle his perfectness here."

The men were two of multiple members of the church security team who responded to the gunman. However, Paxton said the head of security, Jack Wilson, was the only person who shot at Kinnunen, and he fired just once. The shot killed the gunman.

Along with being the head of security, Wilson is a former reserve deputy sheriff who is a firearms instructor, Paxton said.

"My understanding is, he was a reserve deputy and had significant training, had his own shooting range, had taught other people how to shoot, had taught many people in this church how to be prepared," Paxton told reporters at a news conference. "He's not just responsible for his actions, which ultimately saved the lives of maybe hundreds of people, but he's also responsible for training hundreds in that church."

Wilson, who is head of security at the church, posted a statement online thanking "all who have sent their prayers and comments on the events of today.

"The events at West Freeway Church of Christ put me in a position that I would hope no one would have to be in, but evil exists and I had to take out an active shooter in church," he said. "I am very sad in the loss of two dear friends and brothers in CHRIST, but evil does exist in this world and I and other members are not going to allow evil to succeed."

Gunman had been homeless

Kinnunen, the gunman, was 43 and lived on the streets for a time, according to his sister, Amy Kinnunen.

Kinnunen had several arrests and convictions over the past decade. Fort Worth police arrested him in 2008 and charged him with felony aggravated assault with a deadly weapon, according to Department of Public Safety court records. The charge was later lowered to misdemeanor deadly conduct, and he was convicted in 2009, the records show.

In December 2013, Fort Worth police arrested Kinnunen for misdemeanor theft and he was convicted in January 2014, the records show.

Amy Kinnunen said both Keith and their younger brother, Joel, had lived on the streets. Joel took his own life in 2009 and Sunday was his birthday, she said. She told CNN she last spoke to Keith in November.

Sonia Hernandez, a former family acquaintance of Kinnunen, told CNN his brother's death was "the most traumatic thing" for him. Hernandez said Kinnunen was previously married to her sister-in-law. She last spoke to him about a decade ago but spent time with him between 2003 and 2008 and says she got to know him well.

"He had a hard childhood," Hernandez said. "Even when something started to go well for him, something would end up destroying that ... He had what some might call demons."

Amy Kinnunen said Keith was bouncing between the homes of friends, though White Settlement is where he most recently lived. She described him as religious and said she didn't believe the shooting was a political act or one of revenge.

"Any problem that you had, he could give you a Bible scripture. He was very close to the Lord. I believe that is why he chose the church," she said.

Officials said the gunman had been arrested multiple times in different municipalities.

"The shooter is relatively transient but has roots to this area," Matthew DeSarno, special agent in charge of the FBI Dallas office, told reporters Sunday night. He added the shooter was not on any sort of watch list.

Paxton said it was his understanding the gunman was "more of a loner." He had been to the church several times before and was welcomed in, the attorney general said. Paxton said the gunman's death made it even more difficult to determine his motivations.

White Settlement police Chief J.P. Bevering said the shooter entered the church and sat down in the sanctuary just before 11 a.m. Sunday. He then stood, pulled out a shotgun and shot two people, Bevering said.

A video livestreamed from the church, seen by CNN, appears to show the shooting from start to finish. Lisa Farmer, the wife of the West Freeway Church of Christ Minister Britt Farmer, was not inside the church at the time of the shooting but told CNN the video shows the inside of the church building.

The shooter can be seen in the video seated in a pew wearing dark clothing before he gets up and approaches someone in a back corner and appears to talk to them. The individual gestures towards the center of the church before the shooter pulls out a shotgun and starts firing. As gunfire ensues, some parishioners are seen taking cover under their pews while others rush out of the sanctuary.

Another man with a handgun is seen in the video immediately engaging with the shooter and taking him down. Once the shooter is subdued, several other parishioners are seen approaching with their weapons drawn.

Farmer told CNN the shooting happened at the start of communion. "It was so chaotic," she said.

The church normally has around 280 people attending Sunday services, Farmer said. She said one of the men who died was a close friend "who would do anything for anybody that he could. Good guy. He's been there for us through thick and thin."

Isabel Arreola, who was sitting a few rows ahead of the shooter in the church, told CNN affiliate KTVT that when she saw him she knew "something's not right."

She told KTVT the shooter's appearance bothered her so much she pointed it out to her husband. "I told him I don't feel comfortable. I feel he's like dressed in like a beard and that's a wig. ... It looks so fake. ... I just kind of kept looking back there," she said.

"I saw him pull the gun out and I was just panicked and then we heard it go off and we're just screaming, you know, trying to get under the pews," Arreola told the affiliate.

Church security took down the gunman

"This team responded quickly and within six seconds the shooting was over," Texas Lt. Gov. Dan Patrick told reporters at a Sunday night news conference. "Two of the parishioners who are volunteers on the security force drew their weapons and took out the killer immediately, saving untold number of lives."

"The citizens who were inside that church undoubtedly saved 242 other parishioners," Regional Director of Texas Department of Public Safety Jeoff Williams told reporters Sunday night.

He also said that no ideology or motivation for the shooting has been determined.

Church members told KTVT the security team started about a year ago. Patrick said a law passed recently allows churches to develop, train and plan for their own teams to provide security.

Patrick spoke about another Texas law that took effect in September that makes it legal for people to have guns in houses of worship.

Both laws were passed after a shooting at a church in Sutherland Springs, Texas, left 26 people dead in 2017.