The 7-year-old daughter of a Miami firefighter is among the Surfside, Florida, building collapse victims 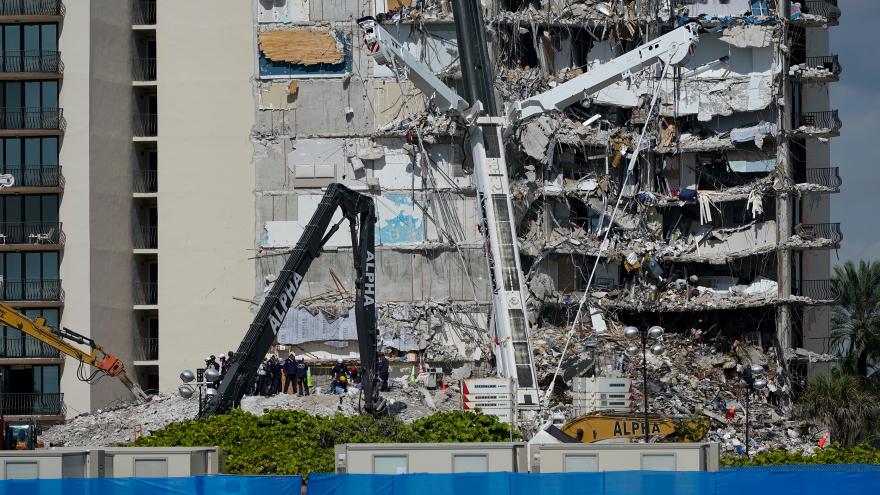 The daughter of a member of the City of Miami Fire-Rescue was recovered from the rubble Thursday night. She is 7-year-old. - Mark Humphrey/AP

(CNN) -- A member of the City of Miami Fire-Rescue has lost his 7-year-old daughter in the Surfside, Florida, building collapse, officials said Friday.

The girl's remains were recovered Thursday night in the rubble by members of the department's urban search and rescue team, Chief Joseph Zahralban said in a statement.

The chief asked for privacy for the family and the fire department "while we grieve our loss and support our own." The girl will not be publicly identified at the request of the family, the Miami-Dade Police Department said Friday.

Miami-Dade County Fire Chief Alan Cominsky said the firefighter was not part of that rescue process. His task force comrades found the remains and then called him over, Cominsky told reporters.

"When we come across an individual, you know, obviously we pay our respect, we have a process. I'm not going to go into details, but with different religious faiths, we have a process that we started from the very, very beginning, and we comply with that," Cominsky said.

"I want to emphasize ... we do that. We honor all the loved ones that we've lost," said Cominsky.

The death toll in last week's collapse in the Florida city was 22 as of Friday evening. The bodies of two other children, ages 4 and 10, have been previously recovered at the site.

"It goes without saying that every night since this last Wednesday has been immensely difficult for everybody and particularly the families that have been impacted, but last night was uniquely different," said Cava.

"It was truly different, different and more difficult for our first responders," the mayor said at a Friday briefing.