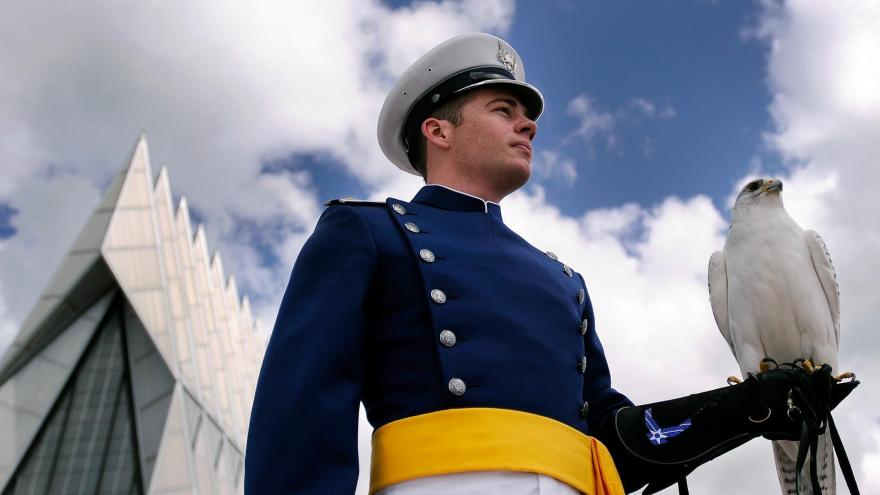 (CNN) -- Aurora, a falcon that served the Air Force Academy as mascot for 23 years, has died, the school announced Wednesday in a statement posted on Facebook and Twitter.

The bird was a fixture at Air Force Academy sporting events as well as military and community events.

"She was a beautiful falcon who greatly impressed all who saw her," the academy said. "We will especially remember the look of sheer delight on the faces of young kids who had the chance to pet her."

Aurora was a white phase gyrfalcon, a rare type of a rare species. Only 3% of all falcons are gyrfalcons, and only 1% of gyrfalcons are white, the academy said.

The gyrfalcon is a formidable predator and is the world's largest falcon type, according to the National Audubon Society.

The Air Force Academy's first class, which began courses in 1955, chose the falcon as a mascot, as they felt the species channeled the Air Force's fighting spirit.

The first mascot, a peregrine falcon, was named Mach 1, referencing the speed of sound.

Other mascots to serve the school were named named Atholl and Baffin.

The latter bird lived to the age of 13 and was named for Baffin Island, where she was "captured with the permission of the Canadian government," the school says.

A successor, Glacier, served the school from 1980 to 1995, becoming the longest-serving mascot up to that point.

But then Aurora, who was acquired by the academy as a gift from the Association of Graduates, served the school for 23 years.

Aurora was a "feisty, spirited bird who commanded respect," the school said. "We all feel her loss deeply."