The American bumblebee is at risk of extinction in Canada, scientists say 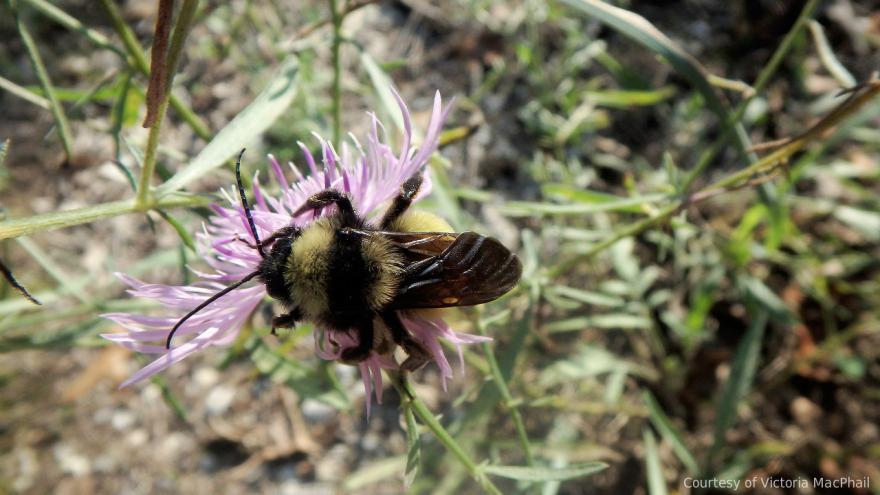 (CNN) -- The American bumblebee is in trouble in America's neighbor to the north.

A group of scientists from York University and University of Vermont looked at three different measurements and found that Bombus pensylvanicus, commonly known as the American bumblebee, is declining in Canada.

The number of areas where the American bumblebee can be found in the country decreased by 70% from historical rates, according to the study.

Compared to other species of bumblebee, American bumblebees have decreased in abundance in Canada by 89%. And their extent of occurrence, commonly considered to be its range, decreased by 37%. The report says the bee should be assessed as critically endangered.

"(The occurrence) is much more patchy and isolated than previously," says Victoria MacPhail, a PhD student at York University and the lead author on the study.

The researchers compiled information from three separate sources: the Bumble Bees of North America (BBNA) database, records from the Bumble Bee Watch citizen science program verified by experts, and their own field surveys. They then compared historic data from 1907 to 2006 to numbers from 2007 to 2016.

The study is just the latest evidence that bee populations are declining in North America and other parts of the world.

"Bees are in serious trouble," the Center for Biological Diversity said in 2017. "Native bees indispensable to the health of the natural world are declining globally due to accelerating threats from agricultural expansion, habitat loss and climate change."

These particular American bumblebees are considered a keystone species and are critical for the functioning of ecosystems where they live.

"They're very good pollinators from spring through fall. To lose them could have an impact on the environment," MacPhail said.

"Losing one species could cause a decrease in plant reproduction and plant yield."

The researchers decided to conduct the study after other research found the American bumblebee is on the decline in parts of the United States. They wanted to know whether the same was happening in Canada, MacPhail told CNN.

The International Union for Conservation of Nature (IUCN) categorizes the American bumblebee as vulnerable, which means the species is considered to be at high risk of unnatural (human-caused) extinction.

MacPhail wants the Canadian government to take action to protect the bees. Scientists are worried that if they wait too long the bumblebee will go extinct, she said.

Scientists don't yet know exactly what is causing the bees to decline, MacPhail said, though she cited several likely threats, including habitat loss, diseases, climate change and competition with non-native species.