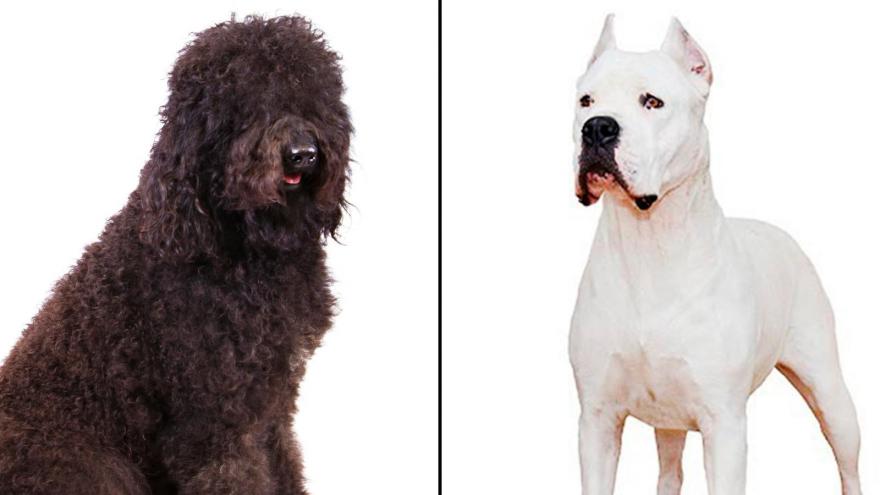 The barbet, left, and dogo Argentino, right, are the two new breeds recognized by the American Kennel Club.

(CNN) -- This decade is off to a paws-itive start, with the recognition of two new dog breeds by the American Kennel Club.

The AKC, the world's largest purebred dog registry, announced Tuesday that the barbet and dogo Argentino are joining the list of its recognized breeds.

The barbet (pronounced "bar-BAY") is a water dog from France and joins the "sporting" group, according to the AKC. It's a smart and friendly dog with, most importantly, a soft, curly coat perfect for maximum petting and snuggling.

"The Barbet is loyal and loves to be near its owners," wrote the AKC online.

The dogo Argentino is a slightly different vibe. A hunting dog developed in Argentina, hence its name, the dog was originally developed to hunt large animals such as boars and mountain lions, according to the AKC. It's classified in the "working" group.

"Dogos are confident, courageous, loyal and affectionate with their family," the AKC says of the breed.

But, the organization warns, they aren't for the new dog owner because of their "strong guarding instincts" and territorial tendencies.

Described as "powerful and athletic," the breed is perfect for the exercise-holics among us, as they require lots of daily exercise and interaction with people.

They also require a bit of maintenance -- their short, white coat needs a weekly brushing, the AKC says.

For a breed to be recognized by the AKC, there must be a minimum of 300 to 400 dogs from the breed in at least 20 states, the group writes. There must also be an established breed club, consisting of owners and breeders, behind the dog.

The dog breed can then be eligible to compete in the Miscellaneous Class, where dogs typically spend upwards of three years. From there, the breed can get recognized officially, which means it's eligible to participate in AKC events and affiliated clubs.

With the addition of the barbet and dogo Argentino, the AKC has 195 recognized breeds.