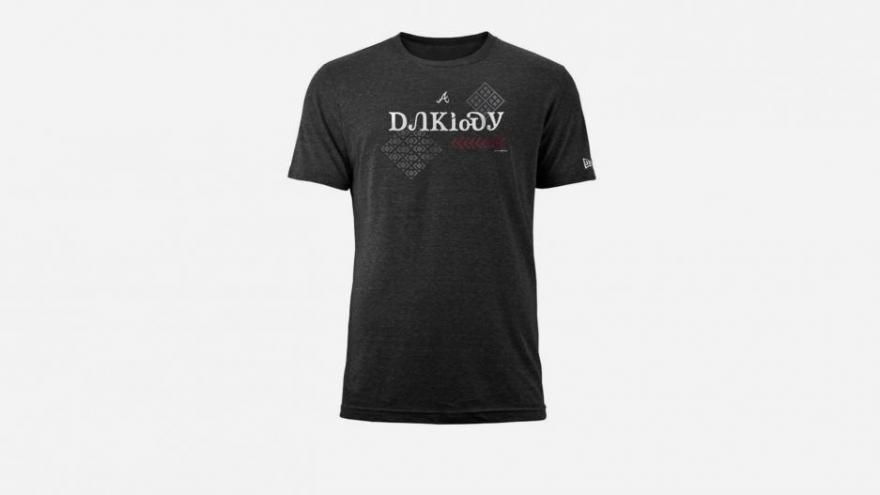 The Atlanta Braves and the Eastern Band of Cherokee Indians collaborated on the shirt.

(CNN) -- Professional sports teams have long been scrutinized for their use of Native American culture and imagery. In response to renewed discussions about these issues, the Atlanta Braves are launching a new effort to help preserve the native Cherokee language.

The franchise will be selling a T-shirt to bring awareness to the Cherokee written language system, Syllabary. The gray shirt's design features the Atlanta "A" logo and the word "??????," meaning "ball player" in Syllabary.

The Braves organization designed the t-shirt with the Eastern Band of the Cherokee Indians (EBCI). A portion of the proceeds from each of the $30 shirts will benefit the New Kituwah Academy and the Cherokee Speakers Council, said Laura Blythe, program director for the Cherokee Historical Association and member of the ball club's 3-person cultural committee, in an interview with CNN.

"I want to sell as many as we can because the proceeds go back to something that we hold very dear," Blythe told CNN. "There are so many Native tribes that have been completely wiped out, that have lost their languages, and that is one of the key factors that make you an indigenous tribe."

Blythe says she wants more people to be aware of the existence of Syllabary.

"A lot of people think that all Native American cultures are the same," Blythe said. "But with this shirt, it spotlights our own culture, our own heritage. A lot of people don't recognize Cherokee Syllabary when it's written. We want to spotlight who we are as Cherokee people. And I think that if we're able to touch a few hearts with our story, then that's a success right there."

In July, the Atlanta Braves released "We're Still Here," a campaign to recognize their longstanding relationship with the EBCI. The EBCI's Principal Chief, Richard G. Sneed said in an interview that the team reached out this year about wanting to strengthen that relationship more.

Despite the moves to strengthen ties between Native American leaders and the team, the Atlanta Braves still plan to keep their name. Other major teams, however, have taken the plunge. Cleveland's MLB team recently announced it plans to drop "Indians" from its name. The decision comes after previously removing the "Indian" logo from its on-field team uniforms in 2019. The NFL's Washington Football Team changed its name from the "Redskins" earlier this year.

After Cleveland announced its plans for a name change, Georgia GOP Senators David Perdue and Kelly Loeffler released a joint statement saying they "adamantly oppose any effort to rename the Atlanta Braves." However, that conversation was never on the table.

"Changing the name of the Braves is not under consideration or deemed necessary," leaders of the Braves franchise reportedly said in conversations with Native American and tribal leaders. "We have great respect and reverence for our name and the Native American communities that have held meaningful relationships with us do as well. We will always be the Atlanta Braves."

The baseball team, which was originally based in Boston, adopted the name the "Braves" in 1912. Its then owner James Gaffney was affiliated with the Democratic Party's Tammany Hall, which had an Indian headdress as part of its emblem. The Braves also adopted a tomahawk logo in 1991, with fans performing a "tomahawk chop," complete with chants and a foam cutout.

St. Louis Cardinals pitcher Ryan Helsley, a member of the Cherokee Nation, said during the 2019 playoffs said that the tomahawk chop is "a misrepresentation of the Cherokee people or Native Americans in general." Chiefs of tribal nations that once inhabited Georgia have also flagged the practice as inappropriate.

The team announced in a statement in July that the tomahawk chop is currently under review by its advisory committee.