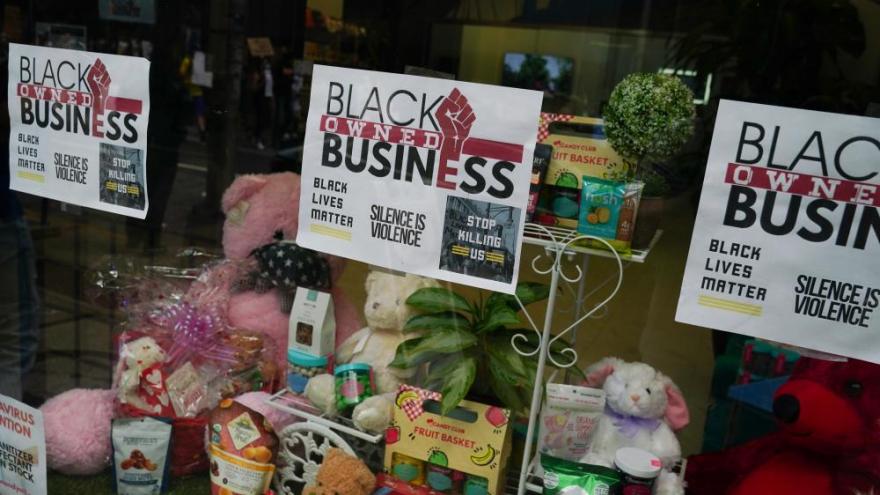 Many black-owned small businesses are especially vulnerable now due to the effects of the pandemic, recession and vandalism.

In mid-March, she shuttered her store, Détroit is the New Black, and sent home her five employees, believing she might never reopen.

"Then, came Black Lives Matter," she said, and a rush of sales as customers raced to support Black businesses following the coast-to-coast uprising over the death of an unarmed Black man, George Floyd, under the knee of a Minneapolis police officer.

The national reckoning on race triggered by Floyd's death -- and Covid-19's disproportionate toll on people of color -- has brought fresh attention and new business to Black companies and causes. Major corporate brands have signaled their support for the Black Lives Matter movement. Ice cream maker Ben & Jerry's called for Americans to "dismantle white supremacy." Bank of America has pledged $1 billion over four years to address racial and economic inequality. Quaker Oats decided to retire its 131-year-old Aunt Jemima brand. NASCAR banned the Confederate flag from its events and properties.

On a smaller scale, social-media influencers have turned over their Instagram accounts to Black business owners. Google sheets of restaurants and shops owned by African Americans abound online.

"We're in the middle of a strong watershed moment," said Americus Reed, a marketing professor at the University of Pennsylvania's Wharton School. "It seems like everyone is unambiguously saying, 'Here's where I stand. Here's where my company stands. Here's my plan to support the Black community and Black Lives Matter and social justice.' "

But for small, Black-owned businesses -- already hard-hit by the pandemic -- this new world poses challenges of its own. And some fear any business gains from this moment of public soul-searching over racism could prove ephemeral if the country -- and customers -- move on.

While Karamoko is grateful for the new interest, she no longer has employees to help her fill orders and juggle customer-service questions. In addition, the social-distancing requirements imposed by the pandemic have slowed production at the printing companies that help produce her trademark "Détroit is the New Black" t-shirts and totes.

"Logistically it's kind of a mess," she said. "I'm overwhelmed. I don't mean to sound like it (the increased business) is a bad thing. But it highlights the fragility of a lot of our businesses."

And Karamoko and other business owners say they also worry about misjudging this moment and expanding too quickly. "Where is the line between white guilt and building a sustainable business model?" she asked. "Can you accurately project your business based on this surge?"

At Mahogany Books, a Black-owned bookstore in the nation's capital, business is booming with online orders for titles such as "How to be an Antiracist" by historian Ibram X. Kendi and "Between the World and Me" by journalist Ta-Nehisi Coates.

(The store's recent online event with Kendi reading from his new board book for young children, "Antiracist Baby," drew participants from Brooklyn to Boise, Idaho, and dozens of questions about how to talk to children about racism.)

Co-owner Derrick Young plans to roughly triple his normal staff to meet the growing demand but says the staff build-up may be temporary.

"That's definitely a question for us: How to scale up without over-extending ourselves?"

Of the 5.7 million US firms with paid employees, about 124,000 -- or a little more than 2% -- were Black-owned in 2017, according to a Brookings Institution analysis of the Census Bureau's most recent survey of US businesses.

Some of the largest sectors for Black-owned companies -- health care and retail -- also have been among the hardest hit by the pandemic. And Black-owned businesses have had a harder time receiving federal Covid-19 relief, including the Paycheck Protection Program. The program, intended to help struggling small firms retain and rehire employees, makes forgivable loans through banks to small business owners.

"Some people just weren't able to qualify," said Regina Smith, executive director of the Harlem Business Alliance in New York City. "The big banks were going to cater to their clients, and we don't have those kinds of relationships. It's been a mess all the way around."

Black businesses, Smith said, need specific policies to ensure their long-term survival and growth. In Harlem, where gentrification has sent rents soaring, she wants developers of residential buildings to set aside ground-floor commercial space for businesses owned by African Americans.

"It's important that our youth see Black-owned businesses in the communities where they live," she said. "We're not going to have social justice in this country, if we don't have economic justice."

Across the country in Austin, Texas, jewelry designer Sheila Hawkins-Bucklew said she didn't qualify for any Covid-19 federal aid. And because she has not fallen behind on rent for her shuttered storefront, she also doesn't qualify for assistance from a local program established to help people in the city's "creative" sector with rent payments.

Hawkins-Bucklew did see a surge in online interest in her jewelry-design business in early June after local news reports and another business owner highlighted her firm among the city's Black-owned companies.

"It's wonderful that people want to do something and that awareness has been brought to the fact that we have businesses that we want to scale up," Hawkins-Bucklew said. "But it can't just be a one-time thing because something awful happened and people realized, 'Yes, racism is still alive and well.' "