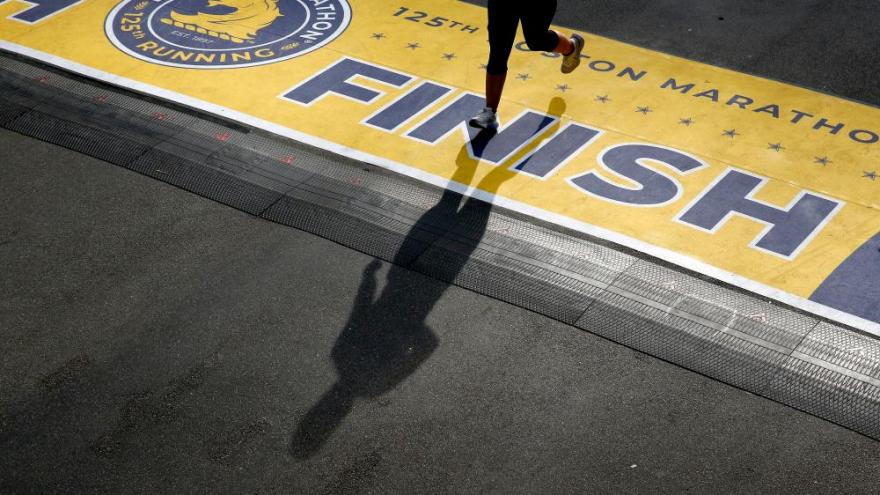 A runner casts a shadow as she crosses the finish line of the 125th Boston Marathon in Boston in October. This year, the Boston Marathon will ban runners from Russia and Belarus.

(CNN) -- Despite qualifying, runners living in Russia or Belarus are banned from participating in this year's Boston Marathon and Boston Athletic Association 5K, according to organizers.

The ban affects 63 athletes who signed up for either one or both races, BAA spokesperson Kendra Butters told CNN.

The 126th Boston Marathon is scheduled for April 18 this year with 30,000 participants.

"Like so many around the world, we are horrified and outraged by what we have seen and learned from the reporting in Ukraine," president & CEO of the BAA, Tom Grilk said, in a news release. "We believe that running is a global sport, and as such, we must do what we can to show our support to the people of Ukraine."

After the invasion of Ukraine, sports teams from Russia and Belarus have been banned entirely from competition in sports like football, Formula One, tennis, gymnastics and more.

Sports bans are just one of many sanctions the US, along with its allies, have placed on Russia in an attempt to impose costs on the country for its invasion and eventually cut off critical economic sectors.

A new sanctions package will ban all new investment in Russia, increase sanctions on financial institutions and state-owned enterprises in Russia, and sanction Russian government officials and their family members.

The Boston Marathon will let Russian or Belarusian athletes who are not residents of those countries compete in the races, but they can't run under their flag, according to the release.

The BAA said they will "make reasonable attempts" to refund the athletes from Russia or Belarus who will no longer be able to participate and will refund Ukrainians who are registered and unable to attend, or give them an option to defer to a future year.

The entry fee for qualifiers is $205 for US residents and $255 for international residents, according to the race website.