The Columbus, Ohio, officer who killed Andre Hill has been fired 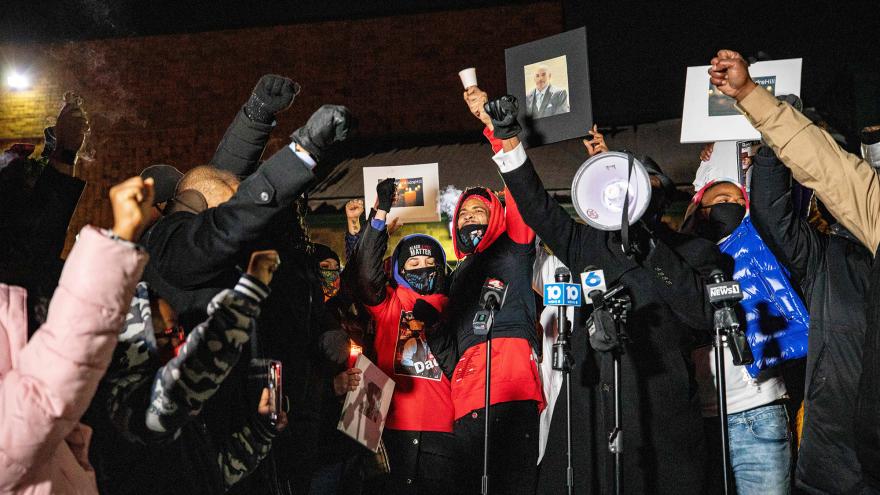 Coy's termination follows a disciplinary hearing held earlier in the day. The local chapter of the Fraternal Order of Police represented him at the hearing.

"The information, evidence and representations made by Chief (Thomas) Quinlan as the investigator are, in my opinion, indisputable. His disciplinary recommendation is well-supported and appropriate," Pettus said. "The actions of Adam Coy do not live up to the oath of a Columbus Police officer, or the standards we, and the community, demand of our officers."

Coy fatally shot Hill, who was Black, last Tuesday within seconds of their encounter, as Hill walked toward Coy holding an illuminated cell phone in his left hand, body camera footage shows. Hill was unarmed.

Quinlan had recommended firing Coy. Quinlan said in a statement Monday the evidence against Coy provided "solid rationale" for termination.

"This is what accountability looks like," Quinlan said, adding that Coy will now have to answer to state investigators regarding Hill's death.

CNN left a message for the Fraternal Order of Police on Monday but did not receive a response.

Coy didn't attend Monday's hearing but was represented by his union. His union representatives noted the city served Coy's attorney, who's on vacation, after 5 p.m. on Christmas Eve, before a holiday weekend, for a Monday morning hearing.

They wanted to preserve "all contractual and just-cause arguments" because the lawyer was not available.

Quinlan sought Coy's firing because he said Coy shot Hill and didn't activate his body-worn camera when he responded to the call or render aid after shooting Hill. Coy turned his camera on after the shooting, and the camera's look-back feature captured the 60 seconds prior to Coy turning it on.

"Known facts do not establish that this use of deadly force was objectively reasonable. You failed to de-escalate, and failed to render aid," Pettus wrote in his ruling.

Pettus said the actions of Coy and other officers officers who were at the scene will continue to be investigated and use of body-worn cameras and duty to render aid will be among actions under further review. Police have released only Coy's camera footage.

"Because of the potential for those cases to come before me, and to protect the integrity and impartiality of that process and any future ruling, it is not appropriate for me to comment further," Pettus said.

"Now we wait on the investigation of BCI, a presentation of the evidence to a grand jury and potential federal charges from the U.S. Department of Justice. We expect transparency, accountability and justice. The family and the entire community deserve it," Ginther said.

Coy has not been charged.

Hill's family and attorney Ben Crump, in a statement, said it was "the correct decision" to fire Coy.

"We look forward to reviewing all the bodycam footage and determining everything that happened leading to Andre Hill's death," the statement read.

Monday's hearing dealt only with potential discipline of the officer based on the police chief's recommendation that Coy be fired. The hearing was not open to the public. The officer can appeal his firing.

Coy shot Hill after responding to a non-emergency disturbance call last week. Coy's failure to activate his camera as he got out of his car and approached Hill is one reason Quinlan sought his firing.

The department's rules state "sworn personnel shall activate (body-worn cameras) at the start of an enforcement action," which includes any call for service or self-initiated activity, according to a memo written by Quinlan.

The video shows Coy walking toward an unlit garage before he turns on a flashlight, illuminating Hill and much of the garage.

The body camera footage appears to show Coy walking toward Hill as Hill walks toward the officer. Coy started shooting within a few seconds of seeing Hill. It's not clear whether Hill or Coy said anything during their brief interaction because Coy didn't turn on his camera until after the shooting.

The first few seconds of Coy's body camera video in which audio is available shows Coy ordering Hill to get his hands out to the side, ordering him to get on his stomach, warning an officer to not get close because one of Hill's arms is under the car where he collapsed.

About 37 seconds after the shooting, Coy asked whether a medic was coming.

The department's use-of-force directive also requires officers who've used deadly force to "cause any needed medical aid to be rendered" after an incident, and Quinlan's memo stated "Officer Coy failed to provide medical aid or ensure others did so."

In the memo, Quinlan stated he responded to the scene of the shooting and reviewed footage on scene. After that, he ordered Coy relieved of duty and Coy surrendered his badge and gun. Quinlan stripped him of police authority and interviewed another officer who witnessed the shooting.

Days after the shooting, Quinlan said he had seen "everything" he needs to seek Coy's firing.

"Some may call this a rush to judgment. It is not. We have an officer who violated his oath to comply with rules and policies of the Columbus Division of Police and the consequences of that violations are so great it requires immediate termination," Quinlan said in a video posted to Facebook. "This violation cost an innocent man his life."

"There's video that the family understands exists, that after seven minutes of him laying motionless on the ground, they did put him in handcuffs," Crump said. "So we're demanding that the other police bodycam video be released so the world can see that they continued to show disrespect to unarmed Black people."

Columbus police released 13 minutes of footage from Coy's body camera last week. The footage shows a group of officers approaching Hill, who's lying on the ground, about seven minutes after the shooting, but because Coy was pacing around the scene and police haven't released additional video, it's not clear when Hill was handcuffed.

Hill's family has raised concerns about Hill being handcuffed and asked for other video evidence to be released.

Hill's death came as residents and activists are reeling from the shooting death of Casey Goodson Jr. by a county sheriff's deputy earlier this month. The Black community's relationship with Columbus police has long been strained, residents say, and demonstrators rallied after the deaths of Goodson and Hill demanding more accountability for police.

Barnett expressed her outrage toward Columbus police officers' alleged conduct after her brother was shot.

Karissa Hill told CNN's Alisyn Camerota that her 6-year-old son, who knew Hill and referred to him as "Big Daddy" -- saw the video on the news on his own.

"My son just said that he prays to God that Big Daddy gets off the floor and comes home," she said.

The shooting deaths of Goodson and Hill are now part of separate federal civil rights investigations. The cases grabbed national headlines and were heavily criticized by activists, local residents and some city leaders who have asked for more accountability.

In a joint statement released Monday, the People's Justice Project, Black Abolitionist Collective of Ohio and Central Ohio Freedom Fund said Hill was "murdered for just being Black" and called for Coy to be charged and convicted of murder.

The Franklin County coroner's office Monday announced preliminary findings of its autopsy, saying Hill's death was a homicide by multiple gunshot wounds. That designation does not reflect whether the shooting followed city policy or legal under state law -- only that Hill's death was caused by another person, which is not in dispute. A full autopsy will be completed in 12 to 14 weeks, the agency said.