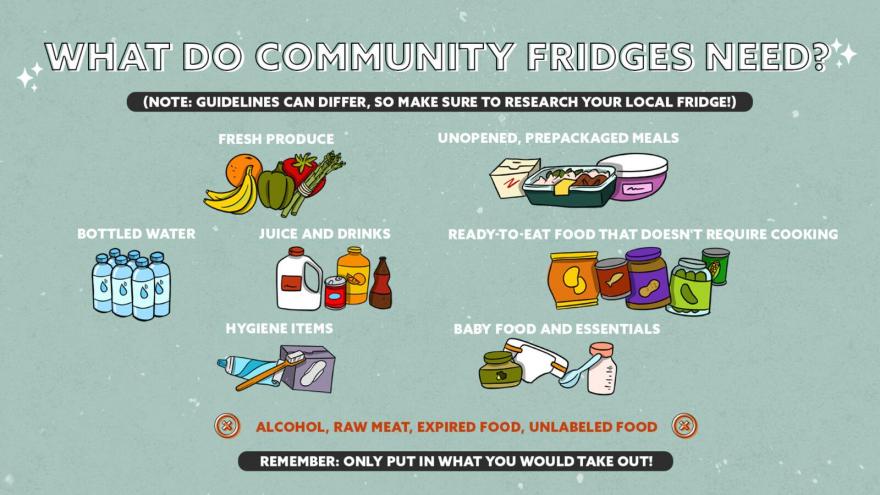 Community fridges is a growing movement of mutual aid that supports neighborhoods in need while tackling food waste and turning a keen eye to the larger causes of food insecurity.

(CNN) -- The world has a lot of problems. Big problems, with big consequences that require big solutions. In the midst of all this "bigness," the average person can end up feeling too small to offer anything of value.

They can forget that, sometimes, the path to somewhere better starts small. It can start with a single arm of groceries, driven down the road, so a neighbor can have a meal. No one has to wait for permission, no one has to worry whether their efforts are worthy.

They can just do it.

That's the philosophy behind community fridges, a growing movement of mutual aid that supports neighborhoods in need while tackling food waste and turning a keen eye to the larger causes of food insecurity.

In 2020, Latisha Springer was feeling, well, like most people felt that year.

"It was a difficult summer. It was really negative and overwhelming, and I was tired of thinking about how messed up everything was. I wanted to do something," she tells CNN.

Springer had learned about community fridges while living abroad in Europe. The practice first took hold there in the 2010s: A refrigerator, stocked with food by community members, for anyone to use at any time regardless of need or economic status.

"I thought it was a cool concept -- eliminate the middleman; direct, open access."

Then she thought some more. Why not here, in Atlanta? Why not now?

It all came together quickly, Springer says.

Though no one would call this kind of work easy, exactly, resources were simpler to obtain and people were more interested in contributing than Springer thought they would be. She created an Instagram account and posted some requests. A local business offered to host her first fridge, and then provide her some working space. Two years later, Springer's Free99 fridge project has four locations with two others coming soon, supported by a web of contributing businesses and hundreds of volunteers.

Springer quit her job and now puts her Master's Degree in Business to use coordinating several daily wellness checks and food drops, arranging donations from suppliers, and organizing other community activities like neighborhood clean-ups. Keeping up with volunteer scheduling and maintaining stocks and transportation is constant work, but Springer says she knows she can always rely on the people around her.

"Our community is amazing," she says. "Whenever we need something, there's always someone who knows someone who can get it done."

The concept of community fridges in the US caught on as need that had always been present became more visible during the early months of the pandemic. That's when Eric von Haynes, an organizer and artist in Chicago, began working on a community fridge program with local mutual aid groups. The Love Fridge Chicago now has more than 30 locations across the city, supported, in part, by grant money and the efforts of Love Fridge volunteers and other local aid coalitions.

"When we began, I wanted to make sure this was sustainable," Von Haynes tells CNN. "Food scarcity didn't start with the pandemic and it isn't going to end when the pandemic ends. We want to make sure we create relationships that last."

Free99 Fridge and The Love Fridge are good examples of how the same seed, once planted, can grow in different ways. Springer grew Atlanta's Free99 fridges through social media and word-of-mouth, with no background in this kind of work. Already a figure in the fertile mutual aid landscape of Chicago, Von Haynes began a new program that immediately intertwined with related programs. Both have flourished.

Mutual aid, which community fridges exemplify, differs from charity because there is no decision on who gets what and why. These programs tend to be run on a "by the people, for the people" mindset and prioritize boots-on-the-ground volunteering over donations -- though both help. Mutual aid also allows for people to communicate what they need, rather than being told by contributing parties.

Understanding the potential of something like this, like a refrigerator anyone can contribute to or take from, requires a lot of unlearning.

"I had a lot of pushback when I got started like, 'Who's going to monitor who's taking too much?'" Springer says. "But what's 'too much?' How do we know what people need, what they are using it for?" She says her "fridge friends" -- those who use Free99 locations -- often tell her they're helping out neighbors in need, or making sure their family members are taken care of.

Other questions abound, asked with skepticism or concern: Who looks after the fridge? (Volunteers, who perform wellness checks and maintenance.) What about sanitation? (Volunteers, again. Plus, organizers try to make sure their fridges are on private property to avoid municipal conflicts.) What if someone puts something bad in there? (Fridges are checked regularly, and Von Haynes says community fridges are protected by the Emerson Act, which shields food donors from civil and criminal liability.)

There are rules, of course, for the kinds of things community fridges accept. The bottom line? Don't put in what you wouldn't take out.

"That comes down to the way that people have been programmed," Von Haynes says. The reality is, community fridges help reduce food waste (another "mutual" benefit in mutual aid). Not everything that approaches its expiration date is bad; it's just less likely to sell. Plus, retailers and restaurants often have a surplus of perfectly good food that, for one reason or another, can't be sold.

The US Department of Agriculture estimates food waste makes up 30% to 40% of the country's food supply. That means food scarcity often hinges on what people can afford and access, rather than the supply that's actually available. Community fridges help break down that barrier, whether it's with an apple or a $9 bottle of cold brew.

That prospect can be uncomfortable -- separating availability from value, and value from cost. It can inspire defensiveness, a reflexive retreat into the belief that, because things are the way they are, it is the way they should be.

"While we do want these fridges to serve those in need, we want to change that idea culturally. It's important that we move away from the idea that every action is need-based," Von Haynes says. "We offer resources without gatekeeping."

"Food is a human right," he continues. "And people deserve good food."

Community fridges may start as something small and singular, but even from the beginning, they are rooted to larger systems of social justice and activism.

"You can't talk about food insecurity without talking about poverty, unemployment, housing and healthcare," Springer says.

Mutual aid programs and issues of racial justice are deeply interwined, dating back to the Black Panther Party's Free breakfast program in the 1960s, which is said to have been used as a template for the USDA's school breakfast program. Community fridges are often decorated by local artists, splashed with bright messages of nonviolence and solidarity.

In Atlanta, each of Free99's fridges is named after a Black community member who was killed by police or in police custody: Breonna (Taylor), Sandra (Bland), Elijah (McClain), Tamir (Rice). In Chicago, The Love Fridge's locations and work intersect with abolitionist groups and important locations around the city where community action is already happening.

Springer says making relationships with the people who use the fridges is the most powerful part.

It's disgusting the way unhoused people, people in need are treated. These are our neighbors, and it's like people don't want to acknowledge they exist." she says. "So our friends are grateful for the food, but they're also grateful for not being invisible."

"I think people are realizing that, ultimately, the only way we can make it is to rely on each other," she continues. "This is how we should treat each other and this is the humanity with which we should operate."

In caring hands, with the roots of a whole community running underneath, a single fridge can become a network of them. And together, they can become something more.

It takes work, yes. It takes time. But Springer and Von Haynes are showing it's possible.