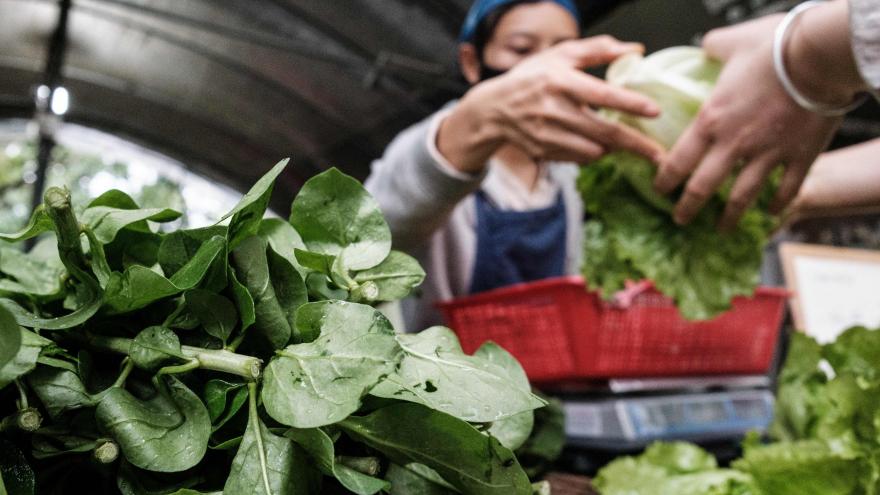 By Jessie Yeung, CNN
(CNN) -- As the novel coronavirus pandemic shuts down businesses globally and sends countries into lockdown, the disruptions are threatening to cut off supply chains and increase food insecurity.

The issue, however, is not food scarcity -- at least, not yet. Rather, it's the world's drastic measures in response to the virus.

Border closures, movement restrictions, and disruptions in the shipping and aviation industries have made it harder to continue food production and transport goods internationally -- placing countries with few alternative food sources at high risk.

Airlines have grounded thousands of planes and ports have closed -- stranding containers of food, medicine, and other products on tarmacs and holding areas, said the UN Conference on Trade and Development on March 25.

Heightened instability in global food supply will affect the poorest citizens most, warned the UN's Committee on World Food Security (CFS) in a paper last month.

Even private companies and organizations have called for immediate action to address the looming food catastrophe.

"Governments, businesses, civil society and international agencies need to take urgent, coordinated action to prevent the COVID pandemic turning into a global food and humanitarian crisis," said an open letter to world leaders from scientists, politicians, and companies like Nestle and Unilever.

China was worst-hit by the virus in January and February, when thousands of new cases were being reported each day.

The country imposed lockdowns, suspended inter-provincial trave and ordered residents to stay at home, disrupting business in virtually all sectors.

China has faced severe food shortages before; historians estimate tens of millions of people starved to death in a famine caused by an economic campaign known as the Great Leap Forward, from 1958 to 1962.

But modern China is an entirely different country, with new technologies and wealth -- and it has been working for years to improve its food security, spending tens of billions of dollars this past decade purchasing major seed businesses.

These efforts appear to have softened the blow to the food industry this time around. The central government distributed $20 million in subsidies to revive agriculture, and invested in technology including agricultural drones and unmanned vehicles that could keep supply chains moving without human contact, said the FAO report.

When people did go into the fields to work, they wore government-provided masks and protective equipment, and were given disinfectant from local authorities, said state-run news agency Xinhua.

Even the country's dominant e-commerce market stepped in; provincial lockdowns and movement restrictions hampered the export and transport of goods, so e-commerce giant Alibaba set up a fund to help farmers find markets for their unsold products, the report said.

Australia exports about two thirds of its agricultural products and is a major supplier for the Asia Pacific region -- but this crucial trade is now under threat.

The aviation industry has been hit hard by the pandemic and international flights have been slashed. Fewer flights mean it's now more expensive to export food via air travel, said Richard Shannon, manager of policy and advocacy at Growcom, the representative body for horticulture in Queensland state.

"The industry is rapidly trying to find alternate routes," he said -- but some Australian farmers may try to find new buyers within the country instead of looking internationally.

This threatens the entire country's economy in two ways. About 14.5% of all Australian exports are food products, according to the Observatory of Economic Complexity (OEC). If farmers aren't able to export their goods, it could cost the country tens of billions of dollars in lost income.

The next best option is for farmers to sell their goods within Australia -- so all these agricultural products that typically are sent out into the world are suddenly entering the domestic market. This influx could put a lot of pressure on the market, and affect the price at which these goods are sold, Shannon said.

The government stepped in with emergency aid, announcing it would spend 110 million Australian dollars ($67.4 million) to increase the number of flights and help exporters transport their goods to key international markets.

But the pandemic has also posed other problems. Winter is arriving in Australia -- which means seasonal workers nationwide are flocking to Queensland, which grows more than 90% of the country's winter vegetables. Suddenly, small rural towns are booming with people arriving from out of state, looking for work on farms.

With such a high volume of people living and working in close quarters, just a handful of infections could spell disaster for farm operations -- but these farms can't just shut down for 14 days, the way businesses in other sectors might.

Queensland authorities and growers are now working to create protocol that can both keep workers safe and prevent farm shutdowns, like staggering lunch shifts to reduce the number of people in close contact.

Hong Kong and Singapore can buy their way out

Hong Kong and Singapore are two of Asia's major financial hubs -- but with limited farmland, they both have tiny agricultural sectors and import more than 90% of their food, according to government websites.

Despite this, they are in little danger of food shortages, experts say. For starters, they both have a main supplier; Hong Kong imports the vast majority of its food from mainland China, and Singapore imports from Malaysia. As long as these major sources stay steady, food staples will be secure, and halted imports from other countries won't make too big an impact.

Even when China was in the depths of its coronavirus crisis, food still flowed across the border into Hong Kong, said Jonathan Wong, director of the Institute of Bioresource and Agriculture at Hong Kong Baptist University.

Some niche products like oysters from France may be cut off for a while -- but these aren't daily necessities, and Hong Kong can replace the supply through other countries, said Wong.

And although Malaysia is currently under a nationwide lockdown, the food industry is one of the essential services exempt.

"Our supply chains are intact and there has been no disruption to Singapore's imports," said the Singapore government in a statement after Malaysia announced the lockdown.

Even if there was any kind of disruption, Singapore has two months' worth of produce stockpiled, and has diversified its sources so it isn't wholly reliant on Malaysia, said Singapore Trade and Industry Minister Chan Chun Sing on Facebook.

The Pacific Islands are at highest risk

The crucial thing that sets places Singapore and Hong Kong apart is that they have the resources to buy their food from alternate sources if any supply lines are compromised. But that isn't true for import-reliant, low-income countries like the Pacific Islands.

"The most at risk are those without solid economic bases, like Kiribati or Micronesia or Tuvalu," said David Dawe, FAO senior economist.

Some developing countries such as Laos or Myanmar produce enough staples including rice that they can survive an import drain -- but these Pacific Islands are so small that they don't grow much of their own food, said Dawe. They are "remote anyway to start with and rely heavily on imports."

These islands typically rely on tourism for much of their income -- but nobody is traveling in the midst of a global pandemic. The loss of tourism revenue, the lack of domestic food production, and the lack of a financial or food safety net mean these countries are "really getting hit from both sides," said Dawe.

"For some people, it might literally mean no food on the table," Dawe said. "It might mean trying to borrow money from people at high interest rates. It may mean having to go all the way back to your village, where in some cases you have to walk if public transport is shut down, to ride it out together with your family."

What the world needs to do

The UN is now urging affected countries to implement emergency measures domestically, as well as work together on a global level to protect food supply.

"The world was awfully unprepared for the pandemic," said the FAO report.

"But by keeping the gears of the supply chains moving and actively seeking international cooperation to keep trade open, countries can prevent food shortages and protect the most vulnerable populations."