The Dayton shooter was armed with a mask, bulletproof vest and hearing protection 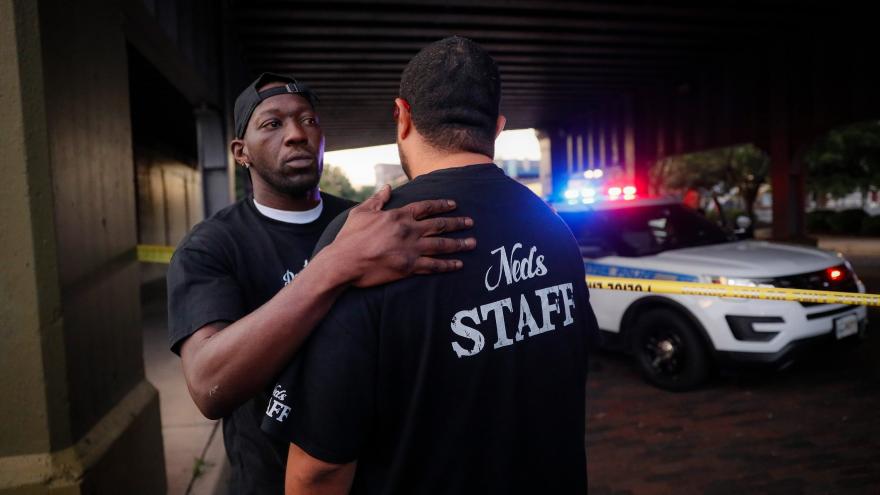 (CNN) -- A gunman who wore a mask, bulletproof vest and hearing protection was killed by police within 30 seconds of opening fire on Sunday in a popular nightlife district in downtown Dayton, Ohio, authorities said.

Police Chief Richard Biehl released a timeline of the early-morning shooting that left nine people dead, including the gunman's sister.

Biehl said the shooter opened fire with a .223-caliber high-capacity rifle with 100-round drum magazines. Officers patrolling the Oregon District as the bars were closing shortly after 1 a.m. heard the gunfire and saw a large crowd running away, the police chief said.

"The officers immediately advanced toward the gunfire and within approximately 20 seconds, they engaged the suspect, who was actively firing and attempting to enter a crowded liquor establishment," the police chief said.

"The threat was neutralized at approximately 30 seconds of the suspect firing his first shot," Biehl said.

Biehl released a frantic 911 call from the shooting as well as surveillance footage and the names of the six officers who responded to the shooting.

Twenty-seven other people were injured when Connor Betts, 24, fired dozens of shots. The motive remained unclear.

Betts, his sister and a male companion had arrived in the same vehicle but they separated at some point in the evening, the police chief said. Police are trying to determine the shooter's whereabouts after he and his sister separated.

The event followed by 13 hours a shooting that left 20 dead in El Paso, Texas.

No evidence so far of a bias crime, police say

During the search, authorities found writings linked to the shooter that show he had an interest in killing people, two federal law enforcement sources told CNN. A preliminary assessment of the writings did not indicate any racial or political motive, the sources said.

"We do not have sufficient information to answer the question everyone wants to know: 'Why?'" Biehl said.

He added: "We have no evidence [that] suggests that there is a bias motive in this crime at this time"

Matt Carper, assistant police chief, said speculating at this point would be premature.

"We're always looking at what could have motivated such a horrific action as this, and like I said this morning, we're interviewing dozens of people and going through a lot of different electronic evidence, other evidence to try to determine that. We don't have that answer yet," Carper said.

Betts began shooting as he made his way toward a bar called Ned Peppers, said Deb Decker, public information officer for Montgomery County.

Someone from Ned Peppers grabbed the barrel of the rifle, and the shooter "picked up a handgun and was willing to continue shooting," Decker said, when police arrived and killed the shooter, who wore body armor.

Biehl said he did not have information to verify that account.

No officers were injured, Carper said.

Mayor Nan Whaley said: "I really want to -- think about that minute. The shooter was able to kill nine people and injure 26 in less than a minute. And if we did not have police in the Oregon District and the thousands of people in the Oregon District enjoying their Saturday evening, what we could have had in this city," she said.

"The question has to be raised, why does Dayton have to be the 250th mass shooting this year?"

"There's nothing in this individual's history or record that would have precluded him from purchasing that firearm," Biehl said.

The city identified the nine people killed in the shooting:

Police did not provide information about the Betts siblings' relationship.

Bellbrook Police Chief Doug Doherty said he has been in touch with Betts' parents, who are not ready to talk about the deaths of their two children.

"They are victims, and we're treating that as such -- them as victims," he said, according to CNN affiliate WLWT.

'Bodies all over the place'

Graham Hunter, 24, of Dayton, said he and four friends arrived just as the incident was over and immediately came upon the body of the shooter outside.

"Everyone was panicking and running around," Hunter said. "After the shooter was dead, everyone was just crying and stuff," and he saw "bodies all over the place."

A police officer told him and his friends to go into Ned Peppers.

He said he and his friends consider the area a safe, fun place to hang out on weekends, where many people walk around outdoors and enjoy patios at restaurants and bars.

The district was to open Sunday afternoon, the mayor said. A vigil is planned for 8 p.m. ET.

A deadly end to a deadly week in America

The shooting in Dayton was the fourth similar incident across the country in the past week. At least 34 people were killed in total.

Saturday morning In El Paso, 20 people were killed and 26 injured when a gunman opened fire at a shopping center. Authorities are investigating a racist, anti-immigrant screed they believe was posted by the suspect.

He has been identified by three sources as Patrick Crusius, a 21-year-old white man from Allen, Texas.

Tuesday in Mississippi, a shooting at a Walmart left two employees dead and a police officer wounded.

The shooter had been enrolled at Sinclair Community College in Dayton but was not enrolled in the summer term, the school's president said in a statement.

"Our hearts are broken for so many members of this wonderful community this weekend. A senseless tragedy occurred in our community and our thoughts are and will remain with the victims and their friends and families," President Steve Johnson said.

A friend, Brad Howard, saidConnor Bettswas quiet and kept to himself.

"He was a really nice kid," Howard told CNN affiliate WHIO. The two grew up together, he said, and knew each other for more than 20 years.

"It's a kick in the teeth" to the Bellbrook neighborhood, Howard said.